How did that alpha-bat soup taste?

The various nerd-news channels that I follow on YouTube have been abuzz with the recent news that Ruby Rose "quit" CW's Batwoman, and the rumour mill is running at full tilt trying to figure out what exactly happened with the whole situation:

As ME points out in the first video, the statement released by Warner Bros., DC, and the CW is far too terse and blunt to support the notion that Ms Rose quit on her own. It is far more likely that she was fired.

Why, exactly, was she fired, then?

Well, the fact that the series is appallingly bad probably had a lot to do with it: 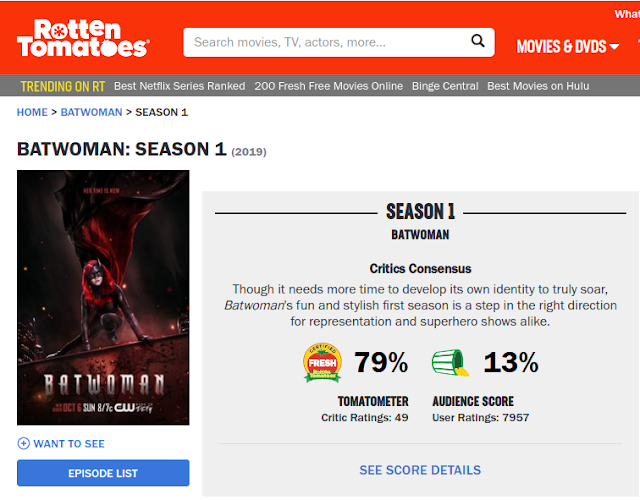 Well now. Look at that - the critics generally like this flying rat-posterior of a show, but the audience absolutely HATES it.

That might have something to do with the fact that the showrunners made it transparently clear, from the very first trailer, that identity politics would be at the heart of the show and that the alphabet-soup people of the LGBTQWTFISTHISSHIT crowd would be pandered to as much as possible.

Meanwhile, the people who pay for shows like this - y'know, the actual FANS - could go take a flying leap, without a grapnel.

Yeah. Let's pose a question to the showrunners - how did that strategy work out for you, dickholes?

This commercial failure is not accidental and it is not at all undesirable, at least as far as the creators of the show are concerned. Most of the Longtime Readers here will know the truth of this and require no further explanation from me, but for the newer guys, here's a simple primer:

Social Justice Warrior types who create this sort of identity politics-driven garbage don't care if it makes money or not. They aren't interested in creating anything new or innovative. They aren't capable of doing anything useful with their lives. So what they end up doing is taking existing properties and ideas, and twisting them to serve their own agendas.

Remember - commercial success is not required for these people. They don't care about it. They would quite happily see these ventures fail, as long as they can indulge in their SJW fantasies and signal their virtue.

The thing about Batwoman is that it has problems at every level.

Take Ms Rose as an actress, for instance. I don't watch much TV, so I have no idea whether she was any good on that prison show that she was famous for, but I did see her in John Wick Chapter 2. That was probably her best film role - and you want to know why?

Because she never opened her mouth even once, and got killed by Badass Keanu Reeves near the end.

Everything that I have seen of her outside of movies and films indicates that she is thoroughly unpleasant. That tends to be a sad reality of lesbians in general - the ones who aren't fat and ugly, tend to be butch, overly masculine, and quite nasty to deal with.

Then there is the fact that the show itself is, as I stated earlier, all about identity politics. Go check out the trailers for it. Try to watch them all the way through, if you can, without either laughing out loud in utter disbelief at the idea that a 120lb woman could possibly take on a man twice her size and three times as strong and beat the shit out of him, or being thoroughly disgusted by the ways in which the showrunners openly insult the Batman canon and legacy.

On top of that, the showrunners said in their statement that they would find someone else from the LBGTQWTFISTHISSHIT community to fill in the role in time for season 2 of the show. Given that Ruby Rose got slammed for not being diverse enough by the Twitterati, the only likely course of action is for the show to hire Michelle Rodriguez, which would tick off a whole bunch of virtue-signalling boxes.

And that's before we get to the third major problem facing the show:

Nobody likes it and nobody cares about it.

Audiences obviously hate it. They're tuning out in droves. They just don't want to watch it.

Even when the lead actress suffers a life-threatening injury, and a crew member is actually paralysed on set, the average TV watcher simply can't be arsed to care about the show.

Which means that, in the end, all of the virtue-signalling is for naught.

That's a very good thing. The faster and harder that these idiotic ventures fail, the faster the bean-counters will get the message. The danger of SJWs lies in their ability to get away with a lot of nonsense for a very long time - but ultimately, the mighty dollar talks louder than anything else, and even the most terminally stupid corporation will either face collapse or get rid of them.

The good news for us is that either scenario benefits us.

None of us care about Batwoman because the show is garbage and nobody is interested in watching shows about a lipstick lesbian playing dress-up and doing a man's job, only without the competence, skill, knowledge, or experience. We don't need to watch TV for that shit - this is our daily experience with our co-workers!

If the CW collapses because of these continued idiotic decisions, that's great. Money and resources get freed up to be used more profitably in other applications.

If the show is cancelled, that's great too. It will send a very loud and clear message to everyone in the industry: make money, or get out. And make no mistake: this show will be cancelled eventually. It's simply too badly written, too ugly to watch, and too stupidly executed for anything else to happen.

There is one final point to make here about the alphabet community.

They keep claiming that people like us - Christians who believe in that which is good, beautiful, and true - are "homophobic" or "transphobic" or whatever, as if we are afraid of queers and mentally ill freaks.

We are not afraid of them in the least. Homos and trannies can't do much to the rest of us. We outnumber them roughly 50-to-1; their very existence in a society that supposedly hates and fears them is testament to the fact that they are surrounded by people who quite happily tolerate their existence.

Look, if you're gay, or a mentally ill tranny, or "intersexual", or "pansexual", or "sapiosexual", or "two-spirited", or whatever - people like me aren't afraid of you. We just think your way of life is disgusting, and we want nothing whatsoever to do with you. We're happy to let you exist and go about life and live in peace. You go live your life as you see fit; what you do behind closed doors is your business and may God bless you in all of your variety.

But don't try to push that shit on us and call it normal. It isn't. We don't want it, we find your sexual and lifestyle practices utterly revolting, and we have no interest whatsoever in supporting you or anything that you do.

And with that said - let's hope that Batwoman fails spectacularly and as soon as possible. It will be an abject lesson for the rest of the idiots who keep pushing this nonsense upon us.