Here we are on a Friday again, and it is an unusual day because it falls on the 13th of the month. Now, I've never quite understood why this is considered an "unlucky" day. It is merely an inevitable consequence of how the calendar works. In fact, most years have two days that fall on Friday the 13th, so if this is an "unlucky" day of any kind, then bad luck is rather common.

It has certainly been a very unlucky week by most common reckoning. The mucosal, viscous, and downright icky blessings of Corona-chan continue to spread throughout Europe and around the world, and are putting national emergency response systems through severe tests that, frankly, some nations are simply failing outright.

His Most Illustrious, Noble, August, Benevolent, and Legendary Celestial Majesty, the God-Emperor of Mankind, Donaldus Triumphus Magnus Astra, the First of His Name, the Chaddest of Chads ever to Chad across a stage, has responded with decisive yet calm toughness by cutting off all flights from Europe. That is the right thing to do, but it is hugely unlucky for millions of travelers between both the USA and Europe.

And Europe itself appears to be coming apart at the seams as individual countries respond in very different ways to the outbreaks - which, I remind you, are nowhere near as lethal as we are being led to believe.

But, seeing as it is Friday, we can happily ignore all of that malarkey - and by that I don't mean in the style of Creepy Uncle Joe Biden, whose village is quite evidently phoning around reporting that it is missing its idiot - and get on with the serious business of enjoying that which is good, beautiful, and true.

And this week's lady is certainly beautiful - though "good" and "true" would likely be a major stretch.

Her name is Anjy Shamo (weird name, I know), aged 27, from Detroit, Michigan. However, her bio indicates that she was actually born in Amman, Jordan, of Chaldeans (so she's likely a Christian, albeit a very loose one).

Unfortunately, she also has a rather large tattoo on her left forearm. The fact that it consists of a Cross and other holy symbols is small comfort. I've picked pictures where that nonsense isn't apparent, but it is there nonetheless.

Happy Friday, gentlemen. Stay away from Camp Crystal Lake, don't go near anyone wearing a hockey mask and carrying a big-ass machete, and if you do happen to find yourself being chased by a big scary hulking choir-boy with a huge bladed weapon, remember: bringing a knife to a gun-fight is an astonishingly stupid idea.

In other words: eat, drink, sleep, lift, shoot, pray, repeat. See you on Monday for the CRUSHING!!! 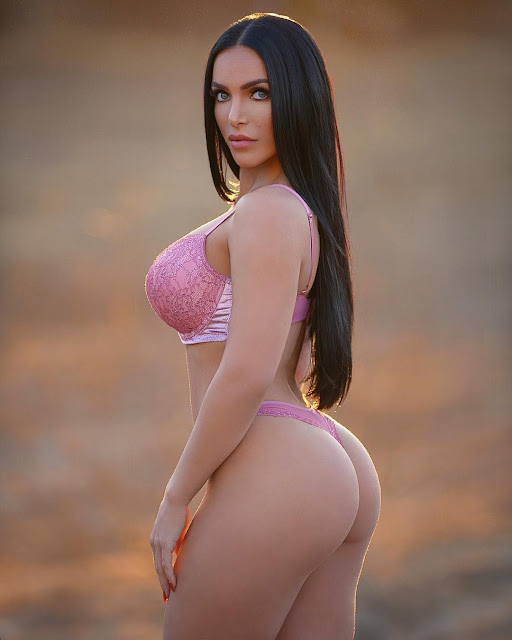