With gyms closed down pretty much everywhere interesting, even as the weather warms up and the northern hemisphere begins to come back to life after winter, many of us are confined to quarters and sitting and waiting for all of this madness to blow over. Unfortunately, governments around the world are taking this as an opportunity to impose ever greater restrictions on everyone's lives, increasing the fear, uncertainty, and doubt, and making it nearly impossible for anyone to get any sense of hope or optimism.

One of the rare exceptions to this is of course His Most Illustrious, Noble, August, Benevolent, and Legendary Celestial Majesty, the God-Emperor of Mankind, Donaldus Triumphus Magnus Astra, the First of His Name, who has made it pretty clear that he mostly wants the country open for business by Easter.

And that is a VERY Good Thing.

The reality of this virus is that even under absolutely ideal conditions, where every single person in a population can be tested, the overall mortality rate is about 0.2% of those infected. Here's an article from Power Line to explain it:

The best evidence of the threat the virus poses is found by the unintended experiment of the Diamond Princess cruise ship. There were over 3700 passengers and crew on the vessel. Everyone of them undoubtedly had constant, heavy exposure to the virus in close quarters. Using gold standard testing, less than 20% of the 3711 people were positive, meaning they were actually infected. And out of those positive tests, a little over half were actually symptomatic. 8 people died, or about 2% of those with symptoms or .2% of percent of the vessel population. The cruise ship population skewed older than a general population and was therefore more susceptible and obviously had far more contact with the virus than the general population will.

Now that mortality rate is of course highly variable. But even if the true mortality rate is significantly off, does that justify keeping entire economies in lockdown, thereby destroying the livelihoods and jobs and bank balances of hundreds of millions of people?

And that's before we get to the mental toll of this whole outbreak. People everywhere are going stir-crazy. The fact that gyms have closed down, for instance, means that iron addicts like me have to stick to bodyweight workouts, if anything, to keep in shape.

And bodyweight workouts are - there's no other way to put it - BLOODY BORING.

So, to get your minds off of the endless repetitions of push-ups, sit-ups, squats, leg raises, and other silly things that you have to do in order to stay healthy, here's your classy Instathot to end the week.

Her name is Katelyn Runck, age 29 from North Dakota. She's known primarily as a fitness model and gym bunny who started out as a model on the catwalks before becoming a "fitfluencer" - whatever the hell that means - and female physique bodybuilding competitor. She's actually quite famous in the latter circles, apparently, with achievements in the WBFF. And she's the Instathot for the weekend to keep your spirits up and your mood jovial.

Happy Friday, boys. Enjoy the weekend, get some rest, stay away from Ye Olde Phartes who are coughing and sneezing - and make sure they stay away from you if you're the one hacking and spluttering - and stand tall with your chin up. Things will get better, we will get through this, and when it's finally all over, we're going to wonder why we were ever so scared and crazy in the first place. 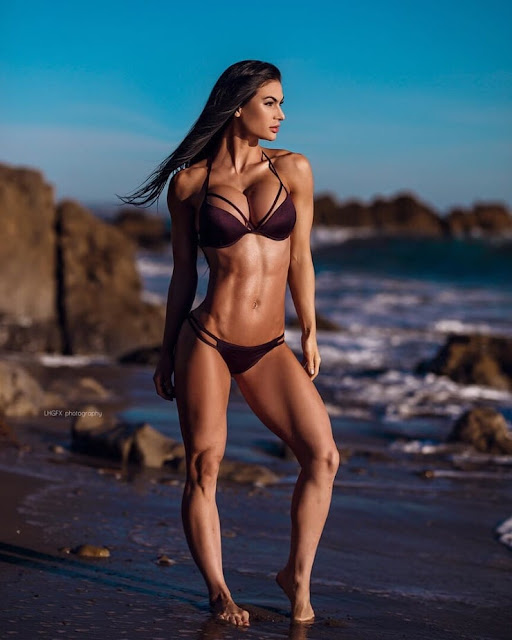