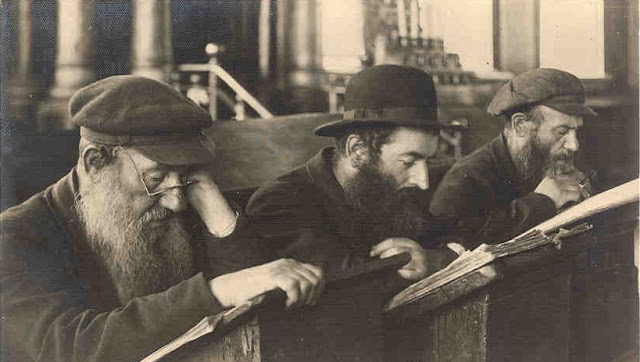 Here follows the full, mostly unedited (except for grammar and some spelling - I'm pretty persnickety about such things) comment by our friend Dawn Pine, a.k.a. The Male Brain, to my post about the realities of modern Talmudic Judaism, which were in turn drawn from a very long article by Ron Unz. He in turn drew on the works of the late Dr. Israel Shahak, a very misunderstood human rights activist and campaigner who was a longtime thorn in the side of the Israeli political establishment.

Dawn Pine is an Israeli Jew who saw fit to respond at considerable length to my post, with a number of interesting details that I did not know before. If you are not familiar with his work, check out his (pretty extensive) writing for Return of Kings from back in the day.


I am genuinely very grateful to Dawn for taking the time and trouble to post such a lengthy and well thought out set of comments. This is precisely the sort of commentary and discussion that I want to encourage within this blog. As I have stated many times on this blog, I have a real personal fondness for Israeli Jews and a deep respect and love of Israel as a country, due in no small part to the fact that, unlike quite a lot of American conservatives, I've actually been there - at the invitation of real Israelis.

I will respond to specific points raised herein regarding Christian protections, and persecutions, of Jews, at a later date, when I have a bit of time to write down some cogent thoughts on the subject. Suffice to say that the history of this particular dark stain on the Christian conscience is not nearly as well known as it should be.

The words from my original article are in bold italics below, Dawn's responses are in plain text. Wherever I have done more than simply adding or subtracting a few letters, i.e. changed a word or two, my edits are made clear in [brackets].

I've been following your blog for the past year, and have read all (and I mean all) of your posts. I agree with you on 90% of what you write, I want to correct you on some of what is written in this post.

[Thanks! And I appreciate corrections and clarifications - if I am wrong about something, I want to know as fast as possible so that I can point myself in the right direction.]

My background: I'm an Israeli Jew, who practices very little of my Mitzvot, yet have a good understanding on my religion and am familiar (to some extent) with the Talmud.

To begin with, as Ron Unz takes great pains to point out, the Torah and the Talmud are two quite different things.

I know this may come as a shock, to those who are less familiar with Judaism, but it is no news. The Talmud is completely different from the Torah. And I mean completely!

The Torah is a book that has been written more than 2500 years ago, and relates to a country and people having an Immanent God with them. This is not the case after the fall of the second Temple (God has "moved" up to the heavens and no longer resides in the world). You may have a different opinion of God, but that's how most Jews believe.

Among large portions of the faithful, the Talmud is supplemented by the Kabala, another large collection of accumulated writings, mostly focused on mysticism and all sorts of magic.

That's a misconception. The Kabala explains the world in mystical terms and provide "esoteric" know-how. The Talmud is a "set of rules" based on case studies and interpretations. They, most of the time, complement and not supersede.

Such Jews do not worship a monotheistic God, but instead actually worship a number of different entities, both male and female.

That is [an old] argument. The main core belief of Judaism, which is based on one of our oldest "battle cries"/"identifications" is " Hear, O Israel: The LORD our God, the LORD is One " (Deuteronomy 6:4). It is confusing that Judaism acknowledges divine entities, both male and females, as well as good and evil. You sometime "acknowledge the devil". (Literally). This is usually to avoid consequences in a specific context or in order to help a poor soul. There is [no] worship in the Kabala, but there are instances in which one may use devils (highly not recommended).

Obedience to ritual is far more important than understanding the point of those rituals.

Correct. The origin is Mount Sinai sighting of God. "All the words which the Lord hath spoken will we do" (Exodus 24:3). The Hebrew phrase for this is "Na'aseh VeNishma" which means "We shall do (first) and then listen (understand)". In Judaism you sometimes do not know WHY, but you still need to practice.

Some of these rituals are designed to trick either God, His angels, or Satan into thinking that the devotees are doing something other than what they actually are.

That is again, a misconception. Tricking the devil – Yes. No one tries to trick God. Satan – Yes.

Spells, curses, magicks, and various other forms of jiggery-pokery are actually quite common to Talmudic Judaism.

Correct. The Talmud was signed (= finalized editing) about 1500 years ago. At that time those were part of Judaism. Not proud of it, but it is part of my religion. Guess what? It is also part of Christianity [until recently]. Don't see the problem.

Incidentally, I have never quite understood why Jews insist on giving God an actual name. In the New Testament, at least the bits of it that I have read, the name "Yahweh" doesn't come up at all.

If one of my readers might be inclined to explain to me just why it is that Jews call their version of the Lord "Yahweh" or "Jehovah", rather than "the Lord", "the Father", or simply "God", as Christians do, I should be much obliged.)

Again, misconception. We call our God many "names" – The Lord, God (in Hebrew it is plural word – ELOHIM or Elokim) , He who is Blessed (HAKABA). No one in their right mind today uses "Yehowah", unless he or she wants to shock the audience.

Indeed, judging by the polytheistic nature of actual Talmudic Judaism, and the fact that it is so obsessed with ritual and superstition, I am forced to conclude that this particular strain of Judaism is really a lot more like Hinduism than it is the religion described within the Old Testament.

I understand why you think so, but it is wrong. It completely unlike Hinduism (know a little bit about it). Judaism is not polytheistic in any way.

Put simply, Talmudic Judaism could easily compete with Islam for first place in the Bigot Races.

I know you'll be surprised, but I agree. This is a classic "Gamma" attribute of Jews. Behind it are 1800 years of persecution and mind blowing attempts to preserve an old race/religion against tremendous forces. Not an excuse, but an explanation. This part of my religion needs serious reform.

As Dr. Shahak points out and Ron Unz amplifies, honest Talmudic Jews make no bones whatsoever about their belief that the rest of us, the non-Jews, the goyim, were put on this Earth to be slaves and servants to Jews, and that we are little better than "beasts in the shape of men".

True. Reminding you that the Talmud was signed some 1500 years ago. Christians at that time were anything but tolerant, until about 200 years ago.

the Catholic Church in particular has claimed that the Jews are God's chosen people and are a protected group, ever since at least the time of Pope Gregory the Great, who issued a Papal Bull in reaction to the persecution of Jews in Palermo that stated very clearly that Christians have a religious and moral duty to protect Jews.

That's new for me. However somehow Jews were persecuted repeatedly and nothing of the sort helped them most of the time.

Ultimately, the question of what and how Jews worship is, of course, up to them. The problem is that so many of the Jews remain so ignorant of their own faith - and of how far the Talmudic orthodoxy has strayed from the actual, literally written-in-stone Word of God.

You'll be surprised again, but I somewhat agree. Most Jews are secular and don't bother to study their religion and understand it.

Just to sum it up:

I believe some of what is written is incorrect. I may be off, as my understanding may be lacking. Judaism is not polytheistic, but houses divine entities, both good and bad as well as good and evil.

As per redemption and salvation – I believe (and it is my belief) that a great reform of Judaism will come, but probably only in the next generation.


Didact here again. As a final point - this graphic may help illustrate where some of the confusion arising over what Jews believe and which books they follow, due to the very many changes to the various books over the course of the last 3,500 years or so.

I make no claims whatsoever to its authenticity, other than to note that the dates in it line up pretty well with what Dawn Pine has noted above. 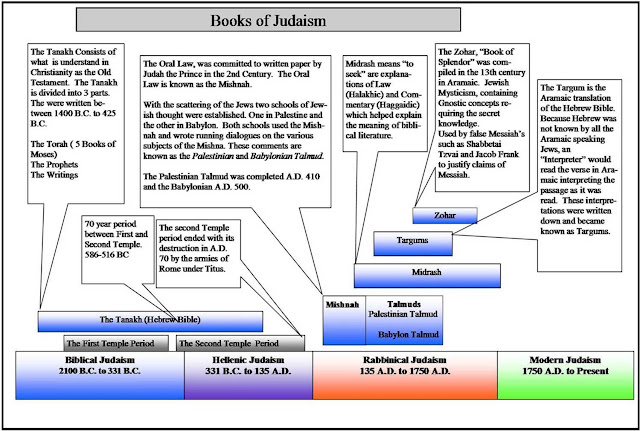