Boys, I have a bit of a confession to make.

No, I'm not gay, I'm not about to convert to Islam, and I'm not a closet SJW. (Which if you think about it all kind of amount to the same thing.) Don't be stupid. Otherwise I wouldn't be posting this latest entry in everybody's favourite part of my blog.

(Though I am currently in a country full of what appear to be closeted homosexuals - and, trust me, that is NOT fun. Every time I go to the gym, the trainers are there holding hands, massaging each other, and generally feeling each other up. It's phucked up on a scale that boggles the mind.)

What I actually wanted to fess up to was the fact that this week's edition of hawtness was supposed to feature a girl from Finland. The reason for this is that the God-Emperor and the Neo-Tsar met in Helsinki earlier this week, and that summit of awesomeness resulted in both a very constructive dialogue between two of the Chaddest Chads ever to Chad across the Earth, and a complete and total liberaltard media meltdown on a truly epic level.

And I looked upon it all, and I saw that it was good.

So I figured I might as well honour the summit between the two great men by posting up some pictures of a hot Finnish Instagram model.

Unfortunately... there do not appear to be very many such creatures in existence.

Seriously, take a look at this site containing a bunch of "hot" Finnish women. Or try going to Instagram and lookup the #finnishgirl tag. You will find almost no cute girls in either case. It is all a parade of tattooed hambeasts with bad hair and ugly faces - even the best of them top out at about a 7.

So... I had to resort to my fallback option. Which is to post up yet another set of images of a really hot Russian chick.

In this case, it's a hot Russian chick who has been featured here once before, albeit quite fleetingly. She is in fact very hot and quite famous... mostly because she is hot and famous, and no, that's not a typo, that is literally what Svetlana Bilyalova is known for.

She is an Instathot "fitness model" - so you all know what that means - and judging by her Instagram page, she has spent plenty of time in Dubai. (Yep. We're all thinking the same thing, pal.)

Still and all, she is very easy on the eyes.

Enjoy the weekend, lads. Thank God for the God-Emperor and the Neo-Tsar. May they both lead their respective countries toward amity and friendship, and may the SJWs continue to scream incoherently into the heavens and make complete asses out of themselves. 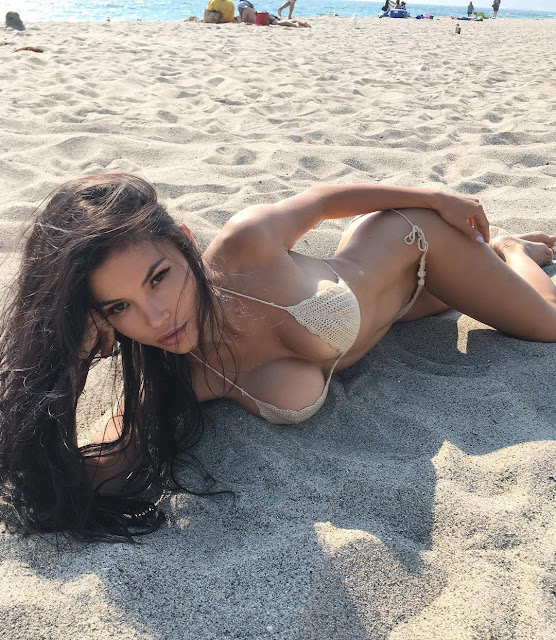