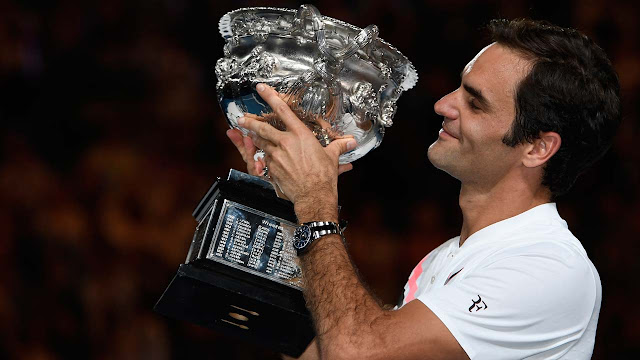 Just when you thought that Roger Federer's impossibly long list of records and achievements could not get any more impressive, he went and won Grand Slam singles title number twenty earlier this morning (by our reckoning):

Being the rabid Federer fan that I am, I went to bed last night fairly confident that the GOAT would win this one, but I was nervous too. As tennis players age, particularly past the dreaded barrier of 30, they increasingly start losing matches that in theory they should have won easily. This has happened to Federer on more than one occasion in the last ten years at big events; hell, it happened at last year's ATP Masters final event in Shanghai.

However, this time, the GOAT was not to be denied.

It is obvious from the scoreline that Federer's level of play was up and down throughout the match. The first set was a lights-out-go-home sort of affair, the second was extremely tight, then Feds found another gear in the third, and somehow sort of lost the plot in the fourth as his serve simply stopped working properly.

But it was in the fifth set that Federer showed everyone why he is the greatest, and why, when it really matters, when everything is on the line, he can still find the grit and willpower needed to win.

The value of this title cannot be overstated. Roger Federer already was the all-time leader in terms of Grand Slam titles won, and by some distance; Rafael Nadal is back there with 16, then there is Pete Sampras with 14, and then Roy Emerson and Novak Djokovic with 12 each.

There was a time, however, when the idea that any man could possibly break Pete Sampras's all-time record of 14 titles seemed completely laughable and absurd. It was not even all that long ago- I remember quite well the day that Pete won his 14th, and last, title at the US Open in 2002. At that time, it seemed as though this was a record that could never be equaled, never mind beaten.

Just seven years later, Roger Federer came along at Wimbledon in 2009 and achieved the impossible.

And nearly ten years after that, Federer has laid down a marker that will itself be nearly impossible to beat. There is only one man on the men's tour who might be able to achieve 21 Grand Slam titles, and I seriously doubt that Rafael Nadal's body will hold out long enough to achieve that record.

Of course, I said something similar after Federer's victory at Wimbledon last year when I predicted that Rafa would not be able to win the US Open. We all know how that turned out by now. That just goes to show you how good (read: horrible) I am at predicting such things.

Nonetheless, Roger Federer is now fast approaching the number of Grand Slam singles titles held by Margaret Court and Steffi Graf. And that, in and of itself, speaks volumes about his sheer virtuosity and skill.

The women's game in tennis is much shorter in duration, of far lower quality, and features very few truly elite athletes when compared with the men's game. Women play best-of-three-set matches throughout the year, including at the Slams; the men grind through best-of-five-sets and are subjected to much harder wear and tear on their joints, muscles, and bodies.

There is a reason why the very top female players would not survive on the men's tour. Even Steffi Graf, the one woman that I reckon could at her peak give Roger Federer a real test, would find it nearly impossible to crack the top 50 on the men's tour.

It is because of this lack of serious competition that three women have all cracked the hallowed ranks of 20 or more singles titles. And now a man has come along and shown them all how much better the men's game is in the process.

Roger Federer has now been playing and winning for very nearly twenty years. He has won, on average, just about one Grand Slam title a year since turning pro. Nobody has a record like that on the men's side. And I seriously doubt that anyone else ever will.

We are truly blessed to be living in the age of Federer. He has shown us all how beautiful the game of tennis can be when given its fullest expression by a man whose movement on the court appears effortless. His shot-making is unlike anything we have ever seen. No player in history has ever had such a complete arsenal of weapons, such a bewildering array of ways to hurt his opponent, and so much raw talent.

Plenty of other players are faster than he is. Just about everyone else on the tour is younger than he is. Most of the younger guys can hit a hell of a lot harder than he can. Several of those young guns are going to be future World No. 1s and Grand Slam champions.

But there will never, ever, ever be another Roger Federer. We will never see a champion like him ever again. We will never again witness the artistry of that kind of shot-play, admire the balletic grace of that sort of foot movement, feel our jaws drop at the sublime virtuosity of the winners generated with that manner of effortless grace from every part of the court.

The King of Kings once again reigns supreme and triumphant. One day, he will leave us to retire to his family and raise his children, and on that day the beautiful game that tennis can be will lose the man who has elevated it to heights that nobody thought possible before he came along.

That will be the saddest day in the history of the sport. It will be a day of mourning around the world for the millions of fans who love this man. Many of us grew up watching him; many of the young players on the tour idolise him, as they should. All of us who love the game of tennis know that he is something truly special, who has shown us all how amazing the game can be when a true artist plays it.

For now, though, may the days of his reign be long and happy. And may we see him raise his arms in victory and lift high a Grand Slam trophy at least one more time, and hopefully a lot more than that, before he finally calls time on a career that has redefined what is possible for any mortal man.