Seen at a Barnes & Noble bookstore about 15 miles outside of San Antonio today: 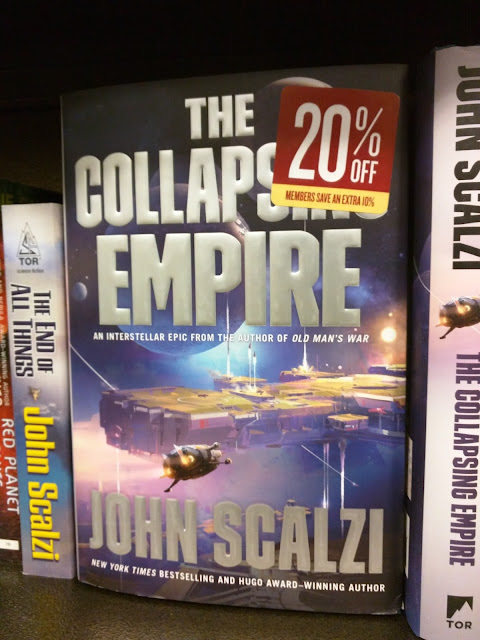 And this, let it be noted, is Tor Books' most heavily hyped and promoted sci-fi author, in whom they have invested quite a serious chunk of change. The book just came out earlier this month, and already it's being marked 20% off.

Now, I will be the first to admit that I am not familiar with marketing in the book industry. It isn't what I do.

It could very well be that standard industry practice is to take a book that a publisher has invested in very heavily, and has insisted on charging a considerable price for (given that this is a hardcover edition,  it's being sold at $25 list price, which is REALLY damned expensive), and then mark it down heavily.

Now, again, I could very well be completely clueless about how marketing works in the publishing industry. I'm perfectly happy to be corrected if I am wrong here. But it seems to me that, if one's product is supposed to be the very best that the industry has to offer, and one's publisher has spent a very large sum of money promoting one's work, then one's output should be quite literally flying off the shelves without any need to resort to discounts, no matter how steep.

After all, if a product is really that good, people will pay good money to buy it.

Except, of course, the product is DREADFUL.

I have no intention of reading the Chief Gamma-Rabbit's work, now or ever. If I want to read something like Starship Troopers, I'll bloody well read the original. Or I'll read Tom Kratman's work- because he respects the source material, possibly even more than I do, and doesn't rip it off but instead simply pays homage to it instead, in his own inimitable way.

If I want to read something like the Foundation series, again, I am perfectly happy to read the original. I don't need to read a tenth-rate ripoff of it.

And if I want to read a parody of a ripoff, that actually turns out to be in some ways even better than the original source material that inspired the ripoff in the first place, then I'll go read The Corroding Empire Corrosion (The Corroding Empire, Book 1) by Johan Kalsi Harry Seldon.

In fact, I finished it last night. And I have to say, I was really impressed.

Overall, it is not quite as good as the original Foundation. But it does have its brilliant moments, and as I said, in some spots, it's actually better. It just doesn't sustain that brilliance throughout the book.

But then, that is to be expected. The author wrote it as a sort of in-joke within Castalia House. It wasn't supposed to be a truly serious full-bore heavy-duty novel. And yet, it stomped all over the laughable attempt by John Scalzi to write a good sci-fi novel.

At this rate, Tor and Scalzi won't need our help. They're making prize purple idiots out of themselves with only minimal effort on our part.

If this is the best that they can do, then I don't think it is premature to start writing obituaries for John Scalzi's career and for Tor Books- or at least, for the career of Patrick Nielsen Hayden, the man behind the naked Gamma who has now achieved the dubious distinction of making himself a laughingstock in spite of his very best efforts.