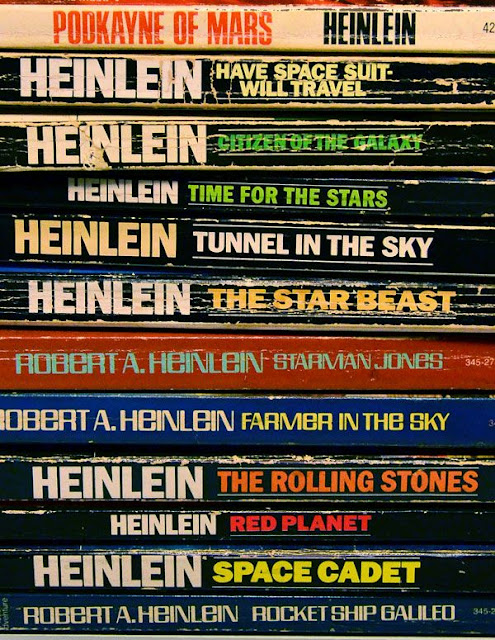 I recently finished the twelfth, and last, of Robert A. Heinlein's famous "juvenile" novels, published when the late Grandmaster of science-fiction was approaching, but not quite yet at, the very peak of his immense literary powers. Now I am, of course, a huge Heinlein fanboy; I have been singing the praises of Starship Troopers, my candidate for the greatest military science-fiction novel of all time, for several years, and I've read through several of his greatest works (including the flawed but still superb Stranger in a Strange Land) and been hugely impressed.

However, in order to appreciate just how good, and how versatile, the legendary Mr. Heinlein was, you really have to read through his earlier works, written for a very different audience than his later adult-oriented novels. The investment of time and effort required is amply repaid.

The word "timeless" does not apply to very many works of science fiction, if we are honest. Most sci-fi from the 1950s, 1960s, and 1970s is horribly dated today; certain works that were considered to be of surpassing brilliance at the time of publication look awkward and ridiculously anachronistic today. I am reminded in particular of some of the concepts posed within Isaac Asimov's Foundation series, which come across as more than a little absurd given what we know now about human nature and historical patterns.

Yet, reading through Heinlein's twelve juvenile novels, one is much struck by the fact that anyone over the age of, say, fifteen, can derive great enjoyment from all of them, even today- and learn a few lessons in the process.

Quite simply, it is because Heinlein had a knack for asking and answering the questions that really mattered.

He didn't waste his time taking ideas that were fashionable in his day and age and extrapolating them into some far-distant future. That was what many of his contemporaries did, and that is why most of them have long since been forgotten, or condemned to having small, aging, and dwindling fan-bases  Instead, he took the immutable realities of the human condition, age-old questions and trials that define what it means to be human, and simply repackaged them in ways that make sense, no matter when or where you read them.

At the core of every juvenile Heinlein novel is a transformation process understood in his very bones by everyone who has ever lived to make the difficult passage from boy to man.

Every one of us men, from the dawn of our race, has faced the same trial: the transition from youth to manhood. The exact nature of that test takes on as many different forms as there are tribes and cultures in this world, but the basic goal remains always and everywhere exactly the same: to push a teenage boy above the parapet of his childhood by forcing him to take on adult responsibilities and challenges.

And whether you are reading Rocket Ship Galileo, Space Cadet, Red Planet, Farmer in the Sky, Between Planets, Starman Jones, or any of the rest of the series, the theme is consistent between every single one of them: take a reasonably mature, highly intelligent, and free-thinking boy about to make that difficult adjustment, subject him to challenge and hardship, and watch as he responds and becomes a man.

That is why Heinlein's juveniles are so important. That is why they have resonated so thoroughly with every boy or man who has read them in all of the years since their publication.

It isn't because the technological predictions involved were particularly accurate. A modern man with an Android phone and a laptop reading through Starman Jones, in particular, would find it nearly impossible to grasp and visualise the incredibly intense warp-node entry scenes depicted in that book, where human navigators have to engage in astonishing degrees of mental gymnastics in order to safely get their ships through the wormholes.

It isn't because the social issues under discussion are all that relevant to our modern day and age. The only one out of the series in which the political environment would be even halfway recognisable to modern eyes would probably be The Star Beast, in which a young boy strives against the best efforts of a paranoid and overbearing government to save his friend and pet- who turns out to be a "princess", of a sort, of a distant and vastly superior alien race.

It certainly isn't because space exploration has become a reality. In virtually every single Heinlein juvenile, intra-Solar travel is a reality, and in several of them, so is interstellar travel. Some of them take the idea of interstellar exploration to dizzying heights, like Starman Jones or Time for the Stars or Tunnel in the Sky, but even the more restrained ones in the series, like The Rolling Stones, consider travel between the planets of the Solar System to be normal and mundane. This plainly has not happened; Mankind long ago abandoned our birthright to the stars in favour of the stupidity of social justice and feelz right here on Earth.

None of these things explain why you and I can read the juveniles as fully matured adults and still gain value and enjoyment from them.

No, the reason is far simpler than any of these things: it is because the core ideas and ideals are timeless.

Heinlein had that rare ability, so precious among great storytellers, to take the most fundamental and primaeval themes in Mankind's history and turn them into great stories. These themes are eternal, relevant everywhere and in every culture.

They speak of Man's struggle to forge civilisation out of savagery; of his desire to be free to live his life as he pleases, and to aggressively defend those that he loves with force, if necessary; of his fundamental desire and need to form lasting bonds with fellow humans who value him as much as he values them; and of his responsibilities toward his fellow men, to uphold the shared ideals and virtues that his tribe has come to call their own.

You see these themes over and over and over again in every single one of the juvenile novels. Some of them focus clearly on one or two of these themes, like Tunnel in the Sky. Some pick up on multiple themes and ideas, and perhaps lose focus a bit because of it- I'm thinking here of Have Space Suit, Will Travel and Citizen of the Galaxy, two of the "weaker" juveniles in my opinion.

As for which one is my favourite book of the series? That actually is not an easy question, because so many of these 12 books are so well done. But, if I had a gun to my head and was forced to choose, it would probably be Starman Jones, followed closely by The Rolling Stones and perhaps then by Tunnel in the Sky. And that is because each of these three books does such a great job of taking these primal, fundamental themes of the human condition and turning them into phenomenal stories of life at the very edge of Man's capacity for survival.

But all of them focus on broad, timeless themes and messages that are always and everywhere relevant to all young men.

Which leads me straight to what was supposed to be the thirteenth juvenile, the one that became the greatest military science-fiction novel ever written.

If you read Starship Troopers- and I re-read it every few months, because it is simply that good- you will immediately realise that everything that I have written above is brought to its fullest and most powerful realisation within that book.

Indeed, in many ways, the "juveniles" were the whetstone upon which Heinlein sharpened his ideas. Reading through Space Cadet, in particular, one can see very clearly the core ideas concerning duty, morality, and individual responsibility that are woven into the very fibres of the pages of Starship Troopers.

At least one eagle-eyed reader of this blog has left a comment to the effect that Space Cadet was, basically, a prototype for Starship Troopers. And he was, and is, correct.

One sees the same thing with some of the themes developed in Red Planet and Farmer in the Sky and, in particular, Starman Jones: a boy, raw and untested, becomes a man by embracing the terrible but necessary burdens of duty and responsibility, and in so doing, gains the respect, admiration, and love of his peers.

Starship Troopers is, in my personal opinion, the book that every young man needs to read between the ages of 14 and 18. Every boy on the cusp of adulthood needs to understand that, in order to truly be a man, he must accept responsibility for the well-being of others, and must strive to be both stern and compassionate, obedient and free-minded, idealistic yet pragmatic, and willing if necessary to spend (not waste) his life so that his people might live and prosper.

But the monumental achievement in literature and civic philosophy that is Starship Troopers may never have come about if Robert A. Heinlein had not spent nearly 11 years honing his ideas on supposedly "lesser" fare.

So if you are a parent, looking to get your son interested in reading again, or if you are simply keen on picking up some great sci-fi to keep yourself occupied, you would be hard-pressed to find anything better worth your time than the "juvenile" works of the Grandmaster of Science Fiction. As we now know, there is nothing childish about them- and the timeless quality of their ideas will resonate with you, just as it did with me, and with countless other readers before me.
Email Post
Labels: books masculinity philosophy sci-fi