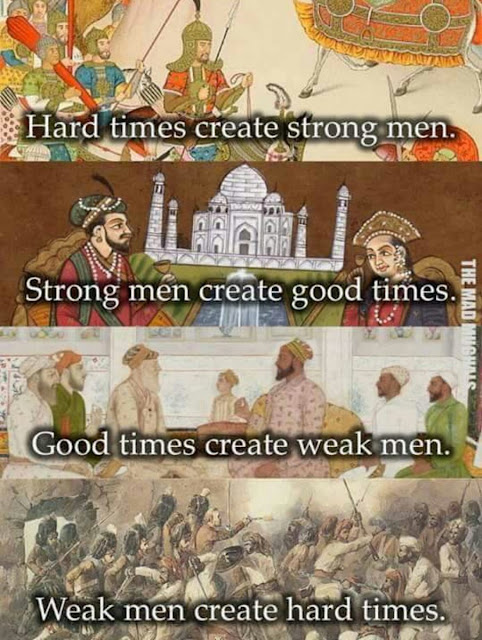 If you've been reading the works of people like me for any significant length of time, bemoaning as we do the very real threat of the collapse of Western civilisation, you will almost surely be familiar with the term, "Demographic Winter".

The basic idea behind the term is quite simple: in a world of rapidly declining and in many cases terminally low birth rates, the economy simply begins to run out of warm bodies to keep it going, and the result is a nationwide, region-wide, and possibly even worldwide "economic winter".

Here are a bunch of beardies, boffins, and assorted other clever people to help explain it a little better (and at considerably greater length):


There are several key points brought up in that long video, but three most important are these:

1. A Unique Time in History

In previous eras, going all the way back to the dawn of human civilisation, never before have we seen rising economic prosperity combined with declining populations. It just didn't happen. Prosperity and population growth simply went together like peas in a pod: greater material wealth meant that more mouths could be fed, and more babies could be born, and more harvests could be reaped and more trade could occur, and so on.

If a nation were unlucky enough to face the spectre of war, it was often- not always, mind you, but often- the more populous nation that won, simply by virtue of sheer force of numbers, with the very important caveat that both antagonists were approximately equal in terms of technology.

This has been (mostly) true, with very few exceptions, for as long as you care to look back through recorded history.

So what changed all of a sudden?

The answer is that humanity became vastly more productive in the last 200 years.

That is the direct result of three seismic upheavals in technology, industry, and agriculture. The first was the Industrial Revolution, which for pretty much the first time ever made it possible for humanity to escape the infamous "Malthusian trap", wherein food resources increased arithmetically but human populations increased geometrically.

The second was Norman Borlaug's "Green Revolution", which made it possible for humanity to support far more humans using far less arable land due to greatly increased crop yields. The gifts of bioengineering and Mendellian genetics created rust-resistant strains of wheat and highly robust strains of corn and rice, doubling and in some cases even tripling crop yields almost overnight in countries that had once walked the knife-edge of starvation year in and year out.

The third and most recent was the Digital Revolution, which has of course forever transformed the way we work, play, and live. That is what makes it possible for you to read these words and watch that video. It is what gives all of us material comforts far beyond anything seen in the most fevered dreams of our ancestors.

All of this means that Mankind can achieve far more than ever before with far fewer humans than might otherwise have been required to achieve these standards of living.

It would appear, in the West at least, that we have achieved all of the material comfort that any advanced society could possibly want. Which leads us on to the second major point:

It is true that Mankind has achieved unimaginable material prosperity and economic comfort. Yet for all of that, our entire way of life still depends on people. Nothing can or will change that anytime soon.

We still need farmers to grow our crops and craftsmen and engineers to build things- we just need far fewer of them than we used to. We still need programmers to create and maintain and enhance our digital infrastructure- but we don't need everyone to be a programmer, the way we needed most people to be serfs and peasants to maintain a feudal economy back in the day. We still need scientists and biochemists to come up with new ways of growing food and feeding the world- but these are now highly specialised occupations requiring intense training and years if not decades of dedication.

We still need warriors willing and able to defend us from each other- but there are fewer and fewer of us willing to put our lives at risk.

As it turns out, if you give people everything that they need to live, it seems that they will do everything possible to prolong their own lives- but will not be terribly concerned about whether the society that gave them these things will live beyond them.

If you look at a stable society- one that is not growing, nor dying, but is merely static in terms of numbers and is merely interested in maintaining its current standard of living, as Western and Japanese society seems intent on doing- then you will see that there will be about 2.1 children born per woman.

That is all that you need in order to stay in "maintenance mode": one son to replace the man who spawned him, one daughter to replace the woman who gave birth to her (and in turn produce the one son and daughter required to maintain a static society), and 0.1 children of either sex which are, in coldly Darwinian terms, completely disposable.

Now here's an important question: what happens when a completely static society runs into a civilisation that isn't interested in stasis, but is instead growing?

Such is the conundrum faced by Western civilisation today. Its nations are shrinking and dying. The white race that created this incredibly advanced, sophisticated, and immensely prosperous civilisation has apparently largely lost interest in maintaining its own power and position.

Yet Western civilisation finds itself locked in a contest against multiple other civilisations that want pretty much the same real estate, the same resources, and the same prestige and glory.

As Robert A. Heinlein pointed out in Starship Troopers, any society that fails to breed and fails to defend its territory will find itself simply shouldered aside by more virile, more energetic, and just plain more interested groups that have not forgotten what it means to live for a future.

And it's not like the West's rivals are immune to the same problems, by the way. Eastern civilisation faces the same population crisis that the West does, but on a vastly greater scale. As Mark Steyn pointed out at some point in the past, right now China has about 700 million very poor people. In about forty years, China will have about 400 million very old poor people- and its population isn't growing nearly fast enough to offset the massive impact this will have upon their economy.

Japan is facing a halving of its population. Russia, until about ten years ago, was facing the same. Parts of Eastern Europe have already experienced this hollowing-out.

Even the demographically fertile lands of the Arab and Persian Islamic realms are facing their own (very poorly publicised) population crises. Even the Arabs have stopped breeding like rabbits- at least, relative to the way they used to.

But it is the West that has the biggest problem right now- because of all of those civilisations it is the strongest, the richest, the most powerful, and, let's face facts, the whitest.

That is right: white people are basically not breeding, and in so doing are allowing themselves to be bred right out of existence.

Why, exactly, would an entire society condemn itself to stagnation and decay and eventual destruction?


The Death-Spiral of the West

The problem that Western civilisation faces, and we might as well call it white civilisation because white people did very largely create what we call "the West", is quite simply that there are fewer white people around every year to maintain what their forefathers built.

Birth rates across the developed world are in the tank- this has been known for years. Just how bad the problem is, though, takes seeing to believe: 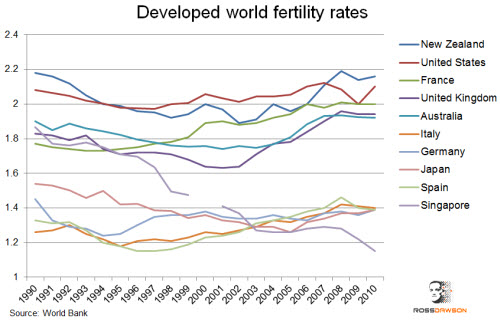 And even that doesn't quite tell the full story. To see that, you have to go back farther in time than 1990. Here, using the same World Bank dataset, is developed Europe's fertility rate dating back to the tail end of the Baby Boomer generation: 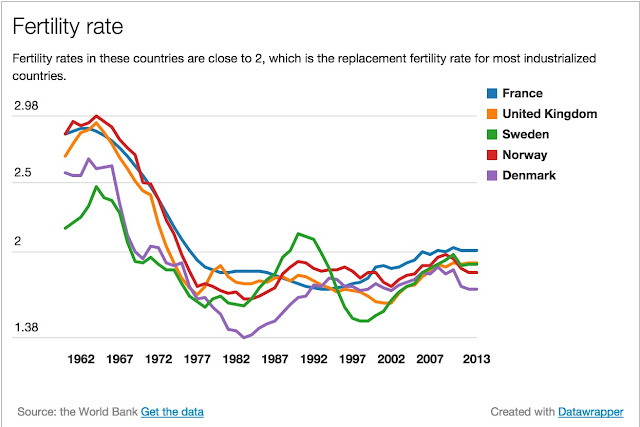 Now, fertility statistics are all very well and good, but there is one statistic that is more important than all of the rest:

That, based on historical evidence, is what we might call the "event horizon of birth rates". We might as well call it that because no civilisation in recorded history has ever survived a birth rate lower than this number.

Think about that for a moment, and you will realise what an appalling future awaits most of Eastern Europe and the southern Mediterranean nations. They are not merely aging, they are doomed.

So that is the problem: the West is doomed unless it starts breeding again. And given that the current Millennial generation is evidently having less sex than any generation before it, getting married later, having children later, and having far fewer children (if any) than our ancestors, the picture is bleak, to say the least.

This begs the question: what did civilisations in the past do to stave off impending doom?

Some, like imperial Rome, imported barbarians from the East and North to replace the native citizens who refused to reproduce. Most of you who read my work probably know how that worked out for them.

Another alternative comes to us from those wonderfully mad Spartans. Legend says that when the Spartans realised that they were losing too many men in one of their wars- my recollection of this story is imperfect, but I think it was the Athenians- the kings and the ephors decided to bring the youngest and most virile of those men home from the front lines for a very pleasurable duty.

Their mission, should they choose to accept it- and why wouldn't they- was to come back to Lakonia and impregnate the most nubile young women of the land, so that a new generation of Spartan citizen-soldiers could be raised.

That is one way to solve the problem. I rather doubt it would fly in the current political and sociological climate, but one cannot deny that it would be pretty damned effective.

There is, in all of the gloom and doom, one piece of good news: religious folks apparently have not lost the desire to "go forth and multiply".

As David P. Goldman pointed out in his rather good book on the subject of civilisational collapse, Orthodox Jews, traditional and evangelical Christians, and (unfortunately) devout Muslims all enjoy much higher birth rates than their secular counterparts.

And the data tell us that the future will belong to much more traditionalist, more conservative, more K-selected types than are currently in charge.

That is not necessarily a bad thing if you think like we do. The problem is that the transition from where we are right now, with an aging population that is increasingly parasitical upon a shrinking base of caretakers and producers, will necessarily be filled with extreme hardship and considerable chaos.

Those, then, are the inescapable facts of our current predicament. What, then, is a self-aware man to do about this situation? Well, that is for Pt 2, if and when I get around to writing it.
Email Post
Labels: altRight demotivationals economics human stupidity liberal stupidity philosophy