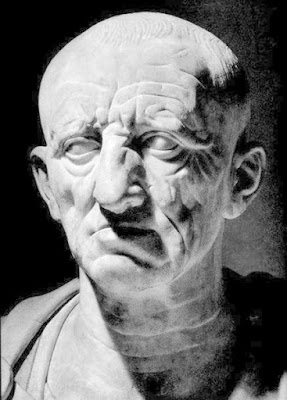 The Wisdom of the Elder

Cato the Elder was and is remembered as one of the greatest of the "old Romans". He embodied all of the great virtues of the early Roman Republic. He was stern, patrician, conservative in manner, ascetic in lifestyle. Whether he was working his farms or fighting in battle, he lived as his men did, sharing their food, working directly with his hands, eschewing finery and indulgence of any kind.

His personal integrity was unquestionable; his public and private conduct, unimpeachable. He was the living embodiment of the ancient Sabine virtues that were dying out in the face of the increasing decadence of the Roman Republic by the 3rd Century BC.

He is, rightly, remembered as one of the last of the Old Romans.

A particular aspect of his character lay in his absolute loyalty to Rome's unique system of republican, patrician government- and his equally severe hatred of the ruling oligarchies of Rome's great ancient rival, Carthage. In his own experiences in combat with Carthaginian forces during the Second Punic War, he came to understand that Rome faced a mortal enemy whose values and ambitions stood in direct opposition to those of his beloved Republic.

And so, during his time in the Senate, regardless of what subject he was speaking upon- whether it be taxes, education, public welfare, military strategy, or foreign policy- he often ended his powerful speeches with a simple phrase:

This has been passed down to us today in its simplest and purest form:

"Carthage must be destroyed"

As we look forward into the New Year, we must also heed the lessons of the past and apply them with care. And as 2015 has made clear, there is no longer any choice in the war for our culture.

Quite simply, it's us, or the SJWs. Those are the choices, and it is time to pick your side.

There are many parallels between what we face today and what the Roman Republic faced in the Punic Wars. In both cases, two mortal enemies faced each other in a very clear winner-takes-all fight. The prize in Rome's case was total economic and political dominance over southern Europe, northern Africa, and much of the Levant, but in our case, the prize is if anything even greater and more important: our culture, our values, our way of life.

Like us, Rome had faced a long and terrible string of setbacks and defeats- Trebia, Trasimene, Ager Falernus, Cannae- before finally marshaling all of its resources and pouring all of its energy to the singular task of defeating, and then destroying, its enemy.

And like us, when Rome's full wrath was unleashed, it was truly terrifying to behold- but it took a long time, and a lot of provocation, before that happened.

There are differences too, however. We cannot fight this war for our culture through top-down, command-and-control methods. These will fail, routinely and totally. We cannot lose the moral level of war- the most powerful, the most important, and the one that our enemies have been superbly talented at taking in the past.

Above all, we cannot initiate physical violence, under any circumstances, because this immediately loses the moral level of war for us. At the same time, if we are physically attacked by SJWs, the doctrine of "proportionality" does not hold. They will do everything in their power to destroy us- but they did not count on us being more than willing to return the favour.

And it must be remembered that their power lies in numbers. In reality, they are cowards- as has been proven repeatedly in a number of different skirmishes and battles throughout the last eighteen months. When faced with a real, concerted, and determined opposition, the SJWs simply fall apart- they are psychologically incapable of dealing with the stress of an actual threat.

We, on the other hand, thrive on competition and engagement. And so we must learn carefully the lessons of the two most successful anti-SJW campaigns of 2015, for they will serve us very well indeed.

What makes #Gamergate so special, and such a wonderful movement, is that it was the first successful large-scale attempt to take the fight directly to the SJWs, on their chosen ground. We beat them there, badly, and we continue to beat them. But it's worth asking how and why.

Consider how an SJW-led attack used to work before #Gamergate. Vox Day laid out the exact sequence of steps in his book on the subject. They find a target, preferably an individual with a lot to lose. They latch on to some transgression made by that target, whether real or imagined (usually the latter). They blow it out of all proportion. They point and shriek, they isolate and swarm, they disqualify with all of their might. They demand an apology as the price of peace- but then, when the apology is actually made, they use it to browbeat the victim and destroy his or its reputation for good. And finally, they mount a victory parade for good measure.

It becomes immediately obvious how this works the moment you start looking at this conflict through the paradigm of generational warfare. SJW tactics are, basically, 2nd-Generation Warfare in action. They are able to do this because they have access to the media equivalent of "massed firepower"- the mainstream media.

It is no secret that the media is our enemy in this war. It is the facilitator and supporter of the SJW disease. And there is no doubt that the SJWs do control this vitally important strategic asset within the culture war. They use its influence to first squeeze out any possibility of dissent from the agreed-upon line, and then to capture the moral level of war by pretending that they are defending freedom and justice- when in reality they are perverting those very same things.

#Gamergate's success lies in the fact that it started as a direct reaction to massive, endemic, and absolutely evident corruption within gaming journalism. We reacted to that corruption by demanding structural reform within the gaming media. They responded by shrieking about "sexism" and "racism" and "homophobia"- the old SJW fall-backs. The SJWs used the same tactics that they have used before on individuals and corporations- single, weak, centralised, fragile targets. But this time, to their utter horror, they couldn't craft the narrative to suit their ends.

Every time they called us racists, we showed that we were racially and politically diverse, and they were almost universally white.

Every time they called us misogynists, we showed that we were made up of both men and women, from across the political spectrum, who simply wanted to be left the hell ALONE to play the games that we want to play.

Every time they called us homophobic, all we needed to do was let Nero, and his epic hairdo, loose on them. (I'm not gonna lie, I disagree with the man's lifestyle choices, but he is a phenomenal asset. He is literally unbeatable in any debate with an SJW. And in this war, anyone firing at the enemy and not us is a valuable ally, so as far as I'm concerned, he is our brother.)

Every time they tried to find a single target to destroy, another ten or more would attack them from a completely unexpected and different direction. Operation Disrespectful Nod showed us exactly how to attack and destroy their equivalent of supply lines- the vitally important sources of funding and sponsorship that keep them alive. We do not depend on these sources, but they do.

We were able to become formless, decentralised, and nimble; they were fighting their side of the war with information that was a day or more old, and in the age of social media, that's about as useful as reading up on Cyrus the Great when you're being attacked by German Sturmtruppen on one front and panzer divisions on another.

In other words, we are fighting using 4th-Generation Warfare tactics against an enemy still stuck in 2nd-Generation mode.

Attack of the Puppies

If #Gamergate provided the template and early successes, it was the Puppies campaign for the Hugo Awards that proved conclusively what the conditions for victory are.

The SFWA and the Torlocks had long dominated the Hugo and John W. Campbell awards for (supposedly) the "best" sci-fi and fantasy works released each year. For the past twenty years, a long stream of mediocre works, authors, and editors had received plaudits that, frankly, they did not deserve.

Previous attempts by good and decent men and women like Larry Correia, Brad Torgersen, and Sarah Hoyt to reintroduce at least some actually good sci-fi works into the Hugo Awards process were shot down, in flames. This was predictable, but unfortunate nonetheless. Both men decided to keep trying to change the system from within; I sincerely wish them all the best with their efforts, they are profoundly worthy allies and as such are our blood brothers.

The problem is, they are good men trying to change an evil system. And evil cannot be "changed". It can only be destroyed.

In 2015, though, Vox Day dropped any and all pretence at civility and put forth the Rabid Puppies, a slate of nominees designed specifically to give the SJWs aneurysms, heart attacks, and explosive diarrhoea- simultaneously. I'm delighted to say that it succeeded brilliantly at doing precisely that.

And when time came to vote, well, we actively helped the SJWs nuke their own awards. Saints alive, but that was fun.

The SJWs reacted, grumpily, by arguing that we were pissed off because none of our crappy works won awards. Naturally, they completely missed the point.

We know the Hugo Awards are beyond saving. Our interest does not lie in rejuvenating the Hugo Awards. One could say that our basic plan of action involves nuking them, blasting the strike zone with a space-launched KEW, and then burning a giant laughing wolf's head into the ground using a Solar-powered laser array for good measure.

The Hugo Awards showed exactly how we can win the war for our culture. It turns out that, when confronted by an even halfway-effective and coordinated yet decentralised opposition, the SJWs have absolutely no ability to stand and fight, and the Hugo Awards proved this beyond any shadow of doubt.

These two examples demonstrate that we can win this war. We have fought on a number of different fronts against their attempts to take over the culture and impose rigid uniformity of thought and action. They failed to achieve that objective.

However, they are not gone, and they are not forgiving. It will take a very great deal more to remove the taint of Social Justice ideology from our books, movies, television, schools, workplaces, and homes. This will not be an easy fight; I don't even expect it to be won in my lifetime, which considering how young I am, should be profoundly depressing.

Yet I'm actually very optimistic. Having proven that we can fight and win on their ground and on their terms, we have nothing to lose and everything to gain.

The war, unfortunately, is not over. It hasn't even fairly begun. We have won and continue to win important victories in gaming and sci-fi literature. But our culture is still infested with SJWs. They must be rooted out and destroyed. At this point, it's literally us or them. We know how they operate, and we know they will stop at nothing to wipe us out. It's well past time we returned the favour.
Email Post
Labels: 4GW culture wars liberal stupidity philosophy rabbitology scalzied