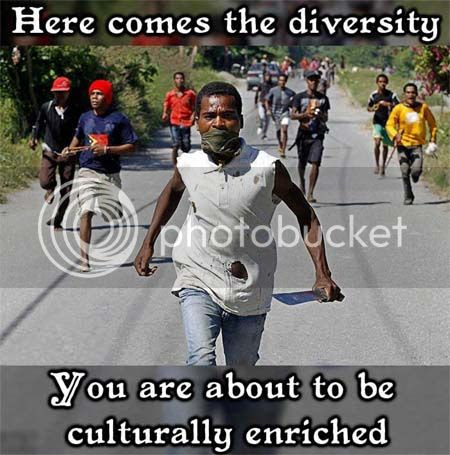 I was in the gym on Tuesday when I saw a story flash on CNN that a young Australian bloke had been shot and left to die by the side of the road in Oklahoma. My first, instinctive reaction was, "I'll bet he was shot by blacks". This reaction was confirmed when the story had finished playing and CNN had made no mention whatsoever of the ethnicity and race of the perpetrators of the incident- despite making it very clear that the police had suspects in custody and the suspects themselves claimed they shot the guy because they were "bored".

It's a sign of just how badly multiculturalism has failed when a foreigner in this country, of mixed race and ethnicity, can figure out what the mainstream media seems too afraid to understand: diversity beyond a certain point is downright dangerous. When it became clear that there were three perpetrators, and two of them were black and one white, the entire MSM story began to fall apart very quickly indeed.

Now it turns out that the police are refusing to recognise the evidence that is literally right in front of them, stating that a crime in which non-white criminals shot a white guy who had done nothing whatsoever to them did not commit their crime for racial reasons:

Inflammatory, race-based comments on Twitter by the youngest accused, 15-year-old James "Bug" Edwards, before last week's drive-by murder in the city of Duncan led to speculation Mr Lane, 22 from Melbourne, was targeted because of his race.

In one Twitter post Edwards wrote: "90% of white ppl are nasty. #HATE THEM".
In another post Edwards, a champion junior wrestler who hoped to represent the US at the Olympics, claimed to have knocked five white people out after July's controversial acquittal in Florida of neighbourhood watch co-ordinator George Zimmerman for the second-degree murder of 17-year-old Trayvon Martin.
Advertisement
"Ayeee I knocced out 5 woods since Zimmerman court!:)," Edwards, using the derogatory word "woods" to describe whites, posted.

Stephens County District Attorney Jason Hicks said there was not enough evidence collected so far in the investigation to indicate Mr Lane's killing was motivated by race.

"At this point, the evidence does not support the theory that Christopher Lane was targeted based upon his race or nationality," Mr Hicks said in a statement.

"The evidence is insufficient to establish that race was the primary motive in the murder of Christopher Lane."

The only way that any rational man could come to this conclusion, based on all of the evidence before him, would be by lobotomising himself with a rusty spoon.

It is an observable, historical fact that civilisations which embrace too much diversity decay from within- think the ancient Romans, the modern British, and Sri Lanka for the past 40 years. Diversity works only as long as the dominant, civilising power maintains its dominance. This can only happen as long as the influx of other cultures is kept to a steady, minimal flow. The moment it becomes an uncontrolled flood, the dominant civilisation begins to wither under the sustained assault of uncivilised and half-civilised barbarians. The process of civilising barbarians takes a very long time- Vox has noted that based on how long it took Germanic tribes to shed their barbarian habits and become civilised, the process takes the better part of a millennium- and one cannot simply short-circuit it by imposing the stupidity of white-hating multiculturalism upon people.

My guess is that after the Zimmerman trial and the resulting spectacular failure of the prosecution to convince a jury that a Hispanic man had committed a serious racially motivated crime, the people who run this rapidly-declining superpower are absolutely terrified of pinning the blame on blacks. They are terrified of the civilisation-shattering consequences of what they have done by letting blacks off the hook for their own actions, and they know that the deep and latent hostility that many- I would argue most- blacks feel towards whites and other races has the potential to express itself in the most horrific ways imaginable.

I am aware that much if not most of what I am writing will be construed as deeply racist. I can't say I care. I'd like to see a potential critic assail the observable facts and logic of the matter. I would probably fall off my chair laughing if someone accused me of being racist, given that I am of mixed race (and caste) myself, have lived in 6 different countries, and count among my closest friends a white guy from upstate NY, an Italian woman, a British Indian, a Geordie, a vegetarian South Indian, a Chinese guy from Hong Kong, and a Chinese woman from Singapore. I am simply not impressed by accusations of racism any more- and I suspect most people of my age group who have actually lived outside of a liberal bubble for most of their working lives aren't either. When a group of people becomes offended at quite literally anything and everything that it sees, its opinions rapidly become worthless to anyone with a working brain.

Joining hands and singing kumbaya around a fire with your little brown and black brothers and sisters does not change the fact that blacks in this country are observably of lower mean IQ and are vastly more dangerous both to each other and to non-blacks than whites, Hispanics, and Asians. John Derbyshire's "talk" is no longer just common sense written down in an easily accessible format; it is now absolutely mandatory information for any sensible parent to give his or her child.