The geekwebz have been blowing up with howls of outrage from gamers infuriated by the SocJus bullshit that appears to have infested the upcoming so-called "blockbuster" release, The Last of Us 2. Everyone who has played the original game - and quite a few people who didn't but just like to be outraged in general - has weighed in on the subject.

We'll start with Lord Razorfist, simply because he's the funniest and best at presenting the material:


But if you want to know what the hell is actually going on, then you can only do that by turning to everyone's favourite drunken Glaswegian:

And for a somewhat more... well, American take on things, here's Gary Buechler from Nerdrotic to explain it all:

Now, I haven't played The Last of Us. I'm an Xbox guy, because HALO, that's why, and I never did bother getting a PlayStation of any generation. So I'm not at all hot and bothered about another mega-title belly-flopping harder than a walrus diving off a cliff.

What does interest me is the nature of one Anita Sarkeesian's involvement in the whole debacle.

Ms Sarkeesian has been actively helping to destroy the video games industry for years. Longtime Readers, or those with long memories at least, might recall that back between 2014 and 2015, I wrote articles for Roosh's sadly defunct gaming website, Reaxxion. Several of the writers for that site devoted considerable amounts of their time to investigating and uncovering her pernicious influence upon games, gaming culture, and the manner in which she helped spread the extreme corruption of the gaming media.

She continues to spread the vile tendrils of that corruption throughout the industry, and it is clear that no gaming studio is safe from her unless they actively shut her, and her acolytes, out as fast as possible.

It may well take the hard flop of yet another supposedly gold-plated sure-fire winner to accomplish just that.

And that is a Very Good Thing.

These games absolutely need to die out. Games that insist on ramming home a bunch of right-on preachy bullshit about queer and trans acceptance belong in only one place: the garbage bin. These games preach literal falsehoods as gospel truths, and insist on labeling good as evil and vice versa. They are, quite simply, Satanic, and deserve to be treated as such.

I do not spare my own beloved HALOverse from this judgement either, by the way. It seems unlikely at this point, but if 343 Industries does something as stupid as injecting a bunch of social justice bullshit about trans and gay acceptance into the HALO series, I will happily walk away from it - the same way that I walked away from STAR WARS and other fictional universes. Tremendous damage to the integrity of that universe has already been done through the additions of untold numbers of overpowered female characters in MJOLNIR body armour, far beyond the original scale and scope of the Bungie stories and plots.

The hard reality of gaming is that it is primarily a male province. It is predominantly men who like to play video games similar to The Last of Us - whether they be survival/horror games in the Resident Evil cast, or straight-up hardcore run-and-gun shooters like HALO, DOOM, Gears of War, and the like, or fantasy RPGs.

And let's not forget the hilariously over-the-top large-breasted women of game series like Soul Calibur, Dead or Alive, and others: 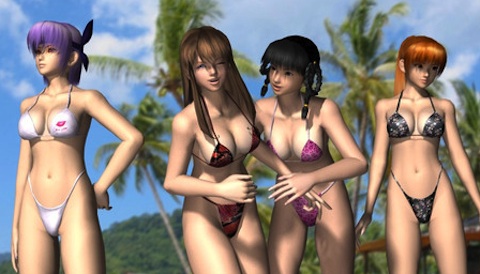 We play those games because they represent a fantastical escape from daily reality. And that is no bad thing.

The problem is that far too many Gamma and Omega males play video games - for precisely the reason I just explicated. And because those men are starved of female attention - mostly, though not entirely, by their own doing - they jump for joy whenever a woman shows even the slightest interest in participating in their favourite activities.

This is a huge mistake. Women in gaming do not help matters at all. Instead, they inevitably invade male spaces and take over them.

So it was with Anita Sarkeesian. The woman should never have been permitted entry into any video game studio of any kind. And now her corrupting influence has helped destroy a major video game franchise - again.

It appears as though industry analysts and managers are beginning to notice. The amount of social justice bullshit that we've been seeing in games has declined markedly since GamerGate exploded onto the public consciousness in 2015 - and I'm proud to state that I was, and am, part of that movement.

But now it would appear as though Sony and Naughty Dog want to spark GamerGate 2.0. Their extremely heavy-handed reactions to the leaks, and their attempts to destroy channels and outlets through copyright claims and other such nonsense, have infuriated their fans and ensured that when the game finally is released, it will likely be a massive flop.

I say: so much the better.

It cannot be repeated often enough: games full of SocJus bullshit need to be tossed into a pile of trash and burned. And that, it appears, is precisely what will happen to The Last of Us 2.

Meanwhile, the lesson for the rest of us is very clear. Never, ever, EVER allow a feminist or social justice warrior into your spaces, your companies, or your organisations. You will regret it and it will cost you an enormous amount of time, money, and energy to sort out the mistakes.

Those are the kinds of situations where an ounce of prevention is worth a ton of cure - which will be found under ten tons of manure.