Back when he was a mere candidate for the highest office in the land, a certain real-estate billionaire developer appeared on a certain hack comedian's certainly lousy late-night program, in which the hack comedian asked the billionaire to read out a children's book that said comedian had written up for him:

We all know how that turned out eventually. The hack comedian became ever more of a hack, pandering to an ever more left-wing audience as moderates and conservatives simply switched him off and tuned him out, and presided over an absolute disaster of an Academy Awards ceremony in 2020 where the ratings simply cratered.

The billionaire, on the other hand, went on to prove that winners absolutely are not losers.

He is now known to us as His Most Illustrious, Noble, August, Benevolent, and Legendary Celestial Majesty, the God-Emperor of Mankind, Donaldus Triumphus Magnus Astra, the First of His Name.

This is the book that he supposedly wrote, and here he is reading it to his granddaughter with a giant shit-eating grin on his face: 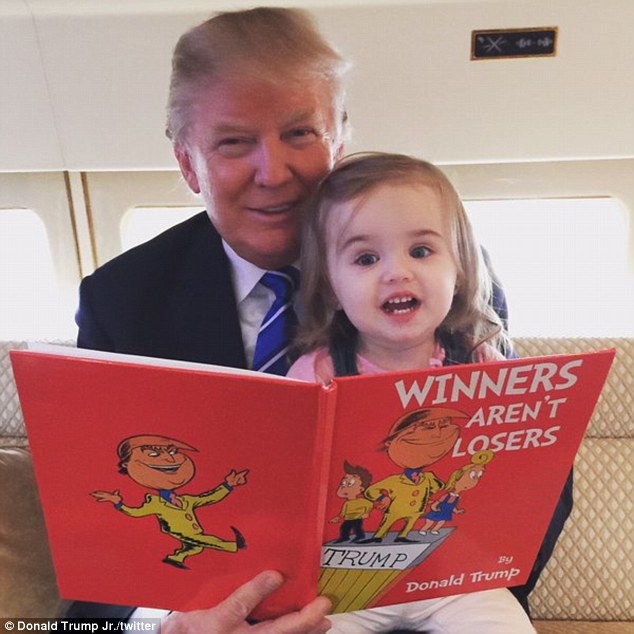 I bring all of this up because of the recent news that Crazy Commie Jew Bernie Sanders got his ass handed to him by Creepy Uncle Joe in Michigan.

It is increasingly clear that Bernie Sanders is basically an angry bitter conflict-avoidant Gamma male. He doesn't know how to get into or finish a fight, and as such, his only appeal is to people who like free shit.

There is no getting around this fact, and as usual, #BasedTucker has it right in analysing Bernie Sanders as nothing much more than a limp-wristed milquetoast who couldn't hold a candle to real revolutionaries:

It gets considerably worse when you actually look at Cranky Bernie's record:

Mao and Che lived through years of deprivation in service to the revolution. Bernie doesn’t even have the stones to live through a couple of bad news cycles to warn people about Biden’s obvious mental decline.

Ho Chi Minh gave up a comfortable life to live in jungle caves. Bernie isn’t even demanding Joe Biden be required to stand up during their next debate.

What a loser this guy is.

But what should we expect from a millionaire Marxist with three homes, including a cushy summer home?

What should we expect from a career politician who spent thirty years doing nothing of importance as a U.S. Senator from a state no bigger than the average parking lot in Texas?

If you poke at a newborn kitten, it will at least try to give you a swat. Not Bernie. Oh, no… the establishment can poke him, rob him, bend him over a table and steal the nomination from him, and all this soft, little limousine Marxist will say is “Joe Biden’s a good man.”

Who does he think he is, Mitt Romney?

Bernie Bros? This is your guy? Really? Was a wet noodle not available? Next time, just run a guy in a Minnie Mouse costume.

Not to belabor the point, but what kind of revolutionary still stands by his comments about Castro and China but plays nice with the DNC?

Bernie’s not dumb. Bernie is plenty tough when he wants to be. So, you know what I think…? I think he’s a grifter, a con man… He talks a good game, and he rakes in the money — all those millions… And in the twilight of his life, he’s enjoying the adulation of big crowds and attention and the spotlight and an opportunity to speak on the national stage… But when it comes to doing something that will make his life uncomfortable, that will separate him from the DNC/Media trough, he just won’t do it.


That is probably about right.

Everything that I have seen of Bernie Sanders indicates that he is what they used to call a "parlour pink" back in the 1950s - a man who talks a good game but won't put his money where his mouth is. In Bernie's case, that is literally true. If Sen. Sanders actually had to implement the crazy shit that he rambles on about for hours, he would personally be on the hook for millions in taxes.

Now, do you honestly believe that someone like Bernie Sanders would willingly give up the kind of cushy lifestyle that he has, along with all of the perks that come with being a United States Senator, simply to please a bunch of Che-worshipping fashionistas who just want free shit?

To ask such a question is to laugh.

Once again it has become clear that those of us who thought that the Daemoncrats would nominate something other than a straight white male for the upcoming battle with the God-Emperor, were wrong.

Actually, we weren't merely wrong, we were SPECTACULARLY wrong.

I do not recall making any firm predictions about who would get the nomination, though that may simply be my advanced old age at play, since I am, after all, officially one of Ye Olde Phartes now that I'm in my mid-thirties. But I did not really expect the gaffetastic Joe Biden to get the nod, simply because I found him so utterly ridiculous, and because the Daemoncratic Party has been largely subsumed by the Hard Left.

But it would appear that Joe "Lyin' Dog-Faced Pony Soldier" Biden - Mr. "You're Full of Shit", Mr. "We're gonna take your AR-14s", Mr. "O'Biden-Bama Democrat" himself - will, in fact, be the Daemoncrat nominee.

Now, let me ask you this:

If you were in the fight of your life, supported by millions of people who have donated their own money to your cause, and you really, truly believe the radical ideas that you espouse, and you were trailing behind an opponent so utterly hopeless and enfeebled and ridiculous that a strong breeze could easily knock him over...

What would you do?

Well, we know now what the God-Emperor did against the Hilldebitch.

He hammered her, over and over and over again, on her corruption, malfeasance, arrogance, and stupidity. He destroyed her public reputation by repeatedly going after her actual record. He fought dirty, because he knew perfectly well that he was in an all-out brawl, a knife-fight to the death.

That's what winners do. THEY WIN. Whatever it takes - they WIN. And they win BIGLY.

Bernie Sanders is not a winner. He's a whiner. He can't even take on a walking gaffe factory, who is the literal embodiment of the stinking, rotten, disgusting corruption of the DC Establishment Swamp, because he thinks that not being nice is a mistake.

It would have been like watching one of those old Mike Tyson fights - the ones before his shock defeat to Buster Douglas, where there would be all this huge hype leading up to the fight, and then you'd get into the arena and try to find your seat just after the starting bell rang, and Iron Mike had already knocked the other guy out.

Now, it could well be that with Joe Biden as the nominee, blacks and Hispanics will gravitate away from Donaldus Triumphus Magnus and back toward someone who is at least somewhat associated with President Lightworker, Barack Hussein Odumbass. But there is also a strong possibility that blacks will take a look at their paycheques and overall economic well-being under the God-Emperor and realise that, in fact, the current Administratum is doing a phenomenal job.

And enough of them might just break out of the racial reservation that they've been on for fifty years, and vote differently.

This will not happen in large numbers. Blacks vote as a racial bloc, and there is no getting past this fact. Nor is it possible to get past the fact that blacks have shown a total inability to maintain any kind of functional civilisation on their own in America.

But it will not take particularly large numbers of black voters to swing an election.

Joe Biden is winning the race to the nomination because he appeals to black voters. In the general election, though, all it takes is a ten to fifteen percentage point swing of black voters away from Daemoncrats and toward the God-Emperor, and that's it. The game is done.

Already it looks as though the Bernie Bros will likely just stay home in November. It's a bit like the dilemma that Republicans faced in 2012 with Mitt Romney. He was an awful candidate who could not defend any of his own ideas and policies and was obsessed with being "nice" and playing to Republican orthodoxy. He went up against an incumbent that he should have won against. But he was just such a bad candidate that millions of Americans who loved their country stayed home and refused to back him. And Odumbass won as a result.

Those same silent majoritarians did not stay silent when the God-Emperor came knocking, because he delivered the first genuinely nationalistic message that they had heard in thirty years. He actually had ideas to sell and made the effort to convince people that he was right. He had, and has, a magnetic charisma and charm about him, a real sense of humour, and the great gift of the ability to touch the common man.

Joe Biden has absolutely NONE of these things, and Bernie Sanders has only a few of them.

This election looks more and more like a YUUUUUGE TRUMPSL!DE - and that is because winners simply are not losers.