Let your yes be yes and your no be no 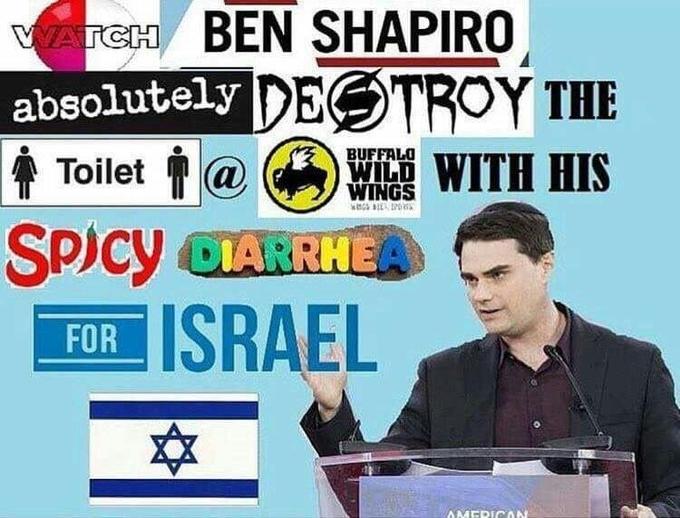 Vernon Thorpe over at The Unz Review shreds Little Benny Shapiru's ongoing bullshitting about "Judaeo-Christian values" with considerable skill and eviscerates The Littlest Chickenhawk's intellectual pretensions with a savagery bordering on the sadistic:

The disputations had arisen after another French Jew, Nicholas Donin, had converted to Catholicism and gone to see Pope Gregory XI in 1238 to warn him of the blasphemies contained in the Talmud and the danger the text posed to a Catholic culture. Among the charges Donin levelled against the Talmud was that it crudely blasphemed Christ and denigrated His mother (Notre Dame) and that it was the basis of a new anti-Christian rabbinic religion which was not the Judaism of the Old Testament, but rather a way of wrenching away the message of those books from their true fulfilment in the New. In so doing, the Talmud it deliberately kept Jews from the light of Christ.

This content of the Talmud was a revelation to most people in Christian Europe at the time. Subsequent scholarship, most recently by Professor Peter Schaefer of Princeton University has largely backed what Donin had to say about the animus and blasphemies contained in the Talmud (primarily but not exclusively the Babylonian Talmud), with the Gospel of St John a particular target of ire. Schaefer and others highlight the extent to which these authoritative texts deliberately slander the holiest elements of the Christian sacred narrative.

More generally, Israel Yuval of the Hebrew University of Jerusalem has done much to establish the conclusion that “The polemic with Christianity that gradually came to dominate the Land of Israel was not conducted openly, but in a convoluted and allusive manner. The Talmuds and midrashim do not explicitly state the name of the rival with whom they are struggling, but the shadow of Christianity nevertheless looms in these rabbinic texts.” Long before these debates, St Jerome was well aware of earlier Jewish interpretations of the Old Testament, which he set out to refute with Christian interpretations, producing an authoritative Latin version of the Bible for the purpose of confuting anti-Christian Jewish accounts.

None of this is even alluded to by Mr Shapiro, who goes on to quote the Talmud approvingly and who in the acknowledgements thanks (alongside John Podhoretz and David French, the man Bill Kristol endorsed for President), his “Talmudic study partner Rabbi Moshe Samuels” (Director of Israel Engagement at Congregation B’nai Jeshurun in New York who “recently served as the Director of Tikkun Olam in Tel Aviv-Jaffa a service-learning Masa program, spearheading the field of Jewish peoplehood and leadership training”).

It’s worth spending some time on this issue, because anyone who talks about ‘Judeo-Christian’ values, let alone makes the term central to his thesis about the decline of the West, needs to be asked some questions. This is not to deny that the term is sometimes used benignly to signify a willingness to work together with those of another Abrahamic faith on genuinely positive social goals. However, use of the term is suggestive of a political agenda which is in some areas far removed from what a well-informed defender of Christendom will see as worthy of support. As Mr Shapiro is continually hailed as an important ‘conservative thinker’, it is worth asking what his version of conservatism omits and what lies behind the terminology he promotes.


Let's be clear about this. The term, "Judaeo-Christian", is pure wizardry. It is a total redefinition of a term that has very clear historical meaning. The original term referred to Jews who converted to Christianity - and was meant as an insult, because Jews who did so were considered arch-traitors to their race and faith.

The term was NEVER intended to mean that Jews and Christians share the same fundamental values. We simply don't.

We do share the commandments of the Lord, our God. But Jews worship a very different God than we Christians do.

Christians regard the two as one and the same - the LORD, Creator of all and Master of the Universe, who sent His most beloved Son down to Earth to die for our sins and to be resurrected so that all may know of the power of the Lord and believe in His promise to defeat evil.

Jews regard the very idea of God having a son to be a total abomination and refuse to have anything to do with the entire concept.

Christians have a duty to protect and assist Jews, because they were, and are, the Lord's chosen people, who were sent forth to deliver His Word and Law to the world.

That is why I warmly welcome Jews to this blog and hold a particular soft spot for both Jews in general and Israeli Jews in particular.

But we should never, ever make the mistake of thinking that Jews believe in the same things that we Christians do. They don't. To pretend otherwise is rank folly and stupidity.

Jews have as much right as anyone else to reject the ministry of Jesus Christ. The Bible has made it clear that the Jews of Christ's time accepted the shedding of Christ's blood as a sin upon themselves and their children. It is not accidental or surprising that Christians have therefore held Jews responsible for the death of the Saviour ever since then.

Little Benny Shapiru outright lies repeatedly and is known for his dissembling, as Mr. Thorpe points out:

Ben Shapiro is a media personality created by a Hollywood producer who has risen rapidly through associations with Breitbart, David Horowitz’s Freedom Centre and the Shillman Foundation, among others. The latter is funded by the “ultra-Zionist” tech mogul Robert Shillman, a board member of the ‘Friends of the Israel Defence Forces’ which in turn bankrolls the likes of Horowitz to spread fear of Islamo-fascism far and wide, and promote military interventions in line with what they perceive to be Israel’s interests, as well as persecuting academics insufficiently respectful of Israeli policy, while claiming to be champions of free-speech. This can coexist with the promotion of ‘conservative’ ideas insofar as these do not conflict with a neoconservative agenda – so quaint ideas like a just-war theory to which more than lip-service must be paid, defence of a confessional state, critiques of usury and contraception etc. tend to be excluded, while opposition to abortion is broadly supported. It is a little difficult to describe the agenda as neoconservative, despite the origins of the term, because Ben Shapiro seems clear that to use the term ‘neoconservative’ at all is to be guilty of an anti-Semitic slur.

One has to admire the skills of publicists in transforming Shapiro into some kind of expert debater, concerned with ‘objective facts’ and valid arguments. Shapiro’s frequent incompetence in simple matters of logic has been well documented but, like other low-level sophists such as Sam Harris and Stefan Molyneux, he is mistaken by his philosophically naïve audiences for a bona fide philosopher whose reasoning is impeccable.

Ben Shapiro is no philosopher. He is an intellectual charlatan, a coward who runs from informed debate with his betters - most notably our beloved and dreaded Supreme Dark Lord (PBUH) - and a bullshit artist whose supposedly vaunted debating skills really amount mostly to dissembling at high speed and running around his opponent's arguments without ever really addressing them. You have to look carefully for this when it happens, but once you see it, there is no mistaking it and you will never be fooled by it again.

He is a creation of Conservatism Inc., an ephemeral creature who cannot stand criticism and resorts to ad hominem insults, name-calling, and Gamma-sperging whenever he is caught out and pinned down by actual hard questioning:

The lesson for all of us is simple: always - always - let your yes be yes, and your no be no. Your life will be vastly simpler if you follow that rule, because you just won't have to lie about anything.

And if you never have to waste that mental energy, you automatically have much more ability to do good things with your life and times.

Let your yes be yes. Let your no be no. Serve God and love Him with all of your heart. The rest will follow easily enough.