The complete vindication of the God-Emperor 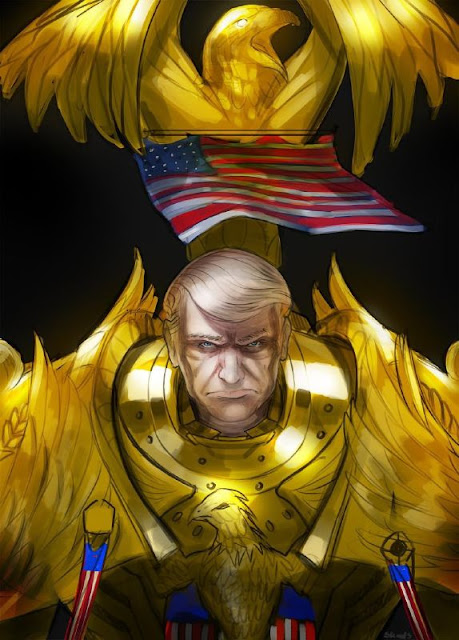 Being in Arabland as I am right now - long story, with pictures to follow later - I am rather behind on the news and my posting in general, but I did want to comment on the fact that Special Counsel Robert Mueller's investigation has now closed, and US Attorney General William Barr has reviewed the report, and the verdict is...

Absolutely NO EVIDENCE WHATSOEVER that the Trump campaign colluded with the Russians in 2016 to get the God-Emperor elected.

To which I reply:

"It seriously took 2 years and $25 million in taxpayer money to figure out something this freakin' obvious?!?"

(I was actually walking around outside yesterday wearing my favourite blue "STILL NOT TIRED" shirt yesterday around a rather beautiful marina and harbour, and I have to say, it felt amazing. All of this #WINNING is certainly putting a spring back in the steps of shitlords everywhere.)

Unfortunately, AG Barr's pronouncement included some language about the fact that the Mueller Report did not actually fully exonerate Donaldus Triumphus Magnus. And, of course, this was inevitably seized upon by butthurt liberaltards and their enablers in the news (((media))) everywhere as they desperately clutch at straws to come up with something - ANYTHING!!! - to reassure themselves that they did not, in fact, lose to a ridiculously coiffed orange-faced baboon two years ago. (That latter appellation is, I hasten to point out, their view of the God-Emperor, not mine.)

It is not the Special Counsel's job to exonerate the target of his investigation. A prosecutor's job in a court of law is to find evidence and construct arguments from them that show, beyond any reasonable level of doubt, that the defendant actually did what he is accused of doing.

Regardless of what you might think of Special Counsel Mueller - and, given how he was behind a shady deal of truly epic proportions to free convicted paedophile and Clinton supporter Jeffrey Epstein, I have an extremely dim opinion of "Lurch", as one of my right-wing friends calls him - the fact is that his job was to act as a prosecutor and investigate the question of whether or not the Trump campaign colluded with a foreign power to meddle in the American electoral process.

Following the epic waste of many millions of dollars and countless man-hours, he concluded that there was no real evidence to suggest anything of the sort.

The only reasonable and legally correct opinion that he could come to - as far as I understand the legal profession, anyway - was therefore that there was no evidence.

That is not an exoneration because it cannot be. Prosecutors cannot exonerate anybody. Only juries and judges can do that.

Now, I could be running off completely half-cocked here. I am not a lawyer. At least one of my readers is, however, and if I am wrong about these particulars, I have no doubt that he will set me straight.

Nonetheless, the fact remains that there is nothing left for the Left. They have failed, completely, utterly, and totally, in their attempts to unseat the God-Emperor through even the most shady of legitimate means.

There are only two possible outcomes here.

Either the Left will accept their defeat with good grace and circumspection, and wonder how in the name of Beelzebub's buttcrack they could have gotten things so spectacularly wrong, and repent of their evil ways and turn back to the light.

I'll wait a few minutes while you clowns catch your breath from laughing hysterically until you burst a lung, and pick yourselves up off the floor.

The second possibility is that they will double and triple down in their already completely unhinged attacks upon Donaldus Rex, and accelerate the already inevitable coming schism that will rip America, and the wider Western world, into armed and warring camps.

Look, that final collapse is going to happen. There is no getting away from it. The battle lines are drawn. I've been saying for years now that America's existence as a unified political entity is doomed - because the American nation no longer exists, and has been subsumed into the American empire.

That is not, by the way, any sort of brilliant original observation. I am merely referencing the works of other, far more brilliant, men like our beloved and dreaded Supreme Dark Lord (PBUH), and adding what little I can - and it is indeed very little - based on my own experiences and knowledge of history.

This is not an outcome that I want. But it is guaranteed to happen. And nobody, not even the God-Emperor and all of his legions from the Astra Militarum American heartlands and Adeptus Astartes internet memelords, can save the country.

The best that we can do, as Christians who firmly believe in the Word of the Lord, who bend the knee willingly before Christ Jesus of Nazareth and confess and witness Him as Lord and King, and who love the nations as the Lord Himself loves them, is to prepare our homes, our families, our bodies, and our souls for the days of the breaking.

For now, though, we can permit ourselves to engage in a bit of bare-knuckled meme-brawling against the Left, because the fact is that they lost. Badly.

And we can, and should, rejoice in that fact.

As for you and me, who are loyal to the God-Emperor and stand for the Imperial Truth that American can and should be made great again, we must continue to fight the good fight. Remember what that phrase means. It does not mean that we all survive through to see victory. It means that we stand for the Truth, we fight for it, and we pay a heavy price in this life for doing so - with the promise that in the next one, we will stand with the Father, who is Truth, in His kingdom.

I'd like to buy the guy heckling Jerry Nadler a beer.