... then why did the Roman Emperor Hadrian order the construction of one?

Although Hadrian's biographer wrote "(Hadrian) was the first to build a wall 80 miles long to separate the Romans from the barbarians", reasons for the construction of the wall vary, and no recording of an exact explanation survives.[10] Theories have been presented by historians, mostly of an expression of Roman power and Hadrian's policy of defence before expansion. On his accession to the throne in 117, Hadrian had been experiencing rebellion in Roman Britain and from the peoples of various conquered lands across the Empire, including Egypt, Judea, Libya and Mauritania.[9]

These troubles may have influenced Hadrian's plan to construct the wall as well as his construction of limites in other areas of the Empire, but to what extent is unknown. Scholars disagree over how much of a threat the inhabitants of northern Britain really presented and whether there was any economic advantage in defending and garrisoning a fixed line of defences like the Wall, rather than conquering and annexing what has become the Scottish Lowlands and defending the territory with a loose arrangement of forts.[9]

The limites of Rome were never expected to stop tribes from migrating or armies from invading, and while a frontier protected by a palisade or stone wall would help curb cattle-raiders and the incursions of other small groups,[11] the economic viability of constructing and keeping guarded a wall 72 miles (116 km) long along a sparsely populated border to stop small-scale raiding is dubious.[9]

Another possible explanation for the wall is the degree of control it would have provided over immigration, smuggling and customs.[9] Limites did not strictly mark the boundaries of the empire: Roman power and influence often extended beyond the walls.[9] People within and beyond the limes travelled through it each day when conducting business, and organised check-points like those offered by Hadrian's Wall provided good opportunities for taxation. With watch towers only a short distance from gateways in the limes, patrolling legionaries could have kept track of entering and exiting natives and Roman citizens alike, charging customs dues and checking for smuggling.[citation needed] Another theory is of a simpler variety—that Hadrian's Wall was partly constructed to reflect the power of Rome and was used as a political point by Hadrian. Once its construction was finished, it is thought to have been covered in plaster and then whitewashed: its shining surface reflected the sunlight and was visible for miles around.[9]

Huh. This Hadrian chap sounds an awful lot like another, much more modern, God-Emperor, going by the name of Donaldus Triumphus Magnus.

In case you are wondering what the walls along that particular northern frontier of the Roman Empire looks like today: 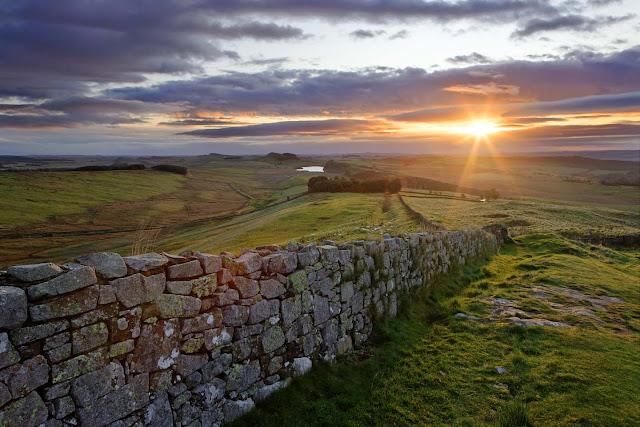 It is difficult to get a sense of just how high that wall is today from that shot (beautiful though it is), but if you look at this picture, you will realise quickly that back when the wall was built, it was very roughly 1.5x the height of the average man of the time.

In fact, as the Infogalactic article points out, it was considerably larger than this - large demolished sections of the wall were estimated to stand at 3.66m, or 12ft.

How long did it take to build Hadrian's Wall, using construction methods and materials from 2,000 years ago, over a length of well over 100Km?

Well, most of it was completed in about six years.

Again - that is with the kind of engineering and materials that the Romans had. It is fair to say that the Romans were the best engineers of their time, and for roughly a thousand years afterwards until the British and Germans came along. It is also fair to say that these days, we can do quite a bit better and work quite a lot faster than they could.

Here is a map of the walls that the Romans built: 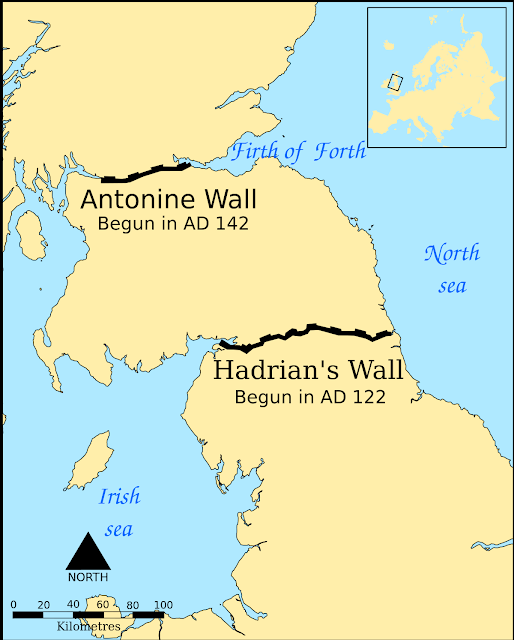 The Antonine Wall refers to the wall project of the succeeding Emperor Antoninus Pius. But Emperor Antoninus could not subjugate the northern barbarians, and so the next of the emperors to come along, Marcus Aurelius himself, essentially said, "Bugger this for a bag of crisps!" (in Latin, obviously), and reinstated Hadrian's Wall as a fortified barrier.

Well... Hadrian's Wall was built by about 130 AD. Roman rule over Britain lasted until about 410 AD. During that nearly three-century-long period, the northern barbarian tribes of the Celts and Woads were largely unable to break through and invade England - with the notable exception of a major barbarian incursion in 180 AD.

Three hundred years, one major barbarian incursion. Forts manned every 5Km along the wall. Regular foot-patrols of armed and trained legionnaires along the border with a far less developed and civilised set of nations.

The Great Wall of China, for instance, was built by the legendary (and legendarily cruel) Emperor Qin Shi Huang, the first true Emperor of China. Nobody really knows how long the original wall was, but it was rebuilt and restored and modified and lengthened repeatedly by subsequent Chinese Imperial dynasties and regimes. Apparently, the walls built under the Ming Dynasty - the last people to truly work on the thing - were up to 8,850Km, or 5,500 miles, in length (!!!).

But, given that the Chinese love to boast about their 5,000-year-old history and civilisation, it's fair to say that their wall worked pretty damned well for them on average. When their governments and peoples were strong, they were able to successfully defend their territory using the Great Wall. When their governments were weak, corrupt, ineffective, and inefficient, they were invaded and conquered by barbarians.

Again, all of this is directly analogous to the situation in the USA today. And all of this proves directly that walls do work to keep out invaders - but a wall by itself is not enough. It has to be actively manned and patrolled.

And that is what the US military is for.

If the US military is not used to patrol the border and enforce it, then it is completely pointless and should be totally disbanded. There is not the slightest use in having a military force if it cannot defend the homeland. That has always been the primary function and purpose of every military in existence - to defend the borders of the realm, first and foremost. Every other function and purpose is completely secondary to this most vitally important one.

Manned, patrolled, actively maintained walls work. They keep barbarians out, regulate commerce and traffic into the realm, and prevent smugglers and other assorted bad actors from getting in and wreaking havoc.

Build the damn wall already, God-Emperor Trump. Build it, and your re-election in 2020 is guarandamnteed.