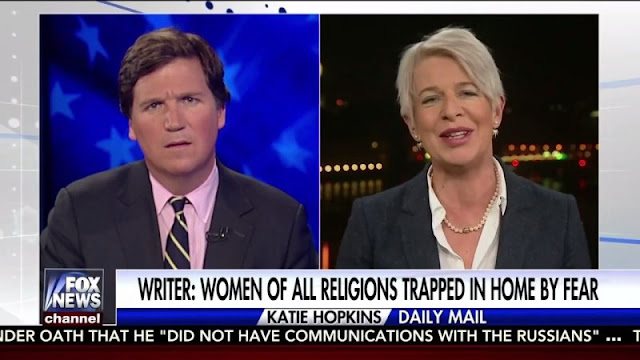 To people on the righteously awesome side of the Atlantic - y'know, the one with all of the guns, and the gun nuts, and the ammo - the United Kingdom of PommieBastardLand seems like it is full of effete limp-wristed wusses who come over all polite whenever confronted by any form of hardship. And, in all fairness, Americans - the ones who have not gotten completely pozzed out by living in the Leftoid freak show cities of the coast and the liberal elite centres, anyway - can be forgiven for thinking this way.

Every time a RIF goes all JIHAAAAAAD!!! in the UK, the Brits fall over themselves to apologise for their own (mostly imaginary) sins, and the media-political complex goes into overdrive trying to pretend that nothing has gone wrong, everything is fine, Islam has nothing to do with the what actually happened, it was just some asshole having a bad day who decided to go blow up or run down or knife to death a bunch of people.

For those of us who have woken the hell up (or never allowed ourselves to be lulled to sleep by the lies of the globalist establishment in the first place), the reactions of the stiff-arsed crowd over on that side of the Pond look downright... stupid.

It is truly astonishing to us, the children of the greatest, most powerful, most civilised, and most accomplished empire that was ever built by the hands of Man - and I am indeed such a child myself - that the very people who created that empire, can now be so unbelievably stupid.

How can it be that the people from a dark, damp, moss-covered, cold, foggy, often-rainy, usually quite miserable little lump of rock in the middle of the North Atlantic, who are usually morose and often quite drunk, and insist on drinking warm beer with bits of soil floating in it, could have created the British Empire, on which it was once said that the Sun never sets?

How can it be that a population of just 100,000 British troops and civil servants from that very island and those very people were able to rule over and manage and drag kicking and screaming into something resembling actual civilisation a country of THREE HUNDRED MILLION under the British Raj?

How can it be that the British people gave birth to the greatest and happiest geopolitical alignment in the world, the Anglosphere, consisting of their cousins and children, which has done more to promote the warmth and light of civilisation than any other similar alignment in all of human history?

The answer is simple.

And then something went horribly, dreadfully wrong.

They shed their freedoms. They disarmed themselves. They let the hordes of the Dirt World - which they once controlled, and did so much to civilise for so long - into their own country, in violation of every possible standard of decency and common sense.

And they allowed their own political classes, which they repeatedly elected, to sell them into a very comfortable and numbing form of slavery, where the State gives them everything that they could want - except a sense of purpose and pride.

What the British have done to themselves is a stark and terrifying vision of what America is doing to itself now - just 20 years or so farther down the line.

Fortunately, there are still a few Brits in public life left who love their country, who are proud of their great nation's history, and who are willing to stand up and speak for what they believe in.

One of those is a woman by the name of Katie Hopkins, whose work I have been reading for years in her capacity as a columnist for The Daily Mail.

She came over to the American side of the Pond to do a carpet-bombing run and drop some truth on people, and I have to say, she did a pretty damned good job:

This might not be the most apropos thing to say, especially from someone who wants to be a gentleman about a lady, but... bloody hell, that dame has balls.

I greatly admire Mrs. Hopkins's willingness to tell it like it is, and to put herself in harm's way for the sake of bringing the truth to light.

There can no longer be any question that large parts of Europe have simply given up on their own legacy, their magnificent Western civilisation. They have spent fifty years destroying the most fundamental pillar of that civilisation: their Christian faith, and all of the blessings that Christianity brings with it.

America has gone a long way down that same road - a road that seems paved with gold bricks and good intentions, but which always leads to a dark and hideous Hell. But in the last few years, Americans - about 60-odd million of them, anyway, many of them white - woke the hell up and decided that they didn't like where the country was going.

Thank God for that. Thank God for those people. And thank God for Katie Hopkins - short-haired, wrinkled, badly dressed, and high-voiced though she might be, for she has the courage and the temerity to say what very, very few of her countrymen are willing to say.
Email Post
Labels: #MAGA #WINNING culture wars office space philosophy politics travel