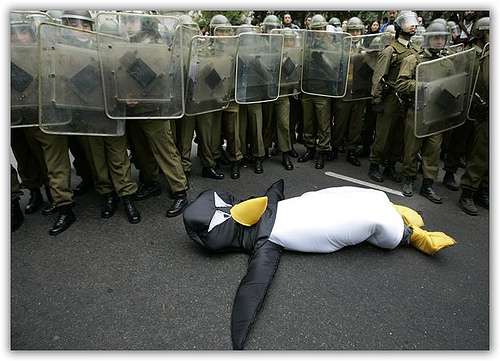 Most people who use Microsoft or Apple operating systems for their personal computers probably could not care less about the nature of the corporations which produce those vitally important collections of software. They likely do not particularly mind the fact that those same corporations are heavily SJW-converged and that, as a result, their operating systems become more bloated, inefficient, stupid, irritating, and just plain shitty with every subsequent release.

And most such people have likely never really thought about the possibility of exploring alternatives to Microsoft's Windows 10 or Apple's OS X.

Linux itself refers to a family of operating systems based around the Linux kernel, originally compiled by Linus Torvalds using Richard Stallman's GNU C compiler and distributed using the GNU General Public License. And that is about all the history that one really needs to know about Linux, because its development history is long, complicated, and only really interesting to serious geeks.

What you do need to know is that, these days, with the widespread and completely free availability of Linux distributions like Mandriva, Ubuntu, Mint, and several others - especially Mint - you now have a powerful, stable, easy-to-install, easy-to-use, beautiful-looking, richly-featured alternative to Windows and OS X, which runs on practically anything and puts you squarely in charge of how your computer looks and feels.

I personally use Linux Mint. I have convinced readers of this blog to use Linux Mint - and of course ended up performing long-distance tech support, from as many as twelve time zones away, for the same. I wholeheartedly recommend it for anyone other than the really serious gamer, because Linux Mint pretty much just... works. It is based on the venerable Debian architecture of Linux, and as such it is highly robust, stable, extensible, and has access to a truly gigantic number of packages and software options.

So it was with considerable alarm, then, that I greeted the news that the Linux Kernel Mailing List, which consists of a very large email group of all of the core Linux kernel developers, has now adopted a Code of Conduct - created by none other than SJW arch-daemon "Cancer" Coraline Ada Ehmke - after Linus himself apologised for being highly abusive toward other developers and coders on the mailing list.

To understand why this was such a colossally stupid mistake, you have to understand something about the concept of a "Code of Conduct". And for this, we must turn to the work of none other than our beloved and dreaded Supreme Dark Lord (PBUH), Voxemortus Malevolus I.

A Code of Conduct is nothing short of a full license granted to SJWs to hunt down and eradicate those who are "guilty" of being "offensive", because the terms of any CoC are extremely nebulous when it comes to what does, and does not, constitute "being offensive". Try reading through Cancer Coraline's "Contributor Covenant" and you will immediately spot the problem as long as you have more than two brain cells to rub together:

Examples of behavior that contributes to creating a positive environment include:
Examples of unacceptable behavior by participants include:


You could not be more fuzzy about what exactly constitutes harassment and unacceptable conversation if you wrapped the whole thing up in cotton wool.

The issue here is that people who actually know what the hell they are doing have no time or patience for observing such silly niceties.

I have considerable experience working with scripting languages myself. I know what it takes to write good code - I am not by any means an elite-level programmer, but if you give me a task to accomplish in VBA, R, MATLAB, Python, JAVA, Javascript, or the proprietary coding language used by my last employer, then I can get it done in pretty good time.

And as such, I know full well that the fastest way to get on a developer's nerves, and the fastest way to shred his patience and waste his time, is to force him to tolerate idiots who have no idea how to write, compile, and maintain high-quality code.

It takes a very particular mindset to be a good developer. You have to have a very structured, organised, logical way of thinking. You have to be willing to ask questions and do things that others just won't. You have to be something of a perfectionist. And you have to be absolutely ruthless with yourself, and if necessary others, in order to achieve a goal.

These attributes by definition make really good software developers a bit prickly and difficult to work with, because they tend to be hyper-focused lone wolves who do not brook interference and who regard truly good code as their Holy Grail.

Really good developers never stop working on their code. We always want to improve what we have done because we always want to get better, to find more elegant and simple ways of solving fiendishly complex problems. And things which get in the way of that most sacred of tasks immediately get treated with utter contempt and scorn.

The Code of Conduct adopted by the LKML has already generated a massive backlash, with contributors to the kernel threatening to withdraw their code contributions if the CoC is not removed and withdrawn. As Eric S. Raymond, an elite-level programmer himself, has pointed out, that threat has real teeth and is extremely dangerous for the Linux kernel, which depends on code from thousands of contributors and companies.

The reason why this threat has teeth, and the reason why it is terribly dangerous for far more than just Linux desktop users, is because Linux itself powers virtually everything that you know and love about the internet.

Most of the world's internet servers run Linux. The Google-developed Android operating system is a Linux derivative and uses a modified version of the Linux kernel. Several of the world's biggest supercomputers run on Linux. The system permeates every level of academia, the government, the military, and the corporate world.

Hell, my erstwhile employer uses thousands of Linux blades to price trades and positions across all of its portfolios.

The Linux kernel contains device drivers and instructions that allow the entire architecture of Linux to access hardware attached to any device or computer. Without the right code in the kernel, your computer simply stops working. Your smartphone stops working. Just about every useful server and virtual application across the entire internet stops working.

I have to say that I, personally, am absolutely delighted to see so many Linux developers getting so pissed off about the implementation of a "Code of Conduct". A Code of Merit is far preferable to such an abomination, because the fact is that good developers can and absolutely will insult and demean those that are not good coders.

Whether you are an LGBTQIAWTFISTHISSHIT or Person of Whogivesacrap is not relevant to whether or not you can code.

If Linux persists in using this nebulous farce of a "Code of Conduct", then it is guaranteed that the best developers will simply stop working on the Linux kernel and stop improving it. And then the Linux kernel, which by the way already has some well-known problems with "bloating" due to its structure as a "monolithic" kernel, is going to fade away and be replaced by something less stupid, but also observably worse.

To understand why the use of a Code of Conduct is such a huge problem, let's take a look at what used to be a highly popular and flexible programming language which adopted Cancer Coraline's Code of Conduct.

That language would be Ruby on Rails, an extension of the once very popular Ruby programming language, originally used by Twatter to build out their interface and functionality before they moved to something with a bit more power and scalability.

All you have to do is compare Ruby, or Ruby on Rails, with its competitors in the object-oriented scripting language environment, to see the problem: 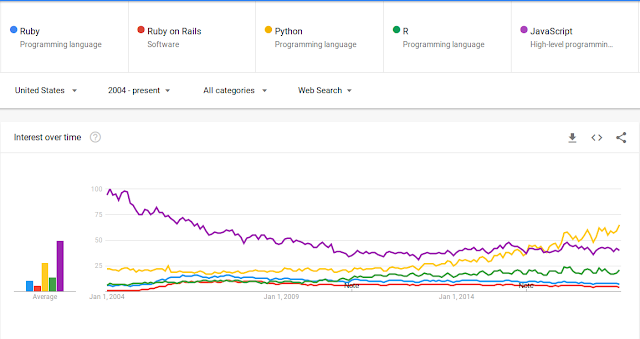 As you can see, interest in Ruby and its upgraded variant have stayed static or declined, even as alternative, non-converged languages like Python have taken off.

And that is for a very simple reason: good developers still get to do good work on the fundamentals of Python, Javascript, and R, without having to worry about a lot of nonsense associated with social justice asshattery.

Cancer Coraline's Code of Conduct is going to be nothing short of a disaster for the Linux kernel. At this point, there are three likely outcomes: the LKML gets thought-policed into irrelevance and uselessness; the Linux kernel gets "forked" and the code gets maintained and compiled on a very different set of repositories by a large number of organisations; or the entire CoC gets completely scrapped and the SJWs get chased the hell out of Dodge.

Given that Linus himself has now caved to SJW pressure and, very stupidly, stabbed his own closest friends, associates, and top developers in the back, it is likely that Option 3 will not happen - unless various kernel contributors exercise the nuclear option and yank their code. I consider that to be an unlikely prospect at this point; most people love to complain about how horrid SJWs are, but very few organisations and employers actually do anything about purging them from within their own ranks.

More than anything else, this particular tempest is a reminder, yet again, of the dangers of letting SJWs in through the front, back, or side doors of any organisation, no matter how large or small.

They will find a way in unless you exercise the utmost vigilance and ruthlessness in crushing them.

They will corrupt your organisation from within.

They will destroy the morale, skill, and drive of your top performers.

And finally, they will collapse your organisation into rubble.

Don't let them. Find the Leftists and SJWs within your own workplaces - and ruthlessly chase them out. Fire them, without cause if need be, and ensure that they never get hired into your industry ever again if you can help it at any level.

Yes, it is a nasty and horrible thing to do - but this is not a pleasant world that we live in, and these SJWs are not pleasant people. Nothing shows this more clearly than what has happened with the Linux kernel project - do not be stupid enough to think that it cannot happen to you.