It's Friday again, and I have to say that where I am, at least, the weather is horrible, but the sights and sounds are a world away from the appalling spectacle of the judicial confirmation hearings for Judge Brett Kavanaugh back in the USA.

I may have more to write about that in the near future, because there is so much to say about how a good and decent man has had his life destroyed to serve a political agenda - and about how he came out swinging and took the fight straight to those demonising him.

For now, all I can say is that if what happened, and is still happening, to Judge Kavanaugh, is now the new standard by which America selects its judges and government appointees - then God help us, because only He can save America from its own stupidity at that point. And I have a pretty good feeling that He will not lift so much as the smallest joint of the smallest of His fingers to do so, because America richly and thoroughly merits its own destruction.

With that said, let us try to take our minds off of politics for a little while, and concentrate on enjoying the weekend.

For this week's installment of what is, let's face facts, everyone's favourite part of this blog, we take another trip to the Far East - this time to Korea, where we find ourselves face to face with a self-titled "Goddess of Love & Sex" who spends an awful lot of time and effort posting racy pictures of herself on Instaham.

She calls herself "Moon Maison", and I find myself rather amused by the fact that she asks her viewers and subscribers to actually read her captions instead of just drooling over her pictures.

Uh, yeah, sure, lady. You're all about deep philosophy and spiritual healing. Right.

Since she is all about truth and beauty - at least, in her own mind - I figure we should take her up on her notion by looking at her photos. Fair's fair, after all.

Enjoy the weekend, boys. This week proved to be one of the ugliest, nastiest, most disgusting and despicable weeks in politics and in several other areas of life in recent memory, so now, more than ever, be sure to decompress a bit, spend some time with friends and family, be safe and moderate, and may God bless you as always. 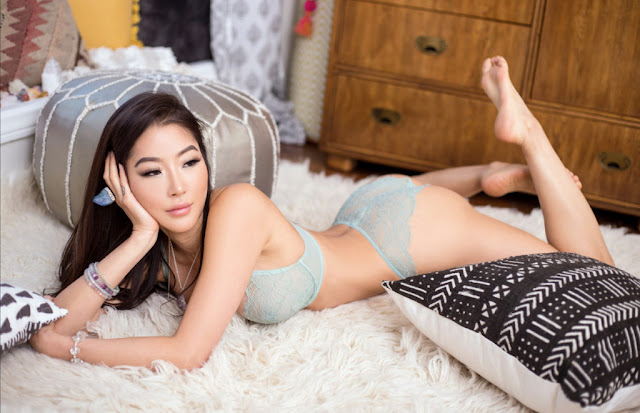