Another week, another Friday, another chance to post up gratuitous pictures of a flaming hot girl. As I may have said a few (dozen) times before, sometimes this whole "posting random shit on teh innarwebz for da lulz" shtick is very, very good fun.

Greetings from St. Petersburg, by the way, for those of you interested in playing the "Where the hell is he now???" game. I'm here for a couple of days to enjoy the sights and sounds of what is, without question, one of the most beautiful and picturesque cities in the world.

It is not all roses, though. You see, one thing that I have discovered about Moscow from living there kind of sort of like a Muscovite - as in, within an apartment outside of the city centre - is that there actually are not that many genuinely bad areas of Moscow. The city is not like New York or London, where it is really obvious, really quickly, that you simply do not want to stay in certain parts of town. Unlike those megalopolises, Moscow's neighbourhoods are pretty much always full of parks, recreational areas, forests, and pleasant greenery. Moscovskiy Oblast in general is a lot like... well, Pittsburgh, if I'm honest - just nice and pleasant overall no matter where you go.

I am not for even a single moment suggesting that there are NO bad parts of Moscow. That would be stupid. I'm just saying that it kind of looks more or less the same no matter where you go outside of the centre - lots of apartment blocks and tall buildings, but with plenty of green space in between. It's just a nice place to be.

SPb, on the other hand, has a distinctly different atmosphere once you get out of the city centre. All of the really good pretty stuff is in and around Nevskiy Prospekt and the surrounding areas. Once you go out past the city centre, though, you basically wind up in Leningrad. And the problem with that is that, well, Leningrad was built on Soviet principles of design, architecture, and space.

In other words... it's depressing. Despite the plentiful green areas and public parks, the fact is that SPb was founded on swampy land on the Baltic coast. This means that it goes from sunny to windy to cloudy to foggy to rainy and all the way back to sunny again, in the space of about an hour - and if it's not sunny, it's cold.

Since I am, after all, in the Slavic part of the world, and since it is getting on to autumn - a very warm autumn thus far, it must be noted - I figure it might be time to introduce you to this week's serving of bodaciousness to get the weekend started off right.

Her name is Luciana Javorcekova and she is originally from Bratislava in Slovakia - another lovely Slavic country which of course I would certainly like to visit someday. She is well known for being naked, and not a whole lot else.

In fairness, she is really good at her job.

As Instathots go, I suppose she isn't too bad - she has a little eight-year-old girl, and she herself is only about 28 or so. I just hope that she is prepared for the inevitable questions that will pop up when her girl gets to a certain age and starts asking uncomfortable questions about her mother's profession.

Enjoy the eye candy and the weekend, chaps. See you on the other side of the weekend for another round of Monday morning spleen-venting.

Got any suggestions or requests for this segment of the blog? Leave them in the comments below. 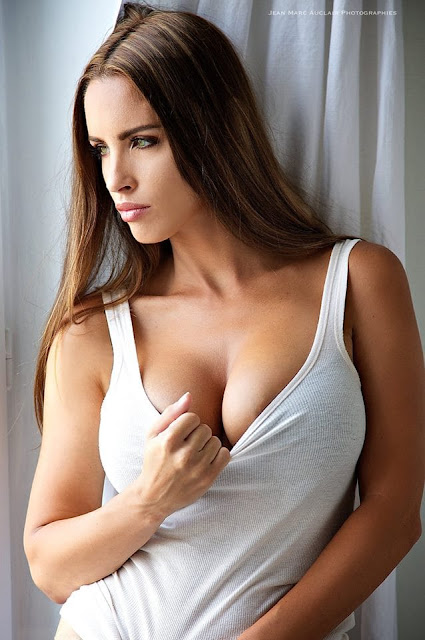