For those who ventured into the howling dark... 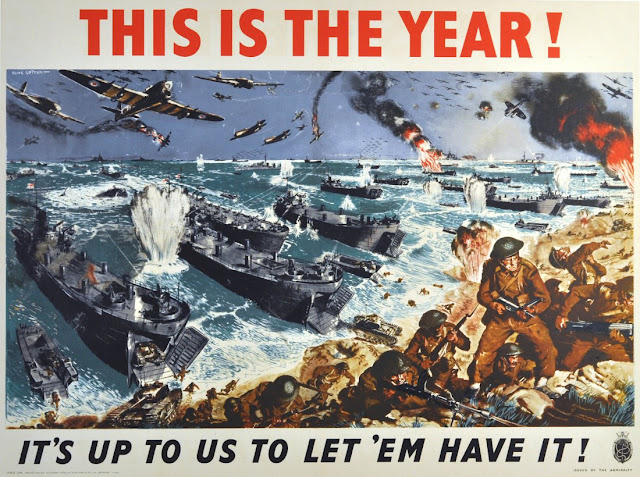 June 6th, 1944, is a day that the Western nations hold sacred - or at least, those of them with the good sense and wit to remember what it stands for - and with very good reason.

Seventy-four years ago today, over a million men stormed the beaches of Normandy to open up a third front against the tenacious and entrenched German army, with the clear aim of ending the war and catching the Krauts in a triple-pincer movement.

In the south, British and American forces had pushed through into Italy. In the east, after taking truly hideous losses for three years, the Russians had snapped the back of the German eastern command, broken the siege of Leningrad, forced the Wehrmacht to retreat from Stalingrad, and engaged and destroyed the German panzer divisions in the biggest tank battle ever recorded at Kursk.

But the final invasion to destroy the true evil of the failing Nazi ideology had yet to take place.

That all changed on a choppy, stormy early June day, when tens and then hundreds of thousands of men landed in their amphibious assault craft on the beaches of France.

Many of them made it through unscathed - at least, on that day. But hundreds, thousands, of others were not so fortunate, and paid with blood and death on Omaha Beach and other contested zones, where the Germans made them pay for every foot of ground gained.

It is my custom to acknowledge the sacrifices of those men on this day, because I know full well that without them, there would not be a "West". The glories and wonders of this civilisation that I live in would not have come about if the courageous living and the honoured dead of that war - on both the Western and Russian sides - had not fought back against a genocidal evil that would have seen them all enslaved.

I cannot think of a finer tribute to the men who died that day than to let one of their fellows speak for them, about the horror and the glory of war.

So here is a letter from one Maj. Gerald Ritchie, 8th Yorkshire Parachute Regiment, to his sister:

Thank you so much for your letter received some time ago when I was in hospital. As you see, I am now out, thank goodness, and am more or less all right again. I have still a bit of a hole in my arm but nothing to speak of. I must say I was terribly lucky as the bit of shrapnel missed everything important. It went in about four inches below my shoulder, rather on the inside of my arm, and stopped just below the surface on the outside of the arm towards the back of it. As you say, it was a party which I wouldn't have missed for anything, but even though I wasn't in it for 48 hours, and for my lot the first part, was, from all accounts, a picnic, compared with the time they had after I left. It all seems rather like a particularly bad dream looking back on it.

We emplaned late in the evening of the Monday and it all seemed very unreal. It was difficult to imagine that by dawn on the next day, we should have been tipped out of an aeroplane over France and should have landed in a place where there were quite a number of evil-minded Boche, whose one object would be to liquidate us before we could do the same to them.

It all seemed so like an ordinary exercise, and this illusion (very fortunately) went on for me right up to the moment I landed with a bump in a field.

The doors of the aircraft were opened while we were still over the sea and being No1 to jump in my aircraft, I had a grand view as the coast of France appeared below us.

I could see no sign of life below us, thanks to the RAF, and although I believe a few shots were fired at us, I never saw any. I remember my signaller, who jumped No2, saying, "Gawd! Look at those bomb craters!" However, we were soon over those.

A few moments more and the red light came on and then the green, and out I went, my mind a complete blank as usual when I jump. I can remember very little of my descent, it didn't take long anyway. I did rather a poor landing, my own fault entirely, and bruised my knees which made crawling most painful, and I had a certain amount to do during that day! Anyway, I scrambled to my feet and unhitched myself from my parachute and took a look around.

I knew I was more or less in the right place as others were coming down in the vicinity, but I was not exactly sure where. There was a horse grazing in the field where I was, who didn't seem to like my presence much, so I went off in the direction where I thought our rendezvous was.

There were some machine-guns firing at the planes over to the east and quite a lot of flak and stuff to the south, but no sign of any enemy in our vicinity or in the direction I was going. There were numerous others about from our battalion and in a little while I met one of my platoon commanders and then the colonel and then another captain and we checked our position and arrived at our objective, a quarry, without any untoward incident.

At this quarry was a cottage, and when we arrived, the French family came out and we shook hands all round and wished each other "Bon jour", most inappropriately! As it was then 2am and the "jour" was not at all "bon". A few hours after the sea launching, the commandos got up to us and came across our bridges, again most cheering, and things were a bit hectic just then. I remember that one lot had a piper with them, which was the first thing we heard of them, and a very pleasant sound it was, and I have taken a better view of bagpipes ever since!

A lot of it I've given rather sketchily, and I could never hope to give you the atmosphere, as it were; it is really quite indescribable. The extraordinary smell of broken buildings and explosives; the countryside, very like the Cotswolds really, littered with gliders and parachutes; gliders everywhere, in hedges and fences, some broken so much that it looked that no one could have survived and yet in very few cases was anyone hurt on landing. It was really an amazing but very unpleasant and tragic two days. The second-in-command of my company never appeared at all and was found four days later, he had been killed soon after landing; and my best friend in the battalion never turned up at all, nor anyone from his plane, so what happened to him I don't know.

After I left they had rather a sticky time and most of the officers were either killed or wounded, more the latter than the former fortunately. Our colonel was killed, the announcement was in today's Telegraph.


The clearest and most obvious sign that a civilisation is approaching its richly deserved destruction can be seen when it fails to acknowledge those who fought, bled, and died for it. No society, no matter how rich or free or strong, will stay that way if it fails to give respect to those who gave their all in war so that their descendants could live in peace.

It is only through giving that respect, acknowledging those sacrifices, and thereby inspiring future generations of men to understand that "the noblest fate a man can endure is to place his own mortal body between his loved home and war's desolation", that a free society remains so.

It has become trite and gauche to utter the words, "Freedom is not free". But it remains true nonetheless, and no amount of fashionable self-loathing can change this. Freedom - this celestial, Divinely-ordained gift given to you and me - requires many, far too many, of us to pay its price. That is how it must be - for ultimate cost is and must always be traded for perfect value.