Of late I have been doing a fair amount of thinking about the nature of moral codes that we humans follow. It is plainly apparent to anyone with sense enough to count time to music that the Western world has gone profoundly wrong, to the point where almost the entire system of morality that once governed the European nations has been largely discarded.

This is indeed a tragedy, because the moral code around which the European nations and their descendants built themselves was, and still is, the best one that humanity has ever been given.

Note - I wrote, "given", not "devised". And that is because the moral code by which the most successful nations on Earth governed themselves, did not come from the mind of any one man of singular virtue and wisdom, or even a group of highly moral men.

That code came from the Almighty Himself. We know of it as the Ten Commandments.

No moral code in human history has been subjected to more debate, analysis, and deep examination than the Ten Commandments. No set of moral laws devised by Man has ever come anywhere close to matching these Ten for brevity, simplicity, and profundity. And no such man-made code has ever been so thoroughly tested, and found to be robust against every possible situation.

The modern academic consensus generally argues that the Pentateuch, the first five books of the Old Testament, and especially the Book of Exodus in which the Ten Commandments are first handed down, were written by several different authors instead of by Moses alone. Without getting into an argument about whether that is true or not, it is worth asking oneself: could human intelligence have come up with anything as simple, yet as profound and as robust, as the Ten Commandments?

Well, to answer that question, we first have to see what the Ten actually say.

Here is the New International Version translation of the Ten. I use this specific translation because it avoids the very irritating misunderstanding that is common with the King James Version concerning the Sixth Commandment. The KJV Sixth Commandment states, "Thou shalt not kill", the meaning of which was perfectly clear at the time in which the translation was issued, but has since been lost to modern ears and is now quite confusing to anyone who does not know the subtlety of the translation. The confusion arises from the use of "kill" versus "murder" - and in the original Hebrew, the Sixth Commandment stated plainly that "Thou shalt not murder". 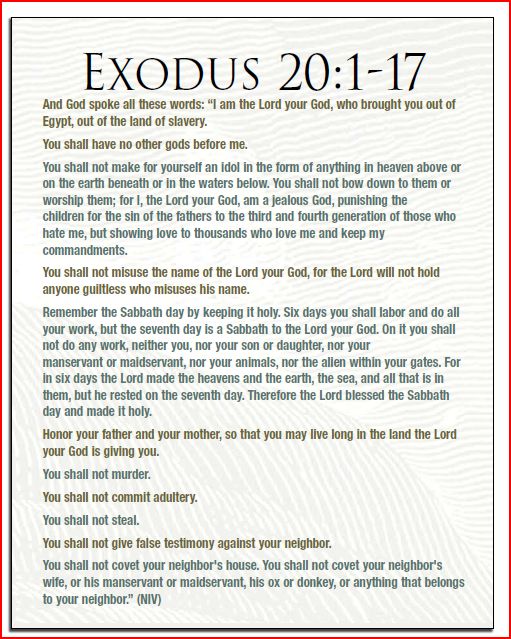 There you have it. Ten simple, yet unbreakable, laws that are all that is required for a just and moral society.

On its face, this is a hugely controversial claim. How could just ten laws be all that is needed to establish a just and moral society, if only everyone obeyed them?

Upon closer examination, though, not only is this claim justified, it is ironclad:


Now compare this code with previously established codes of law - most notably, the Code of Hammurabi, which predates even the earliest known copies of the Old Testament by nearly a thousand years.

That Code contains 282 laws, roughly half of which are concerned with contractual law. It was arranged in groups so that each stratum of society might understand what was required of them - and delineated carefully the duties of king to subject, lord to vassal, father to son, master to slave.

Compare all of that to the laws found in the Decalogue, which states quite simply that they are the Laws of the Living God, and therefore cannot be broken or overruled; which mandate a day of rest for all men, regardless of social station; which require all men, of any social standing, to be honest; and which puts the refutation of theft at the very core of the Law.

At every level, the Decalogue gives a template of moral and just behaviour that one cannot break without severe consequences.

If the Decalogue does not come from God, and is instead merely a form of treaty and obligation codified and translated into civil law, then it is merely a set of laws created by men, and therefore can be broken with near-impunity.  If there are no consequences from a higher Power for breaking these laws, then they become about as meaningless as the laws against jaywalking, spitting gum onto sidewalks, or speeding are in much of the United States of America - because they are not enforced. And a law that is not enforced, is not a law.

If Man is allowed to worship whatever idol he wishes, then he can pick and choose whichever aspect of the Divine that most conveniently supports his needs. This by the way is not far removed from Hinduism, which is an idolatrous way of life and which argues that a man can worship many gods who are all part of one God. The problem here is that there is still no link between Divinely ordained law and punishment for transgressing those laws - the chain of command and obedience is broken.

If Man is not required to avoid carrying the name of the Almighty in vain, and therefore may abuse that Name whenever he wants, then all manner of evil can be done in the name of God - and Man once more puts himself in the position of pretending to be his own god, with disastrous and devastating consequences.

If men are not given at least one day of complete rest to themselves, to relax and contemplate and worship, the result is overwork, stress, pain, and frustration - to the detriment of all, starting with the ones that a man loves the most.

If a man does not honour his mother and father, what is his worth as a man to his people? Virtually none whatsoever; all of us know at least one man through our personal acquaintances who is a burden upon his parents and who dishonours all that they stood for. And we know that such a man is a waste of blood and organs.

If a man can get away with murder - if the immoral or unjustified taking of a human life is not forbidden - what then is forbidden to him?

If a man can commit adultery at will, then he has no need for self-control, and can take whatever he wants from whomever he wants. Sex and love are the most powerful binding forces between men and women and should never be abused; societies that have permitted or turned a blind eye toward adultery have rarely stayed strong and healthy for very long. Including, of course, our present one.

If a man can get away with theft - every other law, whether man-made or divine, is worthless, because any law is fundamentally about the preservation of some form of personal property, whether that property is physical, such as one's house or possessions, or spiritual, such as one's soul.

If a man can lie, his word cannot be trusted, and if there is no punishment for his lies then his word is worth less than the effort taken to utter it.

And if a man can covet... well, that way lies the madness that we call Socialism. It does not take much to realise that covetousness is at the heart of so much of the evil that Man inflicts upon his fellows.

As Rolf Nelson pointed out in his brilliant book, The Heretics of St. Possenti, the more one examines the Decalogue, the more one realises that these ten Laws are all that is needed to create a just and moral society.

The Decalogue is simplicity itself. No more than the Ten are required - but not one of the Ten can be disposed of without terrible consequences.

No more, and no less. That sounds pretty close to the definition of "perfect" to me.

I do not pretend to be any sort of Biblical scholar, academic, or theologian. I do not pretend to know all of the subtleties of the debate concerning the authorship of the Decalogue. Maybe a particularly brilliant man did write it - or maybe it came about as an accumulation of thousands of years of wisdom.

I merely note the absurdity of the idea that imperfect men, no matter how wise, no matter how brilliant, came up with a perfect code of morality. One does not get perfection from imperfection; among other things, this is a violation of the Second Law of Thermodynamics.

If someone can come up with a good argument showing that the Decalogue is indeed imperfect, and that more than these laws are required to build a just society, then I will certainly listen and read respectfully. But from what I can see, as a naive observer, this seems quite a daunting task. And I note that nobody else, in the thousands of years since the Ten were given to Mankind, has ever come up with anything better.

The dreadful heresy of Christianity that we call "Islam" is a prime example of this failure. The Five Pillars of Islam are not moral laws. They are basically propaganda, designed to create blind followers, not thinking and moral men who uphold an inviolable Law given by the Almighty. Only the third pillar, concerning the giving of alms, can be considered a moral imperative; the other four are basically all about giving men something to do in order to worship their moon-god.

No matter what sceptics try to argue, no matter where they turn, they are confronted with one deeply uncomfortable yet unavoidable reality:

No one, before or since, has ever come up with a better moral code than the Ten.

And, if you believe - truly believe - that the Ten were given to us by a stern, just, but loving God... then no one ever will.
Email Post
Labels: Christianity philosophy religion