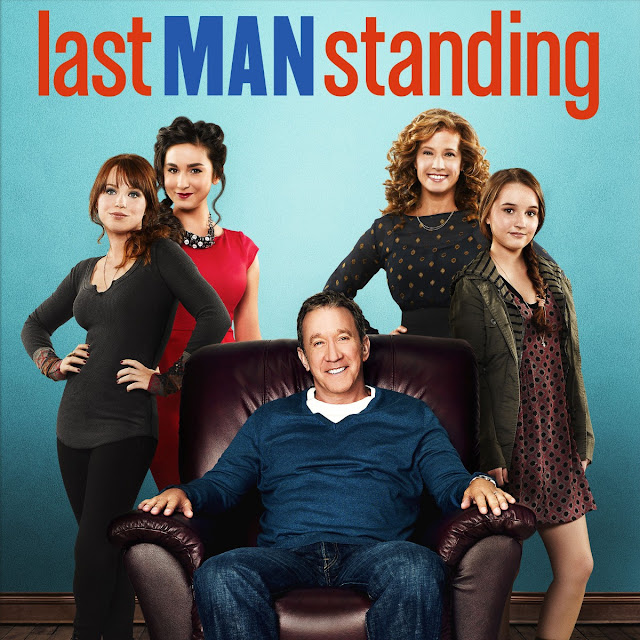 Exactly a year ago I wrote about how the superb ABC comedy Last Man Standing, starring really-for-real Hollywood right-winger Tim Allen, was canned by its home network because... reasons.

It was a truly retarded decision at the time, and has since been revealed to be even more so. The two highest-rated comedies on ABC's prime-time lineup were Last Man Standing in second place and Modern Family in first.

One of these two shows was a heartland- and family-friendly show full of warmth, good humour, great jabs at liberaltards, and a strong nuclear family centred around a Christian conservative Alpha-male loving father and husband.

The second of these two shows was, and is, one of the most SJW-converged wank-fests in all of modern television, featuring a "blended" family of a man and his second wife and their various children from all of their marriages, and a gay "married" couple. It also features Sofia Vergara, which frankly is probably the only reason why a large number of straight men watch the show. 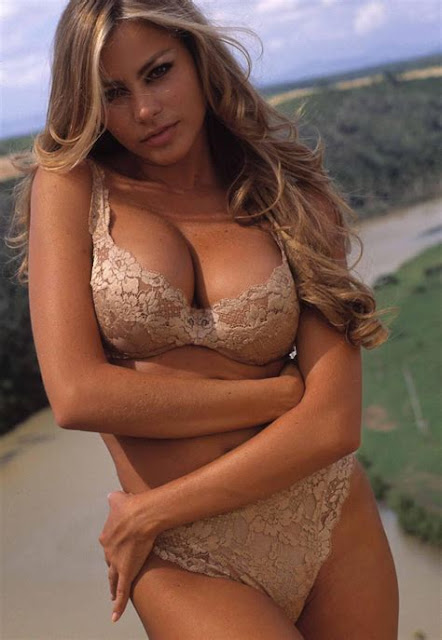 Uh... wait, what was I talking about again?

(Seriously, you guys have no idea how difficult it was not to use that as an excuse to post a bunch of bikini pictures of Ms. Vergara. I know she's way past her prime and all that, and she's married - again - but she serves as a reminder of what an artist God can be when He sets His mind to it.)

So anyway - the Always Broadcasting Crap network decided to kill off its second best performing comedy show because it was supposedly "too expensive", or some such nonsense, in spite of its extremely loyal fan base and highly regarded cast and writers.

We all know the real reasons why it got cancelled, though: Tim Allen is a vocal conservative, a family man, and a Trump supporter (albeit a cautious one). And Channing Dungey, head of ABC Entertainment, is... well, let's just say very unlikely to be any of those things:

In the last 24 hours, however, Fox - the original creators of the show, actually - gave all of us rednecks some great news to look forward to:

The Tim Allen-starring blue-collar comedy Last Man Standing will be brought back to TV as Fox has picked up the popular series after ABC abruptly canceled it last spring.

“Excited? Team LMS was in the sixth inning, ahead by four runs, stands were packed, and then for no reason, they call off the game. It leaves you sitting in the dugout, holding a bat and puzzled. Now we get the news from Fox that it’s time to get back out on that diamond — hell yes, I’m excited!” Allen said in a statement on Friday.

“Now we get the news from Fox that it’s time to get back out on that diamond — hell yes, I’m excited!” Allen added. “When I heard the offer to create more episodes of Last Man Standing, I did a fist pump so hard I threw my back out. It’s the fans! I could not be more grateful for the fans who wrote petitions and kept up the passion and incredible support for the show. And a fist pump, ouch, for [Fox Television Group CEOs] Dana Walden and Gary Newman at Fox for not only listening to the fans, but for making the bold move to bring Last Man Standing back. I’m sure audiences will be curious to see what we look like after all these years. Oh, has it only been one year? Well, just goes to show you — a lot can happen in a year.”

This is, indeed, great news. As commenter Eduardo the Magnificent pointed out in response to my post from a year ago, LMS was quite possibly Tim Allen's penance for playing the bumbling inept goofball all the time on Home Improvement. And the fact is that his portrayal of Mike Baxter as a sort of college-educated Archie Bunker was, quite simply, superb.

I supported the character, and the show, from the first time that I watched the pilot episode. It portrayed a wholesome, happy family led by a true patriarch who truly lived for God, country, and family. Mike Baxter was firm but fair and loving with his three daughters, and was supported by a wonderful and beautiful wife, played superbly by the ever-excellent Nancy Travis. And the youngest daughter in the family, Kaitlyn Dever, did a great job of portraying a conservative young lady raised the right way to fight for what she believes in, without being a giant feminist pain in the ass about it.

So when the show was cancelled, I was certainly severely cheesed off - and was even more so when Netflix removed it from its lineup of available content earlier this year. (BASTARDS!!!).

But now, the show is coming back - apparently with most of the original cast intact. It remains to be seen whether Hector Elizondo, Kaitlyn Dever, and Molly Ephraim will return; I certainly hope they do. The show simply will not be the same without them.

The best thing about this news, though, has got to be the other half of the announcement from Fox:

Fans who were left outraged after Fox dropped Brooklyn Nine-Nine can now breathe a sigh of relief after NBC announced it will pick up the beloved American police sitcom.

NBC has renewed Brooklyn Nine-Nine for a 13-episode sixth season.

Robert Greenblatt, NBC Entertainment chairman said: 'Ever since we sold this show to Fox I've regretted letting it get away, and it's high time it came back to its rightful home.

As you might expect, the liberaltards were not happy about seeing one of their favourite (and therefore deeply unfunny) shows get canned: 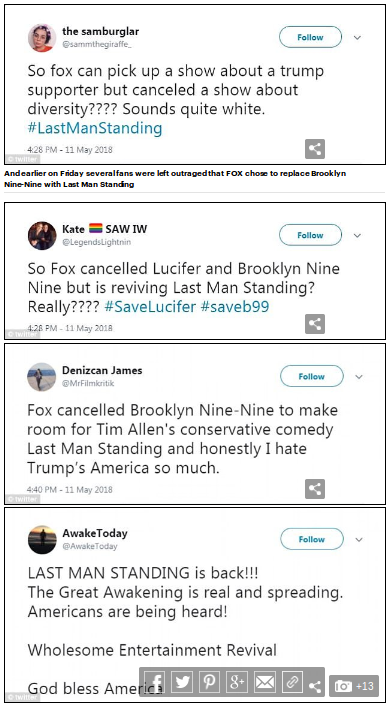 I tried watching a couple of episodes of Brooklyn Nine Nine back when I was still subscribed to Hulu. That must have been a couple of years ago. And I was distinctly unimpressed.

It was your typical SJW-heavy network show. It was boring, painfully staged, and filled with "diverse" characters pretty much for the sake of diversity. The police captain was a gay "married" black man. There was a fiery Latina who was apparently the only competent cop out of the bunch, a really annoying white blonde chick (played by Chelsea Peretti, who is actually funny when she tries), and all of the men involved were mostly bumbling morons.

The show hasn't been killed off, yet, but if there is any justice in this world, NBC's Brooklyn Nine Nine will tank, and the new Fox-based Last Man Standing will flourish.

Only time will tell. It could be that Fox completely screws up the formula of one of the best sitcoms since Becker - another criminally underappreciated comedy show from back in the day, which also happened to involve Nancy Travis in its last two seasons.

But I remain optimistic. The culture wars have mostly been lost for us on the Right - but once in a very great while, we do win one little victory.
Email Post
Labels: #MAGA #WINNING culture wars EPIC liberal stupidity masculinity office space SEXISS