The Winterborn, Pt. 2: The leftover women 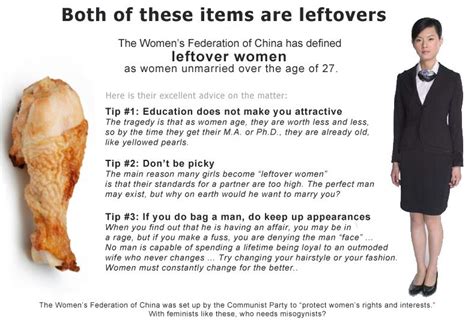 In the first post of this set, written way back in February 2017, I discussed the coming of a "demographic winter", brought on by a historically unique combination of unprecedentedly high individual productivity, and collapsing birth rates throughout the developed and much of the developing world. At the time I predicted that the result would be a severe and harrowing time of collapse, followed by an age of renewal in which patriarchal values would make their comeback.

In this second post of the set, I am going to look in more detail at one of the specific reasons as to why global demographics are in such bad shape, and what that means for women in particular.

We start in an odd place: China.

Among the Chinese there is a phrase, 剩女 (sheng nu), which literally means "birth daughter" but is usually translated from Mandarin as "leftover women". It is a derogatory term used to describe women in their late twenties or older who have not yet landed a husband and started a family.

This is a phrase that I have seen in use for at least five years, and the phenomenon only appears to be getting worse in China (and India) as the economy there rapidly develops and the population urbanises:

At first glance, Chinese women should not be in this situation. The naive observer would ask, how is it possible that a nation with over a billion people and a culture dating back five thousand years, could have women who cannot find men?

Look a little deeper, though, and the answer becomes obvious.

There are well over 33 million more Chinese men than there are women. The country has a population of over 1.4 billion and a population growth rate of about 0.59% at this time. However, China has had a One-Child Policy in place for decades, which placed severe penalties upon parents if they exceeded their allotted quota of children.

On top of this, Asians across the continent- not just in China, but in India and Western Asia as well- have a strong cultural preference for sons over daughters. This is because, in Asian societies, sons usually live with their parents even after they get married and are expected to take care of their parents in their old age; by contrast, when daughters get married, parents usually pay a (pretty significant) "dowry" to "offload" the bride onto her new family.

When one looks at things in this light, one realises very quickly the pickle that the Chinese find themselves in.

It comes down to a simple problem of relative scarcity. Women now have their pick of men- and, as China has spent the last forty years clawing its way out of the Hell of Communism and into a form of "managed" capitalism, urban Chinese women are in many cases economically independent as well.

It turns out, of course, that this is not merely a Chinse phenomenon; it is a global one.

Men in the West like to complain often and loudly about how women in the Western nations are opting for careers over families in their early- to mid-twenties, and delaying motherhood until their early thirties in many cases. But, as China's case has shown above, this is a common problem and will continue to be so as long as women have unrestricted choice and economic freedom to live as they please.

This phenomenon is causing population growth to crater and collapse worldwide, even in unexpected places and cultures that were once highly fertile and reproducing at rates that far outstripped the Western world. As David P. Goldman pointed out in How Civilisations Die, even parts of the Islamic world are facing a population crisis of a sort, as birth rates collapse from a robust 4-5 (or more) births per woman, to 2 or fewer.

The root of this problem- and it is a problem, a terrible one- can be traced back to one single factor:

Western, and many Asian, women today are not just economically independent of men- they are quite often subsidised at the expense of men.

This is a natural result of the decades-long movement towards equality and women's liberation. When women do not depend on men to keep them fed, clothed, housed, and warm at night, but can instead go out and earn their own money and live their own lives independently of men, the result, always and everywhere, is population collapse.

We have known this to be true since the time of the ancient Greeks, when Aristotle wrote of the way in which Spartan society collapsed because of the unprecedented freedoms given to its women. Spartan men fought and bled and died to preserve their city-state's ways and culture, and part of that culture involved giving the Spartan women a degree of freedom that was virtually unheard of in the rest of Greece- but this resulted in their undoing.

We now have roughly two generations' worth of evidence in the West that economic independence for women comes at the expense of men, results in a rapid decline in birth rates in every society in which it is permitted, and causes fertility rates among women to crater as women defer marriage and childbirth into their thirties.

The results of this are bad enough for men. All of you reading this know how miserable the current dating and marriage market place is. You have seen the tattooed, neon-haired, pierced, hacked-off hambeasts that think they are a total catch. You have had to deal with the unbearably bitchy and entitled attitudes of hot young girls in nightclubs and bars who get away with acting like perfect 10s in London and New York City- but would amount to, at best, 8s in Moscow, Kiev, Medellin, or Sao Paolo. You know what it is like trying to handle the entitled attitude of the average Western woman of marriageable age, who knows perfectly well that she can divorce you at any time that she wants and walk away with most of your stuff, your children, and your life.

What we do not always see, as men, is the toll that this takes on women themselves.

Women are more politically and economically free today than at any point in human history- at least, they are in the Western world. They are educated to and in many cases beyond the point of parity with men. They have access to material wealth at levels that their female ancestors could never have imagined. They have full political equality- actually, they have superiority now, given that women can get men fired, fined, and even imprisoned on the most spurious of grounds.

But they are miserable.

The declining fertility of the average Western woman, combined with her ever more ridiculous list of demands for her "ideal" man, has resulted in women turning to truly desperate measures to preserve their rapidly decreasing chances for having children. Not only is this incredibly stupid, given the extremely high rate of failure of egg freezing combined with IVF treatment, but it is also horrendously expensive.

Not only that, but women who wait until their late 30s to have children are doing so in complete defiance of all of the laws of biomechanics. It does not matter how hard a woman tries to get around the laws of nature- the best age for her to get married and have children is still between 20 and 28, because that is the window within which she will have the youth, energy, and drive needed to look after small children.

Furthermore, even the most glamourously beautiful, desirable, and high-achieving women know and realise, at some point in their lives, that their glittering careers and accolades amount to nothing in the end.

Consider the example of Ava Gardner, who was once possibly the most beautiful woman alive:

Ava Gardner was a screen legend. She accomplished things that just about nobody could imagine. But she was also a hot mess.

She believed that it was wrong that men could be promiscuous and have affairs with little impact upon their reputations, but women would be looked upon as whores for doing the same. So she embarked on as many flings, one-night stands, and passionate romances as she could handle.

And what, at the end of her long life of hedonistic pursuits, did she conclude?

'I'm sorry I spent 25 years making films. I wish now I had the things most important to a woman – a good marriage, children, a better education.

'If I ever got married again it would be a re-marriage'.

That is the reality that faces just about any woman over the age of about 35 and is unmarried and childless. Her future is bleak indeed, for she has nothing to look forward to, nothing to build, nothing to pass on to the next generation.


We singles live empty lives of quiet desperation and will die alone. Now Rubio is demanding that we also fund happy families with children who fill their days with joy.
— Ann Coulter (@AnnCoulter) December 15, 2017


The truth of the matter is that nothing we do or accomplish in our lives will ever be more important or worthy than our own children. For the vast majority of women (and men), our career accomplishments, accolades, prizes, and awards will never come close to matching the joy that comes from seeing our children grow into adults and carry on our values into future generations. It is through them that we achieve any kind of real immortality.

As our Supreme Dark Lord (PBUH) has pointed out. women who have accepted the lie of feminism have basically shown no more understanding of time preferences, discipline, common bloody sense, and self-sacrifice than a crack addict choosing to prioritise his next high over getting clean and putting his life back in order.

And while feminism may not be as bad as crack for the individual over ten years, at least not physically, its longer-term effects on a societal scale are far more devastating.

For, while crack kills individuals and groups in small numbers due to overdoses, a society that simply stops reproducing in order to satisfy the misguided wants and desires of its women will suffer an even worse fate: complete and total extinction.

No matter how we look at it, we are forced to confront one very uncomfortable reality: giving women near-complete political, economic, and social freedom has been a disaster, for them, and for us.

Now, I am a man, which means that it is not merely my business to analyse a problem; it is also my job to figure out how to solve it, insofar as possible. Therefore, in the last post of this group, whenever I get around to writing it, I will try to come up with some sensible solutions to the problem, and advise both younger and older men how they can help us all to deal with the consequences of this multi-generational suicide pact that women the world over have entered into.
Email Post
Labels: culture wars demotivationals feminism masculinity philosophy red pill travel