The value of pain 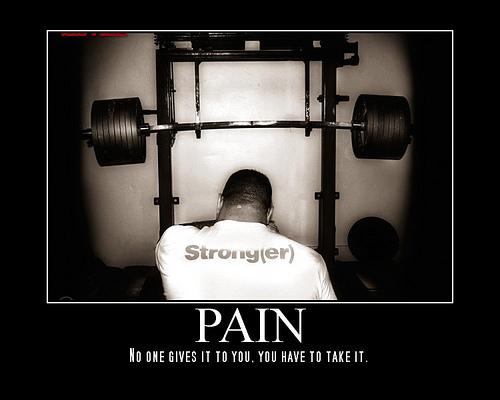 The idea of embracing pain is not a popular one, and with very, very good reason. Pain is shunned by every single living creature, and quite rightly so, because pain indicates that something has gone quite wrong and might potentially interfere with the fundamental urge to survive and reproduce that drives every organism, whether it has a central nervous system or not.

Its instructive potential goes well beyond the usual "if it hurts then stop doing it" concept that even a two-year-old can grasp. If you put your hand on a hot stove, you will burn your hand; the pain transmitted through the seared flesh and nerves will be more than sufficient instruction to your brain, which will tuck that information away in a part of itself called the amygdala. Similarly, if you walk on thin ice over a frozen lake, and the ice cracks and opens up, and you fall through it into the freezing waters underneath, you will remember for the rest of your life that feeling of absolute terror that gripped you in that dreadful moment between life and seemingly certain death.

There is pain that cripples you, that you can do nothing about beyond curling up into a ball and praying to the Lord for the savage waves of agony to stop. This is the pain that you feel when your shinbone snaps in two against another man's knee when he checks your kick. This is the pain that you feel when a hollow-point round penetrates your flesh, fragmenting or flattening on impact, tumbling through your body and shredding muscle and nerve and bone, and taking your life from you as it does.

There is the pain that comes when a knife slips past your defences and into the soft tissue underneath your ribs. There is the shock of cold steel penetrating deep into your vitals, and the freezing dread as you feel your life drain away slowly through wet and clammy fingers.

There is the pain that comes from traumatic, invasive surgery to knit together torn tissue, but which leaves you in agony for days and weeks afterwards. There is pain from the shredded skin of your feet as you limp barefoot through a desert of razor-sharp rocks in desperate search of water and aid. There is the pain that comes just before the quiet release of death, when all men are finally equal in their suffering and their loneliness- for all men, no matter how great or how mean, ultimately die alone, and all men know that one day, we must face the accumulated weight of our deeds, both good and ill, and answer for them.

These kinds of pain are indeed to be avoided, and all sensible men do so as a matter of course.

Yet there are other kinds of pain which can be confronted, which can be carried, and which leave us stronger as a result of facing those trials.

Powerlifters know this kind of pain. They know what it means to finish up a set of squats or deadlifts in which every muscle screams in torment, every nerve burns with fire, and even the very bones within a man cry out for relief.

Yet they face that pain, every single time they step into the squat rack, because they know that if they listen to their bodies, if they rest and recover properly, and if they feed themselves correctly, they can overcome that pain and face another workout.

They do so because the physical pain that they embrace burns away the far greater sense of pain that comes from being fat, weak, and mediocre. They do it to exorcise the demon that haunts them every time they stare into the mirror- of the weak men that they were- so that they may be strong, and in the process, become humble as well.

Martial artists know this kind of pain. They know the shock of bone-on-bone contact. They know what it means to train and fight with bruises up and down their arms, with bone bruises on their shins, with elbows aching and popping from one too many armbars, with bloodied elbows and bleeding knuckles, with battered knees and broken toes. They know what it means to eat a hard punch to the face, to fight with blood pouring out of their noses and onto their shirts, with an eye nearly closed from the swelling and bruising that comes from getting hit at just the right angle and with just the right amount of force.

Yet they embrace this pain. They do so because they know the rewards that come from total dedication to their craft- from embracing the Way of the Warrior, and refusing to let anyone or anything stop them on their quest to be the best.

Elite athletes know this kind of pain. Last year, when Roger Federer played at the Australian Open, he did so after recovering from significant surgery to his knee and while carrying around a lower back problem that he has had since his youth. He was older than just about anyone else in the draw, and he fought several brutally demanding and physical matches to get to the final, where he faced his arch-rival, a man five years younger than him and who had beaten him repeatedly on hard courts. One of those defeats, in 2009 on the very same court on which he played that night, was so terrible that Federer was left weeping and broken in his concession speech, unable to string together a coherent sentence.

Yet he persevered. He shunted aside the pain of weary and overworked muscles. He banished the fatigue that crept in through the long five-set championship match. Down a break at 1-3 in the fifth, he simply refused to let himself be beaten. He stepped up, found an extra gear, started stepping up into his backhands, and moved like a man half his age. And in the end, he achieved a stunning victory over his great rival and friend, and proved once and for all why he is truly the greatest tennis player ever to hold a racquet.

Even pickup artists and players know this kind of pain. Every seducer of women, no matter how accomplished, no matter how many women he has bedded, has met one woman who made all the rest pale by comparison- and that one woman has invariably broken his heart.

The pain that comes from being in love with a woman who cannot or will not return that love is an amazingly and brutally masochistic form of exquisitely effective torture. That kind of pain goes far beyond mere physical affliction. It is a type of mental agony that is so acute and so terrible that it can drive a man to and even beyond the brink of madness. The mental visions that come from thinking of one's beloved naked in the arms of another man are enough to make even the strongest of men lose all control. It is the kind of pain that makes one's head feel as though it will explode, as though all of the demons of Hell itself are having their annual summer barbecue in one's skull.

It is a kind of pain that no man would wish upon any other, for it can drive any man completely insane- and has done so since time immemorial.

Even within that kind of pain, however, there are lessons to be learned.

For all of these kinds of pain make a man stronger. They forge his character. They make him wise and humble, as the man who has embraced these kinds of pain appreciates the pleasures that follow them. He has earned those rewards through his suffering, and by training his wits, body, and will to endure all that life can throw at him, he has become more resilient in the process.

Such a man understands that one day, he will die- alone, and in greater pain than he ever knew up until that point. But instead of fearing death, he accepts it with nobility and composure, knowing that it is not the time or manner of his death that matters. As Abraham Lincoln once said, "in the end, it's not the years in your life that count; it's the life in your years".

One day, every one of us will die. We will be called before our Creator to account for what we have done. If we are very, very fortunate and unusually wise, we will have spent our lives in pursuit of His Truth- and learned some very hard and painful lessons along the way. But pain is merely the price that must be paid to learn the truth.

And until we die, since pain is a harsh and brutal and unrelenting fact of life, it is best that we as men accept it, work around it where possible, avoid physical harm and injury at all times, and understand that it was always the Lord's intention that we be seekers of hard Truth.

One day we will die- for that is the Gift of Men. Until that day- live.

Embrace the pain. Learn from it. Seek Truth, wherever possible. And live.