“The Port Authority is a massive complex…At this point, I see no one exiting the building, so presumably" buses and subways there have now stopped and Port Authority appears to be shut down, @Brook Silva-Braga says. https://t.co/bM1QNc561o pic.twitter.com/B83qQyvGc2
— CBS News (@CBSNews) December 11, 2017

NYPD sources tell @brynnCNN: The man in custody was wearing what looked like a homemade device "that either didn't detonate according to plan or it somehow malfunctioned" https://t.co/rznNcg0e1G
— CNN Newsroom (@CNNnewsroom) December 11, 2017

“The call came in to first responders at 7:19 of an explosion. We now understand it was a pipe bomb. The NYPD tells us so far one person has been injured and one suspect in custody,” @Brook Sliva-Braga reports near the scene in New York City https://t.co/bM1QNc561o pic.twitter.com/PHM7LNV7GW
— CBS News (@CBSNews) December 11, 2017

Pushing commuters back from scene at #explosion in subway at #port authority. One in custody. A few injuries. Live @PIX11News pic.twitter.com/DeB9OZQGZ9
— Kirstin Cole (@kirstincoletv) December 11, 2017

I highlighted the really important bit right there above. As you can see, plainly this bombing was the work of one of those crazy Amish bastards who smoked some bad tabaccy or something over on his farm.

Clearly this country's misguided policy of letting those assholes settle in large parts of Pennsylvania and Ohio and farm organically is backfiring horribly upon us. Who knows what they think about the rest of us as they amble along the roads in those horse-drawn buggies of theirs, dressed up in those weird clothes, delivering milk and corn and so on? Surely they have outright murder in their-

Oh, the chap who did this was Bangladeshi? Not Amish?

You sure about that? The news report didn't misspell the nationality or anything? Let me go check...

Er... Yeah, actually, you're right. Huh. I guess it wasn't the Amish after all.

But what could possibly have inspired a national from a peace-loving and stable culture full of vibrant little brown brothers- and we know that Bangladesh is just full of people who magically transform into Americans the moment that they land on American soil- to go and do such a thing???

I mean, surely there can be no violence in his heart and his religion at all, right?!? Surely it cannot be the case that a follower of The Religion Of Peace acted contrary to the teachings of said great religion, right?!!

What, my friends, could have been his motive to do such a terrible thing? 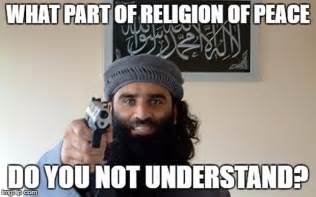 All right, that's about enough, I can only pretend to be a candy-ass liberal for so long before my skin starts to crawl.

Let's be very clear about one thing. The evidence isn't fully in yet, but if- as I suspect- this was another case of an incompetent Islamist suffering from premature detonation in the name of his moon-god and the psychopathic child-molester of a "prophet" that we call Muhammad, then it is simply yet more proof that the God-Emperor and his Administratum are absolutely right to call for a ban on immigration from Muslim-majority nations.

And, regardless of who actually carried out this latest attack- if it is indeed an attack, for again, the evidence is not quite in yet- let us all remember one very basic truth:

America, and the Western world in general, does NOT have a "terrorism" problem. America has an Islam problem.