Our friendly neighbourhood MGTOW- who just reached 100K subscribers on Goolag's YouTube- posted up a video recently pointing out that women need men when men simply decide to say, "screw it", and ghost out of the dating and marriage marketplace:

Fewer truths are more simple, yet accurate and profound, than this one.

And, while such women maintain their youth and beauty, they can get away with it.

That is the power that a woman holds. As I once noted through someone else's words- I forget exactly who it was, unfortunately- women start out wealthy thanks to their looks, and grow poor very quickly. Most men, however, start out dirt-poor (because we lack resources, wealth, and power) and become rich slowly over time.

Put another way, it is a MGTOW/Manosphere truism that men age like fine wine, while women age like milk.

Sooner or later, the insufferable attitudes of modern Western women outstrip their declining looks. And it is at that point that such women are in for a truly terrible shock.

At that point, men will simply refuse to have anything to do with them. The "currency" that such women have to trade is devalued to the point where they cannot "buy" their way out of trouble any longer.

We know this point as "The Wall". And watching a woman smash into it at 100mph or more is, honestly, a terrible thing.

Most, though not all, of that pain and misery could be avoided simply by ensuring that women return to their traditional roles- and that we men return to ours.

One way or another, this will happen.

Either it will happen because women become so utterly disenchanted with the "freedoms" that they have won that they simply give them up entirely. I consider this extremely unlikely, because women have taken those "freedoms" through the ballot box without ever having to pay for their additional "rights" by taking on the responsibilities that we men have always had to bear.

Supported by legions of Beta males and white knights claiming to support the nonsensical notion of "gender equality", they have been given everything they asked for, and more, without ever really having to pay any price.

Or, it will happen because men simply refuse to support such a stupid and brutally unfair system any longer.

This is already happening. Men are already walking away in their thousands and millions from the once-sacred responsibilities of marriage and fatherhood. We can see perfectly well what a colossal risk marriage is these days, and what pathetic rewards it generally holds. We can see that women in most Western nations simply are not worth spending time and money upon- never mind putting a ring on them and turning them into wives who rapidly degenerate into overweight, sexually frigid, materialistic demanding harpies who are never satisfied with what they have.

Already, we can see that marriage rates across the West are collapsing, and "alternative partnership arrangements"- such as "swinging", polyamory, "open marriage", common-law and civil partnerships, and just plain cohabiting partnerships, are replacing traditional monogamous marriage.

Yet it is precisely traditional monogamous marriage that provides one of the most important safeguards to both men and women within Western civilisation. Marriage used to be a powerful bonding trade between a man and a woman. A woman would trade exclusive sexual and reproductive access to a man in exchange for his exclusive provision of resources and protection to her.

Both parties benefited immensely from this arrangement, as did their offspring; human beings have absurdly long development times and we are incredibly helpless for far longer than just about any other species on Earth. That is the price that we pay for our immense brains and our incredible capacity for reason, logic, and innovation.

Let me answer that question by presenting you with a snapshot of a WhatsApp conversation that I had recently with a Russian lady in Moscow. She is a friend of an acquaintance of mine. She will remain nameless for the purpose of this exchange. Nor will I provide any social media handles or other details.

Her Instagram and Facebook accounts are actually public, though, and the exact picture that you see in this screenshot is available on her IG page. So there is no violation of privacy involved in posting this photo.

She sent me the following messages after a bit of banter that we exchanged: 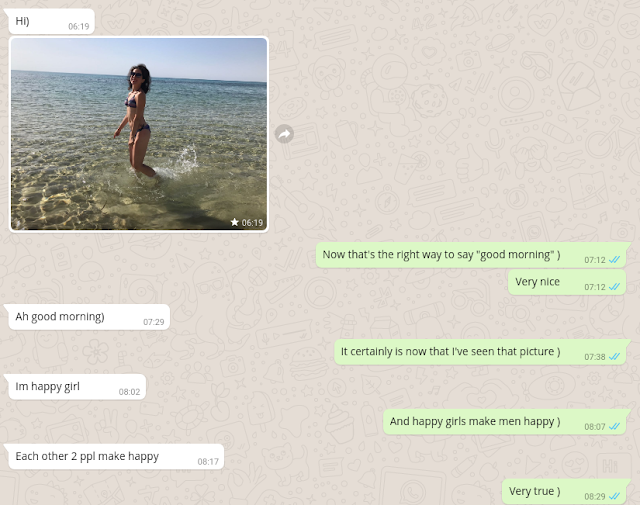 Imagine that. A happy, pretty girl frolicking in the water who wants to share her happiness with a guy that she barely knows and yet can tell is interested in her.

That little exchange up there made for a great start to my morning that day. It wasn't a particularly important conversation, and I will certainly not pretend that my text game is the tightest, and yet there is no doubt that when a girl actually takes the time to ACT LIKE A GIRL, she immediately helps make the world just that little bit better in the process.

In fact, all that the young lady up there did was embrace her feminine energy- just as I embraced my masculine energy. That polarity is critically important for the happiness of both sexes, and we abandon that polarity at our own great peril.

Ladies, stop trying to act like men. You stink at it and you will never succeed in trying to take the same risks and reap the same rewards that we do. You aren't built for it and you aren't going to enjoy trying it, with extremely rare exceptions- and that's assuming you don't succumb to Curie-Hultgreen Syndrome and get yourself killed in the process.

Start acting like ladies again. Embrace your feminine energy. Be young, be pretty, be sweet and good-tempered, and save your time and attentions for a good man who is worthy of them, and the good life that you seek will very likely follow in due course.

Gentlemen, embrace your masculine desires to create, build, conquer, and destroy. This is not only healthy and just, it is necessary in order for you to achieve your maximum potential. Do not let this diseased and broken society hold you back. Seek out challenges and risks in your life. Do not be afraid to fail. Do not be afraid of hardship or sacrifice, for these things will forge you into a stronger man as fine steel is forged in a furnace and tempered between the hammer and anvil of Fate.

Both sexes must embrace our polarity. The more we do so, the better off each becomes. Our very different natures are to be enjoyed, not feared.
Email Post
Labels: culture wars demotivationals fat girl jihad feminism masculinity philosophy red pill SEXISS