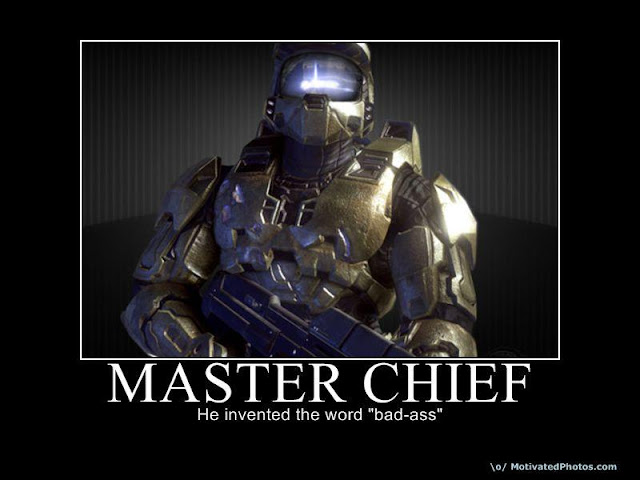 Those wonderfully mad Russians have evidently decided that my beloved HALO saga is, in fact, a long-running documentary somehow sent backwards through some kind of wormhole to the present day. That would explain why they have basically developed their own version of the MJOLNIR powered armour for their own soldiers:

It might resemble something out of Star Wars [HALO, DAMMIT!!! Get it right!], but this is the prototype for a combat suit that Russia hopes will give its soldiers the edge on the battlefields of the future.

The high-tech suit includes an exo-skeleton, designed to boost strength and stamina, body armor and even a watch capable of surviving a nuclear blast.

The all-black kit also has a Stormtrooper-style helmet with a tinted glass visor and a mini task light poking out of the side.

Earlier this month, Commander-in-Chief of the Russian Ground Forces Col. Gen. Oleg Salyukov said in an interview 'We are completing the scientific research on creating the future layout of the Ratnik-3 combat gear.

'The implementation of the project will allow to increase the performance of a soldier by 1.5 times in completing various tasks,' he said in the interview with the Krasnaya Zvezda paper.

According to Salyukov, the total weight of the gear will be reduced by 30%.

It is designed to be used round-the-clock in all weather conditions.

This is what the latest exercise in Russian-style awesomesauce looks like: I have to admit, it's an impressive-looking piece of kit. However, as far as I can tell, this is not actually powered armour. That is what we really need in order to get one step closer to realising the dream of Robert A. Heinlein's original mobile infantry.

Now, this is just my personal opinion- and of course, being the one and only Didact, my opinions are facts- but the HALO saga took the concept of powered infantry armour to its most impressive logical conclusion with the MJOLNIR suits of the Spartans. Those things are just plain badass.

The fact that the games (mostly) concentrate on the experience of walking around in one of them as a 7-foot-tall cybernetically and genetically enhanced murder machine armed with everything from assault rifles to rocket launchers to FREAKIN' LASERS just makes the idea that much more appealing.

Actually, this is all nothing new. Most Tier 1 and Tier 2 militaries around the world have been moving toward some kind of powered armour for years, if not decades. The TALOS system in the US, and its predecessors, the HULC and XOS experimental powered exoskeletons, are but the latest in a long string of such ideas.

Sooner or later we will figure out how to put a man into a powered assault suit that will shrug off kinetic impacts and double, triple, or quadruple the lifting capacity of its wearers. That day is probably a long way off- but it's not that far away.

Remember, it wasn't all that long ago that most of us would scoff at the very notion of artificial intelligence, robotics, and automation making both blue-collar and white-collar workers largely redundant across many industries- but that day is here right now.

Eventually technology will catch up with human creativity. It's just a matter of when.

And also, of course, as to whether the civilisation that made such innovations possible hasn't simply collapsed because it refused to breed or cucked and pozzed itself so thoroughly that it was swept aside by another, lower-tech, but far more masculine and headstrong civilisation.