A little metal never hurt nobody

Well... if you really want to be pedantic, I suppose that getting hit by a wrecking ball or being pinned under heavy steel girders would put paid to that notion in an awfully big hurry. Of course, that's not what I call "a little metal"...

But I'm talking about heavy metal music, which as we all know is very good for you- and now comes with the added bonus that the libtard Left immediately labels you as a shitlord and calls you RACISS!!! if you listen to it.

(Hey, we all knew they were idiots already. It's not our fault that they insist on proving the point to, and beyond, all reasonable limits.)

Indeed, the only bad thing about a little bit of metal might be the herniated discs in your neck caused by excessive headbanging. Fortunately, there is always spinal surgery for that sort of thing. Take the good with the bad, eh?

So here is a brief rundown of the sort of heaviness that I've been listening to of late:

Apex by UNLEASH THE ARCHERS is a very strong candidate for Album of the Year, in my opinion. It is amazing. There is not one weak track on the entire thing, from start to finish.


Like I said, the whole album is brilliant, but if I had to pick a single favourite track, I'd be stuck in a toss-up between this:

IRON SAVIOR used to be one of my favourite bands when I was in high school. Their "Atlantean Saga" (or whatever they called it) was a set of 4 albums from the late 90s and early 2000s that all revolved around a central concept of a sentient space battle station created by a super-advanced race of Atlanteans which... ah, hell, just go listen to their work.

They sort of lost the plot after Condition Red, though, and they've never been as good since then. But they did a phenomenal cover of that old SEAL song, "Crazy", which I really dig:

And then of course there is their Star Trek tribute song, which is better than the ENTIRE Trek franchise:

For those of you more inclined toward neck-snapping thrash metal, I present to you the almighty TESTAMENT:

Now, if we're going to talk about really good thrash, we cannot have that conversation without bringing up and discussing KREATOR's latest album, Gods of Violence. It's a damn good album but it suffers from the exact same flat production that every single one of their albums has had since, well, Violent Revolution.

And it's not like they haven't had good producers. Andy Sneap and Jens Bogren are no slouches, they've both produced amazing albums in the past. But for some reason every KREATOR record in recent memory, except maybe Hordes of Chaos, sounds really flat.

Anyway, this is one of my favourite tracks from Gods of Violence:

And here's a classic track off my absolute favourite CHILDREN OF BODOM album:

I'm not a fan of IN FLAMES anymore. I haven't been since, well, Come Clarity. They pretty much completely abandoned their old style and sound after that album and they've never sounded as good or as fresh since. But there are a couple of great songs from their "middle period" that I listen to whenever I need to vent some rage:

Their first four albums were, and remain, required listening for any fan of melodic death metal. Reroute to Remain is where it all started going off the rails. Soundtrack to Your Escape was sort of s hybrid effort, Come Clarity was a decent but flawed compromise between styles, and then it all just went south from there.

Now, thrash and melodic death are all very well when you just need to get the sin of wrath out of your system. But what if you're just looking for some goofy fun?

That, my friends, is why SABATON exists:

And now for something somewhat more epic- like, say, STAR ONE:

That band was one of the main brain children of AYREON maestro Arjen Lucassen, and their first album (of two- it's just a project, really), Space Metal, is to my mind one of the greatest prog-metal albums ever recorded. Hell, it's been one of my favourite albums for damn near 20 years.

And that "Hawkwind Medley" is, hilariously, better than the ENTIRE HAWKWIND back catalogue.

Now here's a bit of MASTERPLAN, with Jorn Lande singing one of their best ever tracks:

This sounds suspiciously similar to an old HELLOWEEN song called:

Which is completely unsurprising once you remember that Roland Grapow and Uli Kusch, the guitarist and drummer for MASTERPLAN at the time, used to be in HELLOWEEN back in the 90s.

For some reason longtime HELLOWEEN fans completely shat the bed when they issued that Unarmed album for their 25th anniversary, but I have to say, I loved it. Every great old-school metal band needs to be able to laugh and have some fun once in a while, and the Pumpkins know exactly how to do that, in spades.

And now, as we close out, where would any decent survey of heavy metal be without some good old-school IRON MAIDEN?! 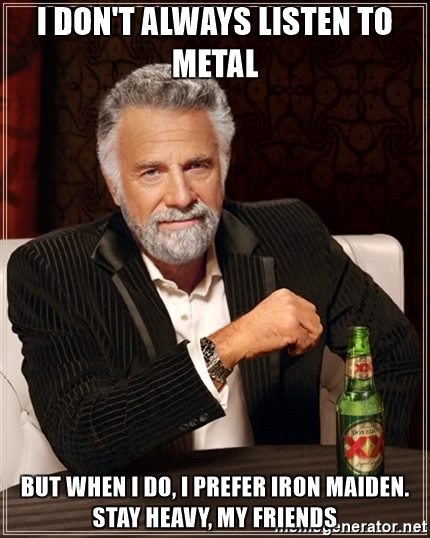