Querying the Domain: Have you met my chainsaw bayonet? 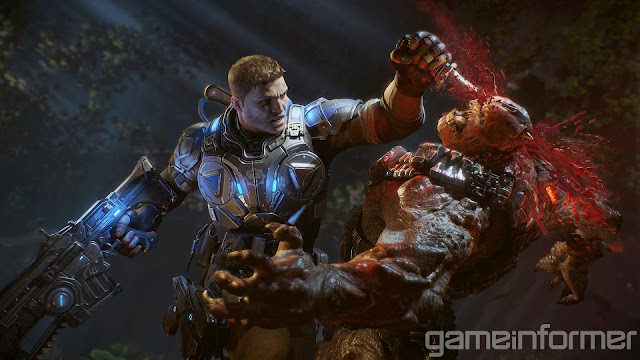 Kapios had a question for me from my post about MANOWAR from last week:

Yo are you doing any cool video game reviews lately? I just stumbled into a gut wrenching song from 'DOOM' game and even though I'm not a heavy metal guy it sounded very satisfying. Also any recap on The Grand Tour? The politics and all of that is starting to wear on me lately and this blog is a bit refreshing with the variety of posts.

Back at the very beginning of November 2016, I wrote a post asking whether the latest installment in the legendary Gears of War franchise was actually any good. My reasons for asking the question were pretty straightforward. I had, by that point in time, played through the campaigns of ALL of the GoW games and I had found that the franchise had really hit its high point in Gears 3- but had also basically wrapped up whatever story there was to the Gearverse by the end of it.

And as I had written in my Reaxxion article on the subject a year earlier, I simply couldn't see the point of yet another Gears game in 2016, not after everything that had come before it.

Well, recently I finally got around to actually going out and buying some new games, and one of them happened to be Gears of War 4. I finished playing it the other day and had at some point intended to answer my own question. Kapios's timely reminder simply provides an opportunity to do exactly that.

As a matter of fact, it is.

Something Old, Something New...

The new Gears game does a very good job of taking the core dynamics of Gears 3- the best game in the series, in my personal and not even slightly humble opinion- and building on them. All of the things that we expect from any Gears game is present and accounted for.

Unrealistically badass women with short hair, serious attitude, and every bit as much ability to absorb damage as men? Check.

The classic ridiculous movement system that NEVER does what you want it to, when you want to? Check.

Awesome destructible-cover system that at least sort of realistically attempts to humanise the brutality of the combat and makes it clear that you can't just slaughter your enemies at will? Check.

Ugly-as-sin NPC opponents that annoy the crap out of you, make horrible noises, prove to be absurdly difficult to kill, and insist on turning you into a gory pool of blood and entrails at every possible opportunity? Check.

Weapons that combine superbly realistic functionality with completely unrealistic attachments like chainsaw bayonets, and the ability to somehow fire thousands upon thousands of rounds without ever having the barrels melt? Check.

Grinding nihilism, extreme brutality, and no sense of real hope or victory even after winning through the toughest possible boss battles? Check, check, and triple-mother-humpin'-check!

(Yeah, I know, my use of profanity is pretty limp-wristed. That is for two reasons. First, I have never been a sailor or a drill-sergeant- to my knowledge, anyway. Second, this IS still, sort of, a family-friendly site, up to a point. The fact that this "point" hangs about as high off the ground as a badger's badger, is somewhat ancillary.)

So Gears 4 has certainly taken everything that made the previous games so good, and so infuriating.

You still die randomly for no good reason whatsoever. Hardcore mode is still extremely irritating. The enemy AI is still tough, brutal, and disciplined- yet predictable to at least some degree. And the gameplay is still thrilling and addictive.

The new Gears game even preserves the one massive flaw of all previous games in the series: in the one vehicle-based segment, the bike you use is nearly undriveable.

I don't know what it is about the Gears franchise, but I have never found a single one of the games to be good at the vehicle- or creature-based stuff. It doesn't matter whether you're driving a Junker, a Centaur, a Brumak, or a bike- the controls are clumsy and stupid, and it's impossible to manoeuvre whatever you're driving properly. Somehow, the thing that my beloved HALO franchise does so brilliantly- namely, vehicle-based third-person combat- is something that the Gears franchise is completely useless at doing.

When I judge a game, I look at its gameplay first, its plot second, and its characters third. When it comes to the plot, GoW4 is solid but unspectacular.

Essentially, a lot of stuff happened between the end of the last game and the start of the new one, Marcus Fenix and Anya Stroud got busy and produced a boy by the name of James Dominic, and then he went and joined the Coalition of Organised Governments and became a Gear and then ran away and some other stuff happened that nobody cares about and why waste time on a plot when you can just KILL A WHOLE BUNCH OF UGLY-ASS ENEMIES AND TURN THEM INTO STEAMING PILES OF BLOOD AND SHIT?!

That, I think, is a pretty fair summary of the entire franchise's attitude to this strange and bizarre concept of "plot" in gaming.

A Worthy, if Somewhat Pointless, Successor

Overall, GoW4 was not, in my opinion, a particularly necessary game. It's not a bad game, don't get me wrong. It sure as hell beats the pants off Destiny and even comes close to committing the ultimate heresey: it's ALMOST better than HALO 5: Guardians.

(Yeah. I just wrote that. Me, the freakin' DIDACT. I must be getting senile in my old age.)

Note, I wrote ALMOST. Not as good. But almost.

Considering that these days I think that H5 is the weakest game in the HALO franchise by some ways- weaker even than HALO: Wars and HALO 2, that tells you that GoW4 is pretty good, but not what I would consider a brilliant or mind-blowing game.

A lot of gaming magazines have given the new game ratings like 9.5/10 or higher, but we know just how corrupt and partisan most of the established gaming media really is, so their opinions can largely be ignored. The fact is that the new game just isn't as groundbreaking as it could have- and in my opinion should have- been.

You see, my original assertion that this game simply wasn't really needed, has been proven correct.

The creators couldn't really come up with a great new enemy, because after the ending of Gears 3, there really wasn't one. So they took the old Locust and Lambent enemies from that game, slapped on a fresh coat of paint, got rid of the Lambent's extremely annoying tendency to ASSPLODE when they die, and created a couple of new enemy AI classes.

They did a good job, certainly. But then they just brought the old dead Locust back as Scions, and the new Locust as the Swarm, with approximately the same tactics and the same resistance to damage and so on.

The new environmental effects, such as the windflares, are a great new touch that add unpredictability and challenges to what is otherwise a pretty by-the-numbers TPS game. It's certainly not a bad game- I'd go so far as to rate it an 8.5/10. But ultimately, it's the kind of game that I would play once, and never again, unless I'm seriously bored.

I'll still look forward to the next Gears game. I still loved playing it and had a lot of fun doing it- even though the gameplay could be quite frustrating at times, and the movement system was sometimes beyond stupid.

But, honestly, I'm not convinced that any more of these games are strictly necessary.
Email Post
Labels: games reviews