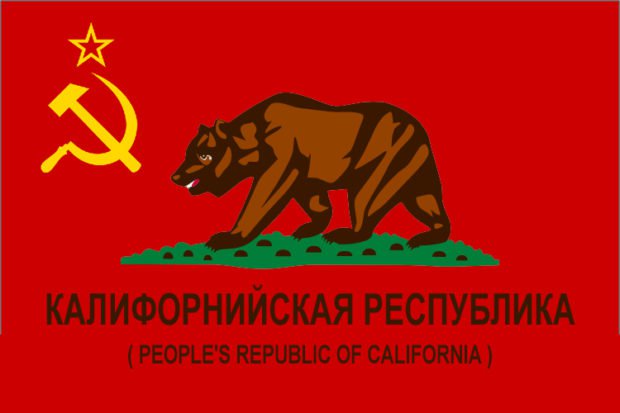 Leftists of an overly literal nature are advised to lookup the definition of "satire" before proceeding. I've got a copy of the Oxford English Dictionary handy if you want to borrow it. Just kindly return it in the state you found it- I do NOT want filthy hippy fingerprints all over the pages.

It would appear that roughly a third of Californians want to secede from the rest of the United States of America:

A new Reuters/Ipsos poll shows that 32% of Californians back “Calexit” — the movement to secede from the Union and form an independent country.

The 32 percent support rate is sharply higher than the last time the poll asked Californians about secession, in 2014, when one-in-five or 20 percent favored it around the time Scotland held its independence referendum and voted to remain in the United Kingdom.

California also far surpasses the national average favoring secession, which stood at 22 percent, down from 24 percent in 2014.

The poll surveyed 500 Californians among more than 14,000 adults nationwide from Dec. 6 to Jan. 19 and has a credibility interval, a measure of accuracy, of one percentage point nationally and five percentage points in California.

The secession movement has been boosted by consternation with the surprising election of Donald Trump as the 45th President of the United States. California voters overwhelmingly favored the Democrat favorite, former Secretary of State Hillary Clinton. The Golden State is entirely responsible for Clinton’s victory in the popular vote nationwide.

California Democrats have openly acknowledged the movement to secede, though mostly to discourage it. Kevin de Léon (D-Los Angeles), who leads the California State Senate, told legislators at the start of the new session: “Many Californians – some tongue-in-cheek, some hand-to-heart – have advocated withdrawal. But, in America, no state ever succeeds by seceding.”

While much of the rest of the country might be happy to see California go, the state would probably face constitutional obstacles to secession. The Supreme Court held in Texas v. White (1869) that states could not secede unilaterally.

I dunno about the rest of y'all, but as far as I'm concerned, if the Commies on the Left Coast want to secede... why the hell not?!

Indeed, all I can say to that is: what's stopping you loonies on the from doing exactly what you so fondly wish for, then?

I am reminded, of course, of LTC Kratman's really rather excellent Thanksgiving prayer from last year, in which the Grand Strategikon of our little Evil Legion of Evil said:

We could in our vanity and arrogance ask for more, O Lord, that the four most left-leaning members of the Supreme Court go down in the same fiery plane crash, that California secede so that we can recognize it, mobilize against it, invade it, conquer it, crush it, and then restructure as a territory sin suffragio en perpetua, but that would be terribly presumptuous of us.

Besides, that’s what Christmas is for.

I've never visited California, personally. I'd like to go someday but I really, REALLY hate flying domestically within the United States. (I had thought that international air travel was miserable. Then I tried flying within the US on Continental and United. Boy was that a shock.)

I hear California is really quite pretty, once you get out of Los Angeles and San Francisco. San Diego is supposedly, from what I've heard, one of the saner cities- because it's the main port for the entire US Pacific Fleet, and because USMC Camp Pendleton is right next door (by American standards, at least).

There are also some nice vineyards out there- again, so I've heard, I only really drink Aussie wines myself- and I hear that the Pacific Coast Highway is perfect for driving along in a proper convertible American muscle car with the top down on a sunny day.

Unfortunately, almost ALL of the charms of the once-Golden State appear to be completely offset by the fact that, out of all of the loony left-wing states in the Union, this one has to be the looniest, by far.

This was the state that was once governed by none other than President BAMF himself, Ronald Wilson Reagan*. It went from that, to the liberal wasteland it is today- with one of the most anti-business, anti-freedom, dyscivic political atmospheres in the entire Western world.

I cannot be sure how most Americans feel about the state, but I suspect that if most of at least Southern California were to disappear into the sea tomorrow, the rest of the country would be rather chuffed to bits. That is largely conjecture on my part, of course, but judging by how fast the country is tearing itself apart along socioeconomic, racial, and political lines, I think it close to the truth.

There are, undoubtedly, good, sensible, decent people all over California who just want to be left alone to live their lives. To them, I say: get the hell out and go to less hostile states. Just remember not to vote in such a way that you end up turning Colorado and Arizona and Texas back into the liberal wasteland you just left. (Not, of course, that anyone is going to actually listen to that advice.)

Unfortunately those folk are quite outnumbered by the nutters.

Jokes aside, I do actually have a theory about that. And it can be summed up in one word: "cowardice".

You remember how, back when the God-Emperor was locked in his Great Crusade and was facing down the Dark Eldar wytch queen, the foul and dreadful Hilldebeast, a whole bunch of Hollywood luvvies**, quite a host of them in fact, issued forth passionate declarations from frothing, spittle-flecked lips about how they would immediately move to Canada the day that Donald Trump won the election?

And do you remember how, come November 9th, not a single one of them actually packed up and moved?

They didn't carry out their threats because they were cowards.

They didn't truly believe that The Donald could win- and when it became plain that they, and pretty much everyone else who thought like them, were horribly wrong, they simply threw a colossal temper tantrum instead of sitting back, analysing their mistakes, and accepting that they were wrong.

Nor did they have the courage of their convictions- because that would require them to actually keep their word. This is, I suspect, colossally difficult for actors and musicians to do- after all, these are people who are paid not exactly small sums of money by their fans to put on a front, a show, a facade, for the rest of us to enjoy as entertainment.

Ultimately, the people of California are not going to carry out their threat either- even though the actual breakup of the heterogeneous United States of America into homogeneous, racially and socioeconomically divided individual polities is guaranteed at this point. They know full well that they are better off in the United States than out of it- even though the rest of the country might very well be better off with the latter outcome.

(Some might complain that we would no longer have Californian Merlot and Cabernet to, er, "enjoy" in such a situation; I am not one of them, be it noted.)

The people of California- I should say, more precisely and far more charitably, the liberals of California- will not secede (sadly) because to do so would be to give up their power over the rest of us. And if there is one thing that cowards cannot abide, it is to surrender what little power they do have to make the lives of others miserable.

More's the pity, really. I have to admit, I was at least somewhat looking forward to seeing SecDef James "Mad Dog" Mattis ordering the Army, Navy, and Marine resources currently stationed in the State to mobilise and bring the leftmost state in the Union to heel...

*There are, by the way, several dirty little secrets from President Reagan's time as governor- such as the fact that he signed into law a huge tax hike, the legalisation of abortion in the state, and was the first Governor to permit no-fault divorce in the Union. My immense personal reverence for The Gipper aside, the fact remains that he was not always the rock-ribbed conservative hero that Republicans remember him to be.

**This is the English slang used to refer to the right-on leftoid celebrity elite that is so intensely irritating on both sides of The Pond. (And "The Pond" is known to you as "The Atlantic Ocean". Do try to keep up with the English vernacular, I know it's not a language you Americans speak, but still...)
Email Post
Labels: douchebaggery liberal stupidity office space politics Trump Warhammer40K