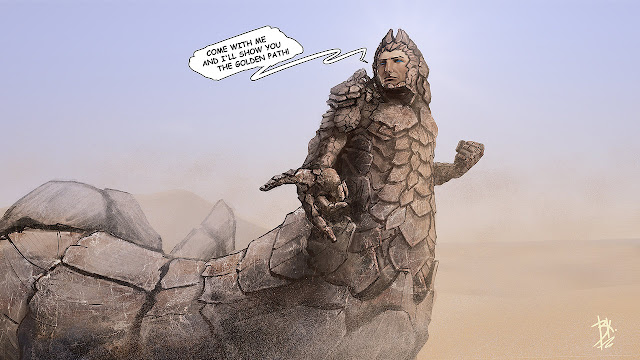 It's all over bar the shouting now, apparently- The Donald is in fact going to be the Republican nominee for POTUS:

Triumphant Donald Trump claimed victory in the Republican presidential contest on Tuesday night, after Ted Cruz dropped out of the race following his defeat in the Indiana primary.

The billionaire, now virtually assured of being the GOP's standard-bearer in November, called the Texas senator 'a tough, smart competitor' during a 20-minute victory speech.

Casting himself as a lifelong fighter in the bruising world of New York real estate, Trump said he had met 'some of the most incredible competitors that I have ever competed against, right here, in the Republican Party.'

'We're going after Hillary Clinton,' he said, looking ahead to what will be an expensive and protracted fall.

He said Cruz was among a group of his former competitors – including endorsers Chris Christie and Ben Carson – whom he hoped would remain engaged in the party, even as they licked their wounds from a vicious season of insults and attack ads.

I have to admit, I am very much looking forward to watching Mr. Trump take on Vampira- uh, I mean, Hillary Rodham Clinton. And it's not just because of the entertainment factor involved in watching a reality TV star, real estate salesman, and relentless self-promoter take on a sociopath, liar, and very likely career criminal on a national stage.

It is because that contest will be a spectacularly public test of socio-sexual dynamics on a national and even a worldwide stage.

My prediction is this: if you put an unquestionably alpha-male candidate who revels in his own masculinity up on a stage with a woman who is as morally questionable, as deeply lacking in ethics and integrity and character, as utterly dislikeable and, frankly, outright terrifying as Mrs. Clinton, SHE. WILL. LOSE.

She won't just lose, actually. She will be HUMILIATED.

I could very well be wrong, of course. It could be that Mr. Trump will be unable to convince women, blacks, and Hispanics of his virtues and skills as a possible President. But I seriously doubt this. His electoral success thus far has been a product of skill, tenacity, self-promotion, and a knack for being in the right place saying exactly the right things at precisely the right time. I do not see these traits going away anytime soon.

While we are on the subject of Mr. Trump, one may very well ask why someone like me could possibly look favourably upon the prospect of a President Trump.

After all, he has stated clearly that he intends to renegotiate any trade deal that is not in America's interests. He seeks to restrict and even stop the flow of immigration into this country. He wants to make it far more difficult for skilled workers like me to come here and work.

To which I respond: I support Donald Trump because, like him, I want to see America become great once again.

Like him, I am a nationalist. I believe in tribes, in people, in cultures. I do not believe that if you simply pick a man up from Africa or India or Outer Mongolia and drop him into Spokane or Tuscaloosa or Plano or Coon Rapids or Albany, that he will magically become American in the process. This nonsensical notion of "America as an idea" holds no water for me- this, from someone who regards the Declaration and the Constitution as basically Holy Writ.

I love this country. But I am also a guest here, obliged, and willing, to live by its laws and its principles. My fellow foreigners who have come here expecting to bring with them their own prejudices, their own ways of life, their own cultures, to be left alone to carry on as their ancestors had done in their homelands while being supported by the American people in their endeavours, are hypocrites beyond measure.

As foreigners, it is our duty to recognise that we are guests, and that if we wish to settle down here and become citizens, we must EARN that privilege. Under no circumstances should the immense privilege of American citizenship simply be granted to Mexican or Guatemalan families just because they happened to cross a border (often illegally) and invaded sovereign American soil. Such people should be treated as precisely what they are: invaders, usurpers, criminals.

We would not tolerate such behaviour in our countries of origin. Why then do we expect Americans to not only tolerate it, but promote it, accept it, and even celebrate it?

Is Mr. Trump a perfect candidate for President? Good Lord, no. He is certainly no Ronald Reagan; he is at best a very orange imitation of the legendary man who became the greatest President of the 20th Century.

Is he a good candidate? Almost certainly not.

Is he good enough?

He is good enough simply because he was and is the ONLY candidate for POTUS that bothered to address the only questions that actually matter anymore: immigration, national identity, the primacy of the individual over the state and the nation over the globalist elite, and the ongoing erosion of freedom and sovereignty that comes with adopting a globalist agenda.

We must not forget that great English and American conservatives of the past, from Edmund Burke to Russell Kirk and, of course, President Reagan himself, did not hesitate to point out that it is people, not theories, that determine the fates of nations. A strong, confident people that believes in its own culture and that is willing to defend that culture against any aggression is the only real bulwark against tyranny and oppression that can be trusted to work.

A sick, weak, degenerate people unable to identify their own culture, or take pride in the same, is a people waiting for a conqueror to enslave them.

Mr. Trump now has a chance to show his people, and the world, his idea of the "Golden Path". I only hope that his Secher Nbiw involves rather less of "a lesson that humanity will remember in their very bones" than the God-Emperor Leto II's did, and I hope for Mr. Trump's sake that he does not intend to turn himself into the "ultimate predator" as Leto did.

But I, for one, will very much look forward to the day when we see Mr. Trump raise his right hand to recite the Oath of Office of the President of the United States of America.