"So please remember us"

"Never the lotus closes, never the wild-fowl wake,
But a soul goes out on the East Wind that died for England's sake --
Man or woman or suckling, mother or bride or maid --
Because on the bones of the English the English Flag is stayed.

"The desert-dust hath dimmed it, the flying wild-ass knows,
The scared white leopard winds it across the taintless snows.
What is the Flag of England? Ye have but my sun to dare,
Ye have but my sands to travel. Go forth, for it is there!"
-- From "The English Flag" by Rudyard Kipling

Around where I live, there is a footpath that tracks all along the coastline, where the river meets the open Atlantic sea. On warm and lazy summer evenings, there are few things that I love better than to to slip on a pair of decidedly weird-looking shoes, and walk along that path while enjoying the cool breeze, the light of the setting sun, and the majestic beauty of the New England coastline.

About ten minutes up that path from where I am, there is a small public park that sits right on a promontory in the Hudson bay. It is a favourite picnic spot for the families that live in the area, situated as it is opposite a marina and yacht club, and right at the footsteps of some very nice residential apartment complexes.

And right next to that public park is a Korean War memorial- a tribute to "those who ventured into the howling dark, and did not return". 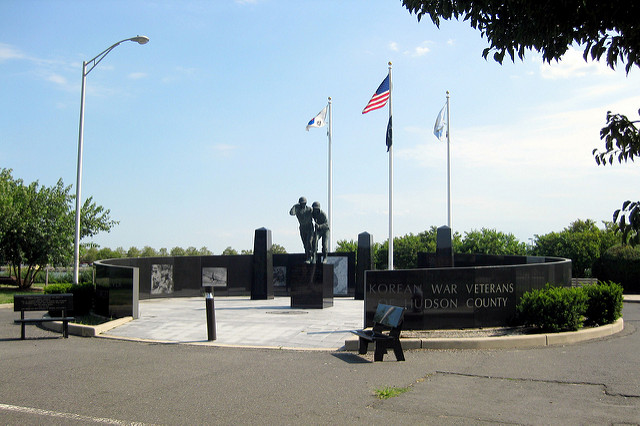 Upon that monument is inscribed a poem that captures perfectly the horrors of war, and the mark that it left upon the souls of the men who fought through the "Forgotten War":

Every time I walk past that memorial, the reality of the freedoms that the residents of this most special place enjoy, is brought crashing home.

To visitors, this strangely American obsession with flag-waving, with parades, with "remembering the fallen" is often viewed as an odd affectation, one of those mildly amusing cultural quirks that makes Americans distinct from, oh, say, Swedes or Germans. It seems trite and silly; this patriotic nonsense seems parochial in the extreme to some of our "betters" from across the sea, to whom war, hardship, sacrifice, and death in service to God, country, and family are ephemeral and abstract concepts bred out of them by long decades of peace. (A peace bought and paid for in American blood and American dollars, let it be noted.)

But I view that trait as one of the most admirable and decent qualities of a good and moral people.

And it is there, within that circle of black marble, surrounded by the names of ordinary men who fought and bled and died in a war that they probably hardly understood, that I always come to realise just how profoundly grateful I am for the respect in which the American soldier is held.

It is there that I see what their sacrifice bought Americans, and those foreigners- like me- who are lucky enough to live here by the grace and generosity of a good and decent people.

I was walking past that very spot yesterday. The setting sun was at my back; the cool evening breeze blew through my hair. On my right, in the marina, free and happy people took their boats out into the bay to enjoy a gentle cruise on the sea. In the pavilion of the yacht club, free and happy members were sitting around drinking cocktails and enjoying an early evening barbecque. On my left, free and happy children shrieked and ran and roughhoused and tumbled, while their bemused parents did their level best to stop them from running into each other and into fence-posts (as children are of course wont to do). Ahead of me, a group of young men about my age were playing volleyball as their girlfriends and wives sat on the grass and gossiped (as women are of course wont to do).

And in the middle of all of that joy of life well lived, there stood a silent memorial of black marble and white lettering, with a statue of a soldier half-carrying his wounded mate to safety, standing silent watch over the very people who now enjoy the fruits of their sacrifices.

That scene is what those men fought and died for. All they ask in return is that we remember them- as simple and as respectful a request as a soldier can make to those who sent him to war.

Most Americans have never known what it means to live in a country where the simple ability to sit in a public park with your family is fraught with danger because security is not guaranteed. Most Americans cannot imagine having their right to walk wherever they damn well please being restricted, because certain areas are not "safe" to wander into. Most Americans take it for granted that they can sit in a marina without metal detectors, without heavily armed private security, without having to worry about some Islamist loony wanting to blow himself up and take dozens and hundreds of them with him on his way to his so-called "paradise".

I pray to the Living God every day that you people will never have to learn what that is like.

I have lived through the fall of a government. I have seen what happens when a country tears itself apart through economic and political instability. I have seen mobs being fired upon by soldiers who took it upon themselves to mete out "justice", such as it was, at the point of a gun. And I have seen what happens when, in desperation, a nation turns to the army to restore stability and sanity- and how rare it is for a general to renounce the reins of power in deference to civilian authority.

I never want to see that come to America's shores. The one thing that lets me think that such a day is a long way off is, of course, my knowledge of the American soldier.

Shortly after the Revolutionary War was won, a petition was circulated among the officers of the old Continental Army demanding that Congress restore back-pay that had never been distributed to General Washington's veterans. There were mutterings about leading a revolt against Congress itself, for the veterans had been hard done by and (justly) felt that Congress had become blind to their suffering.

General Washington stood up in front of his veterans, fumbled his opening remarks, put on a pair of spectacles, and commented that, in service to the new nation, he had not only grown grey but blind as well.

He then went on to denounce the petition as treason against the nation that he and his men had sacrificed so much to build- against all odds, against the greatest Army and Navy the world had ever seen, with at times only Divine Providence itself to help them.

His veterans, suitably chastised by the Father of the Nation, disbanded. Once again, George Washington had saved his country, and the concept upon which it was founded: the Rights of Englishmen to live free of tyranny, free of hereditary monarchy, free of fear that the Army would be turned against them.

That trust that the average American has in the American soldier is, believe it or not, shared by non-Americans as well. I don't care how many examples you show me of protesters burning American Presidents in effigy on the streets of capitals around the world. When things go pear-shaped due to an earthquake, a flood, a volcanic eruption, or a man-made disaster like a collapsing government taking a nation down with it in its death-throes, the first thing that every citizen of those afflicted lands wants to see is an American Marine or sailor or infantryman, handing out aid packets and water and food.

You can break trust in America, easily enough. Lord knows, your politicians do enough to break that trust on a daily basis. But damn near nothing breaks the trust that people have in the American soldier.

And that is because, like those men whose names are inscribed in the black marble of that beautiful memorial, those soldiers do not ask for much. They only ask: "so please - remember us".

Freedom is never more than one generation away from extinction. We didn't pass it to our children in the bloodstream. It must be fought for, protected, and handed on for them to do the same, or one day we will spend our sunset years telling our children and our children's children what it was once like in the United States where men were free.