In the words of the Prophet Ringo... 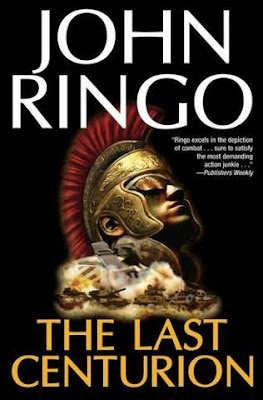 Back in 2009, a certain madcap genius wrote and published a certain book which, if you read it today, makes it seem like the author had one hell of a powerful crystal ball sitting in his living room.

The funny thing is, when I first read the book, I have to admit that I didn't actually think all that much of it. I found the narrative style very disjointed; John Ringo wrote it very much "blog-style", so the story jumped all over the place and embraced many different ideas at a truly bewildering pace. The combat sequences were hard to understand because of the way he was writing them- short on details but very long on action. And it was obvious that there was a clear political axe to grind.

Of course, back then, I was somewhat less... grumpy than I am right now. And since that time, I have read and re-read this one book so many times that I think the only book I've ever re-read more is probably Starship Troopers.

As it turns out, The Last Centurion is packed with wisdom and John Ringo's signature batshit-insane sense of humour. It is, quite simply, a phenomenal book.

However, in this particular election cycle, its real value lies in its incredible predictive power.

Remember that, back when John Ringo wrote this book, the country was in the grips of a massive economic depression- I lived through those days watching the markets move down, down, and down some more as Barack Obama's dope-and-change shtick really started to kick in. Those were dark, terrible days- not that these are necessarily any better, mind you- and it was amid that atmosphere that Mr. Ringo crafted one of his finest ever standalone novels.

Reading it today, though, you have to wonder why the hell he didn't simply quit writing and start up his own hedge fund. He'd have made a goddamn killing.

In the book, Mr. Ringo writes about:
Look back upon what he wrote and you will realise that he was absolutely right in almost every single department.

Have you noticed, for instance, that the weather has been really screwy this year? Ever wondered why that is? Hint: your SUV is not responsible for the weather, for murdering polar bears, or for shrinking polar ice caps. In reality, we are still in the middle of a major downturn in Solar activity, that is causing weather and climate to go out of whack all over the world.

Did you see how Europe is now collapsing under the weight of unchecked immigration and multicultural insanity? Did you notice how that same insanity has made its way to the US of A, where the very concept of the "United States" of America is now nothing more than a pleasant and bygone fiction?

Oh, and while we're at it- seems as though a certain Hillary Rodham Clinton, who was directly, deliberately, and thoroughly caricatured in the book, has somehow managed to achieve the impossible and made the fictional President Warrick look like a moderate.

Seriously. How abominable a Presidential candidate do you have to be in order to make the Bitch look sane by comparison?!?

This book is packed with an incredible number of ideas, and it's simply not possible to go into each and every one. Nor is this meant to be a book review; I simply wished to point out how closely and strangely life follows fiction sometimes. But the most important and critical point that the book makes is really about trust.

The basic idea of societal trust is something that I've discussed before here, and I got many if not most of my ideas on the subject from this book. (Yes, that's right- John Ringo is indirectly responsible for these rants. One might think he has a lot to answer for, eh?) The concept of social trust is paradoxically very hard to explain, yet extremely easy to understand. Essentially, we trust those who look, act, and think like us; we distrust those who are "different" from us.

You see instantly just how different a high-trust society is from a low-trust one the moment you take a trip down to, oh, say, Plano, TX and compare it with, say, Manhattan, NY. Certainly there is a far greater amount of diversity in the latter locale; but you'll quickly realise that nobody here actually likes anyone else. And that is because there is nothing particularly common binding people together in big multicultural cities.

Societal trust has declined at an astonishing rate, from what I can see, in the ten years or so that I have lived in this country. The problem is getting worse every single day, and it will take wrenching changes to the entirety of American society to reverse that problem- along the lines of forced mass expulsions of immigrants and refugees from just about every corner of the country.

This is not a pleasant thing to anticipate. As the book points out, blind adherence to the false gospels of Diversity and Multiculturalism will inevitably lead to fratricide and war- and that is precisely the spectre we are faced with today. The Red Horseman of War is already riding across the lands of the West; we can only hope and pray to the Lord that His mercy will allow the USA to avoid the near-apocalyptic scenarios depicted in the book.

But I wouldn't bet on it. John Ringo got so much right in that book that I've got an eerie feeling that, if by some unholy mistake, the Hilldebeast wins the election in November, 2019, and not 2030, will mark the end of these United States as we know them.