I had a different stake in mind...

I was attending church services at the temple of the Iron God on Sunday, as usual, when I saw an ad from the Lizard Queen herself pop up on one of the TVs during a CNN commercial break. It had something or other about how there is "too much at stake", followed by some other blather which I didn't bother to watch, and then it showed that the ad was paid for by the Clinton campaign.

I have to admit that I crossed myself the moment I realised it was a Clinton campaign ad. And then I simply burst out laughing (no doubt to the utter bemusement of that very pretty girl doing what she considered to be "leg presses" with two wheels on each side of the machine, but with barely four inches of movement in each rep), because the image that entered my mind was of a very different type of stake.

The kind that you would use for dealing with, say, this: 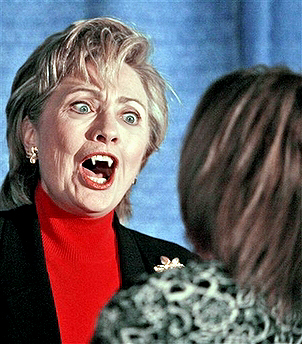 Now, for the record- and just in case any halfwit SJW gets the wrong idea- I do not advocate physical violence against any political candidate. My deeply held belief that Mrs. Clinton is a sociopathic liar, a criminal, a power-hungry, deeply untrustworthy, utterly unprincipled, and frankly catastrophically bad candidate for political office, does not in any way conflict with my even more deeply held belief that violence against political candidates in even the most nominal Western liberal democracy is wrong.

All of that being said (in one hell of an example of a run-on sentence), it is frightening, is it not, just how much HRC looks like a cast extra from Salem's Lot?
Email Post
Labels: douchebaggery gym idiots politics SEXISS