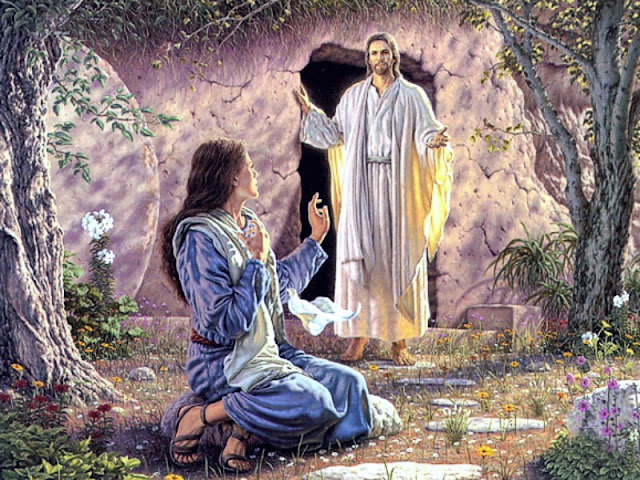 After the Sabbath, at dawn on the first day of the week, Mary Magdalene and the other Mary went to look at the tomb.

2 There was a violent earthquake, for an angel of the Lord came down from heaven and, going to the tomb, rolled back the stone and sat on it. 3 His appearance was like lightning, and his clothes were white as snow. 4 The guards were so afraid of him that they shook and became like dead men.

5 The angel said to the women, “Do not be afraid, for I know that you are looking for Jesus, who was crucified. 6 He is not here; he has risen, just as he said. Come and see the place where he lay. 7 Then go quickly and tell his disciples: ‘He has risen from the dead and is going ahead of you into Galilee. There you will see him.’ Now I have told you.”

8 So the women hurried away from the tomb, afraid yet filled with joy, and ran to tell his disciples. 9 Suddenly Jesus met them. “Greetings,” he said. They came to him, clasped his feet and worshiped him. 10 Then Jesus said to them, “Do not be afraid. Go and tell my brothers to go to Galilee; there they will see me.”

For four years now, I have written to celebrate Easter and what it means. Yet I am not a Christian. I do not pretend to follow the Christian faith- mostly because I cannot yet claim to fully understand it.

Why, then, do I write to celebrate an event that, by rights, I should be viewing with extreme scepticism? Which I did view with utter disdain for over ten years when I was an atheist?

The answer is simple: ever since I turned away from atheism and slowly came to accept the presence and power of a Living God, the harder I look at Christianity, the more sense it makes.

A very large part of "making sense" of Christianity, at least for an outsider, involves reconciling events that seem impossible to an otherwise rational mind. The most important such event is, of course, the Resurrection of Jesus.

The notion of a man rising from the dead should be flat-out ridiculous. No rational mind would accept such nonsense- that which is dead, and in the case of Jesus Christ, has been dead for days, must by rights stay dead. That which is inanimate cannot suddenly be brought back to life and then disappear. There is no rational explanation for such a thing.

The only way to explain such an event is to resort to the supernatural.

This is where a great many atheists fall down and are unable to proceed further. Claiming- correctly- that no mortal man could survive crucifixion, they claim further that resorting to the supernatural simply shows Christianity to be a poorly thought out sham, a fairy tale that no serious mind should accept. There are atheist arguments aplenty that the Gospels essentially fabricated the entire story of Christ's return in order to provide a fig leaf of cover to a faith that does not make sense.

I have even seen and heard arguments that either Christ didn't actually die and that some other poor bastard took His place on the Cross and was then sealed away in the tomb (which by the way is the Islamic take on the Crucifixion).

What they fail to appreciate is the background to the Lord's Resurrection, and the formidable pile of evidence that we have before us that confirms that Christ did, in fact, rise from the dead.

The physical tortures and ordeals endured by Jesus were appalling beyond measure. If we are to apply the filter of reason to what He went through, the only reasonable conclusion that can be made is that the very fact that He lived long enough to die on the Cross is astonishing in and of itself. There is simply no way that a mortal man- even one with a spark of the Divine within Him- could possibly have lived through what Jesus went through.

Even if one takes the absurd at face value and assumes that Christ somehow survived the scourging, the beatings, the extreme physical toll of carrying His Cross, and His crucifixion itself, how does one reconcile His Resurrection with the fact that His tomb was sealed with a boulder?

No matter where one looks, one is confronted with precisely two outcomes: either the Resurrection was the greatest fraud ever perpetrated upon Mankind, or it was the greatest miracle that this world has ever seen.

The very impossibility of the Resurrection, combined with the evidence that it took place, is the strongest possible confirmation that one could have for a rational case for faith in Christ.

The most important thing about the Resurrection for me, though, is the fact that without it, the entire construct of Christianity falls apart.

Nothing about Christianity's past or present makes sense without this one pivotal event. Without, it makes no sense that one man could possibly overturn centuries of Biblical Law and be taken seriously for doing so by hundreds and thousands of followers.

Without, it makes no sense that the Apostles, who started out as weak and fearful men who crumbled under the first sign of pressure, could become lions among men, who went forth and preached the Gospel of Christ, and died in terrible and painful ways with smiles upon their faces and His name upon their lips.

Without, it makes no sense that people could possibly believe that their souls could be redeemed by following these rituals and observances and codes of moral behaviour instead of those. One might just as easily ask why it would be better to follow Christ's teachings instead of picking one of the Hindu Vedas- hell, if you want a "pick-and-choose" religion that you can tailor to your own personal needs and desires, just go for Hinduism. Why bother with Christianity at all, what with its uncomfortable talk of sin and persecution and whatnot?

But with the Resurrection, Christianity makes complete sense.

With the Resurrection, Christ gives us both hope and certainty. We are given the hope of eternal salvation through His Word, but we are also given the certainty, the absolute and indisputable proof, the irrefutable evidence, that He was right.

And with the Resurrection, we know that, no matter what else happens, no matter what manner of evil Man inflicts upon Mankind, no matter how the enemies of Christ seek to brutalise His followers, they will not win.

Christians are being persecuted for their faith as never before in history. They are under attack everywhere. There is no safe haven for Christians anymore. A terrible, heretical perversion of Christianity, which we call Islam, threatens the very gates of Jerusalem every day. To be a Christian- a real Christian- in the modern world is to be spat upon and derided for following a faith that the globalist elites of this world see as outdated, outmoded, and dangerously divisive. The very Mother Church herself has been infiltrated by sodomites and Marxists to the point where the Gospel as taught by the Magisterium is itself being corrupted in the name of "social justice".

And yet... the promise that Christ made remains true. He fulfilled that promise at the cost of His own life, and proved beyond any shadow of doubt that He was right.

What then is there to fear?

The darkness is coming. Of that, there can be no doubt. But always remember that the light will follow it. The light shines in the darkness, and the darkness has not overcome it.

May the Father and the Son bless you and yours on this day, and every day to come.