Is anyone looking forward to it?

Here, in the form of a single picture, is every reason why I am not: 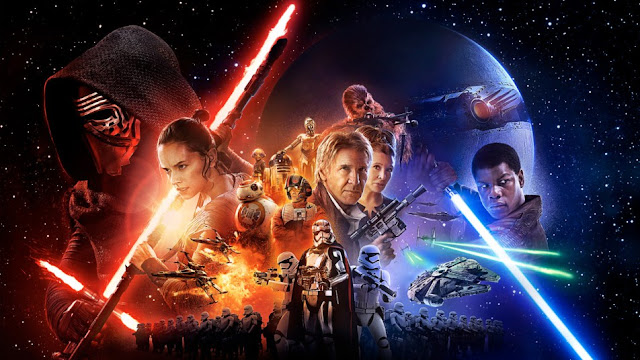 Why does this poster fill me with foreboding?

Well, because this is what the poster looked like for Return of the Jedi, filmed over 30 years ago: 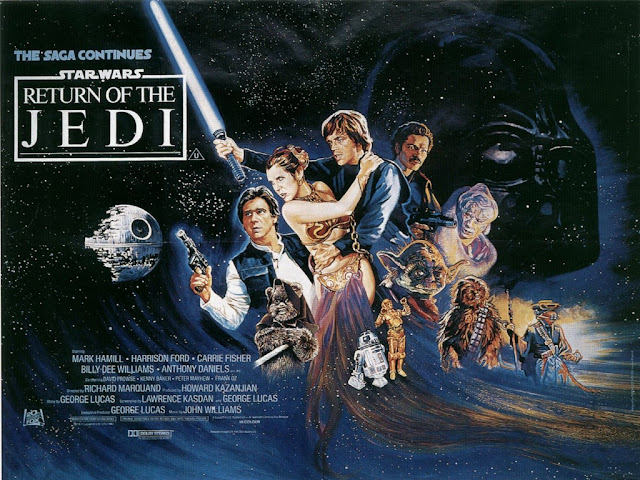 Like, say, how almost every single major motif of the last great Star Wars film is repeated in the new one?

The Last Black Man in the Galaxy? Check.

A superweapon made out of world-destroying assbeat? Check, check, and triple muddapuckin' check!

In other words, the new Star Wars film is going to do for that beloved and wonderful sci-fi universe almost exactly what J. J. Abrams did for the Star Trek universe.

There are differences, to be sure. With Star Trek, Mr. Abrams and his writers essentially "rebooted" the canon by essentially altering the entire timeline of the series and starting over in a "parallel universe", of sorts. With Star Wars, on the other hand, all indications are that Mr. Abrams is simply going to pick up 30 years or so after the last film left off.

Here is the problem, though: with Star Trek, Mr. Abrams had every opportunity to invent something totally new and interesting, a different and unique direction in which to take one of the greatest franchises and stories ever written. But he didn't. He simply created a pastiche of what had come before. That was true of his first Star Trek film, in which he simply scrambled a few of the characters around a bit and came up with a somewhat different take on the Vulcans and Romulans than had existed before, but kept everything else basically the same.

And it was absolutely true of his second film, Star Trek: Into Darkness. That film was basically just a pastiche of Star Trek II: The Wrath of Khan, which is hands down the best ST film ever made. It even preserves much of the same dialogue- but without the emotional weight, the great chemistry between Spock and Kirk and Bones, and even dispenses entirely with the pretense that the Federation is some sort of galaxy-spanning peaceful socialist empire by getting rid of any hint of "peace" and going straight into the "empire" bit.

Don't even get me started on the plot holes in both movies, either. You could drive a Death Star through them. TWICE.

Sadly, there is every reason to believe that Mr. Abrams will commit exactly the same mistakes with the new Star Wars film:

As I've said before, I am delighted that Mr. Abrams and the Disney creative team are basically going to take nearly 40 years' worth of expanded universe canon, and put it all feet-first through a woodchipper. The amount of  awful, horrible, terrible, miserable, atrocious, stupid, ridiculous, idiotic, USELESS, EXECRABLE GARBAGE that so badly mangled the canon alone, justifies euthanasing it all- rare outstanding moments by authors like Aaron Allston and Timothy Zahn notwithstanding.

However, such an opportunity should be used to build something new and fresh and amazing. Instead, what do we get?

... Which by the way is basically a very quick rundown of the entirety of the first three films.

Look, I get it. I am in a distinct and severe minority here. EVERY NERD, EVER, wants to see this new film. Everyone wants to see what J. J. Abrams can do with fully up-to-date modern technology, real actors and not wooden manakins (see what I did there?), and NO FREAKIN' JAR JAR GODDAMN BINKS. (No pod races either... I hope. And absolutely, positively, NO WAY NO HOW NOT GONNA HAPPEN, no Jake Lloyd as a whiny stupid face-punchable Anakin Skywalker!)

I left the Star Wars universe behind about 7 years ago after finally waking up to the severe and repeated abuse that its creators had subjected us fans to in the form of dreadful EU fiction, silly merchandise, and absolutely terrible prequels that turned a legendary, magnificent story about a titanic, galaxy-spanning battle between good and evil into, basically, a 7-hour lecture about the perils of democracy. (Not that this is what George Lucas actually intended, but that's what it essentially came down to.)

Don't get me wrong, I'll still go see the film. But I'm going to do so with the same feeling of mild dread that I got when I went to see the third Hobbit film, which if The Master were alive to see today, would have utterly horrified him because of its cack-handed treatment of the greatest fantasy story ever told.

I would love to be proven wrong. But somehow, I seriously doubt that I will be.