The princess and the shiv 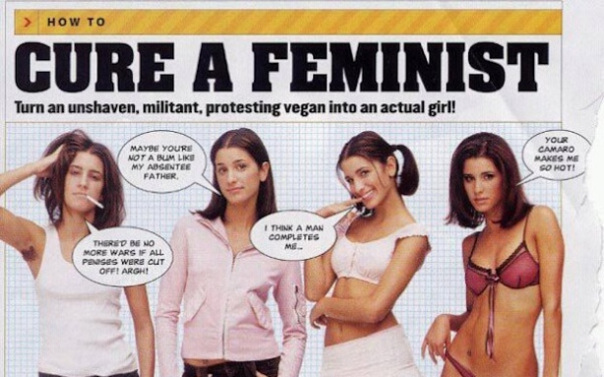 Somewhere in Washington, D.C., or wherever the hell it is that Chateau Heartiste is based, He-Whose-Name-Keeps-Changing must be positively crapping himself with delight to see that SCIENCE has once again confirmed he's been preaching for years:

Whether they are senior citizens, middle-aged fathers or barely able to drink legally, all men are inherently attracted to young women who are in their early 20s.

In his book Dataclysm: Love, Sex, Race, and Identity - What Our Online Lives Tell Us About Our Offline Selves, author and OKCupid co-founder Christian Rudder used the data preferences found on his dating site to determine that men find women between the ages of 20 and 24 most attractive - no matter how old they get.

After [a man] hits thirty, the latter half of [OKCupid's] age range (that is, women over 35) might as well not exist,' Christian explained in an excerpt of his book, which was shared on Jezebel.

'Younger is better, and youngest is best of all, and if “over the hill” means the beginning of a person’s decline, a straight woman is over the hill as soon as she’s old enough to drink,' he noted.

A majority of the groups of men between the ages of 20 and 50 prefer women to be 20, while 21 was the next highest reported age.

And only one age group, 45, chose 24, the highest age reported, as the one that looks best to them.

Meanwhile, Christian found that women want a 'guy to be roughly as old as she is'.

'This isn’t survey data, this is data built from tens of millions of preferences expressed in the act of finding a date,' he said.

According to his research, women like men to be slightly older than them until they hit their 30s. Then they become interested in men who are their own age or slightly younger.

By their 40s, women are most attracted to men who are two to eight years younger than they are.

But an eight year age difference is nothing compared to the 28-year age gap between 50-year-old men who think 22-year-old women are ideal.

'Another way to put this focus on youth is that males’ expectations never grow up,' Christian wrote. 'A 50-year-old man’s idea of what’s hot is roughly the same as a college kid’s.'

This vast difference in the sexual age preferences of men and women was codified into handy visual form by Rollo. That picture, which is known as his Sexual Market Value (SMV) graph, is essentially a heuristic derivation of what the data above tell us in empirical form:

Lo and behold, the peak SMV points coincide almost exactly with those from the OKCupid data set. Which is rather impressive, given that Rollo Tomassi put together that graph back in 2012, and did so based mostly on heuristic observation, without perhaps quite the same level of access to data that Christian Rudder had when writing his book.

This is no coincidence.

The beauty of SCIENCE- more specifically, of scientody, the scientific method- is that it keeps nonsensical, pseudo-scientific ideologies like feminism in check, in the most brutal way possible. The findings above could not be more destructive to the poisonous ideals of feminism if they had been coded into human form, handed a pig-sticker, and set loose upon the nearest college-campus feminist.

Feminists- specifically, third-wave feminists- have been trying to argue for the better part of twenty years that there is no inherent difference between men and women. Their "arguments", for lack of a better word, centre around their assertion without proof that gender is a social construct. In so doing, they ignore simple biology, empirical evidence, and anecdotal proof before their very eyes that they are wrong. Yet they base their entire, er, "philosophy" upon a non-existent foundation. It should come as no surprise, then, that their entire intellectual framework is utterly incapable of handling even the slightest shock.

If, on the other hand, one starts with the basic premise that men and women are different, it follows logically that they have different desires and preferences, and value different things to different degrees. Unlike third-wave feminist arguments, these are testable postulates that can be weighed and measured against the evidence.

The evidence very clearly tells us that the null hypothesis, " there is no inherent difference between men and women and their sexual preferences", is plainly wrong. Therefore it needs to be thrown out.

But of course, that's LOGIC. And LOGIC is oppression of WOMYN because it is a masculine construct. Or... something. I'm not exactly up on my feminist terminology, since I have rather better things to do with my time.

If one is cold-blooded and logical enough, one can see sexual relationships between men and women as voluntary economic transactions. Each person involved in the transaction trades something of value to him or her, for something he or she values more in the other. Reducing everything down to this economic framework requires us only to explore the valuable commodities in question.

By the time young men reach their early thirties, they tend to be firmly established in their careers and, assuming that they haven't done anything too monumentally stupid, have built up a base of personal savings and assets that will continue to grow and generate wealth over time. (With relation to the average American male, this may be too strong an assumption; the average American is addicted to credit in ways that appall more frugal Asian types like me.)

Women, on the other hand, have a very limited window of youth, beauty, and fertility to exploit. They can choose to squander all three if they wish, through poor diet, bad lifestyle choices, and highly promiscuous sexual behaviour. These may not be advisable choices to make, but they are legitimate ones, since adult women have agency and free will just as adult men do. The problem is that if they do this, they damage the very things that men value the most.

And what the data and findings above tell us very clearly is that men value youth and beauty, no matter what their age. Women value security and comfort, which can be provided by high-status men with wealth and power.

Those findings will come as absolutely no surprise to anyone who is paying attention. They will come as a huge shock to women who have been told all their lives that they are special and wonderful no matter what they look like and how they act. This is simply not true, and the sooner we all stop telling our daughters and sisters this outright lie,the happier they will be in the long-term.

Otherwise, daddy's beautiful little princess is going to feel the very real and very sharp stab of the shiv of reality the day she turns 30 and discovers that the high-status men her age and older, whom she is targeting for a life of "wedded bliss" after years of partying and sleeping around, are ditching her in favour of young, tight, firm, bouncy 20-year-old coeds.