It's not JUST about intelligence

A boffin by the name of Prof. David Bainbridge caused a bit of a stir in the mainstream media when he released findings that, among other things, claim to support the view that men prize brains over breasts:

Although having a large bust and never-ending pins are deemed by western culture as the epitome of femininity, when choosing a mother for their children, men look for brains first.

Professor David Bainbridge, of the University of Cambridge said that intelligence is by far the most attractive quality for men looking for a long term partner because it demonstrates that his chosen partner is likely to be a responsible parent.

It also suggests she was brought by intelligent parents and so was likely to be well fed and looked after in childhood, and so healthier. It may explain why a man like George Clooney ended up marrying human rights barrister Amal Alamuddin. [Didact: Um, no, the fact that he wants to go into politics explains why he ended up marrying her.]

Prof Bainbridge said men actually do not care how large breasts are as long as they are symmetrical [Didact: that's right, Wonk-tits, get this through that sawdust that's in your head] while for legs, it only matters that they are straight, as bent, uneven legs suggest a developmental illness, like rickets.

“Breast size doesn’t matter,” he told the Hay Festival. “Actually large breasts are more likely to be asymmetric and men are more attracted to symmetry. And they look older more quickly, and men value youth.

“And men are not looking for long legs. Straight legs are a sign of genetic health so that is something that is more attractive, but surveys have shown most men prefer regular length.

“The main thing that men are looking for is intelligence. Surveys have shown time and time again that this is the first thing that men look for. It shows that she will be able to look after his children and that her parents were probably intelligent as well, suggesting that she was raised well.

Men also look for symmetry in facial and bodily features which suggests ‘stable’ genes and youthful partners. Studies have shown that men who are four to five years older than their partners are more successful.

However men do like women to be curvaceous with voluptuous thighs and bottoms, and a waist that is much slimmer than their hips.

Carrying a bit more weight on the thighs and the bottom suggests that a woman has stored enough fat during puberty to adequately provide for the huge requirements of a growing baby.

Colour me suspicious. Not least because, in another Telly article on the same subject, there is a poll embedded in there which actual men did in fact vote on whether they preferred looks to brains, and... well, see for yourself: 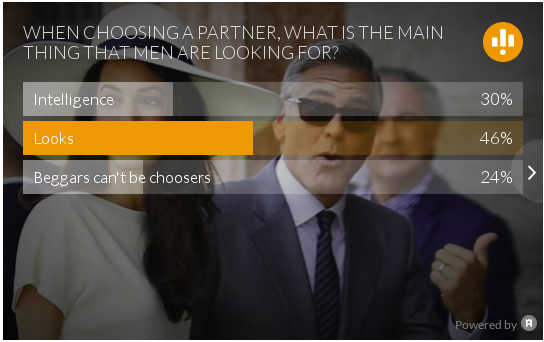 So, on the surface of it, either this egghead's complex and prestigious study is about as methodologically watertight as a colander, or there is something more going on here.

The funny thing is, Prof. Bainbridge's other results confirm virtually all of the accumulated wisdom within the Androsphere concerning what men prefer when it comes to the way women look. So clearly, he isn't talking out of his ass. At least, not entirely.

For instance, Prof. Bainbridge argues that women with symmetric figures are preferred over women with specific outstanding features. This is not in the least bit surprising, and has been repeatedly confirmed by studies that are both more and less rigourous than the one referenced above.

The redoubtable Blackdragon did just such a study recently. It was by no means scientifically rigourous; it was a straight opinion poll, it did not have a control group, it did not attempt to verify whether or not those who voted were in fact men, and it did not pretend to be even slightly objective.

Yet, overwhelmingly, the findings supported and agreed with Prof. Bainbridge's assessments:

Last week many of you gentlemen participated in a poll regarding the female body type you found most sexually attractive. An overview of the seven body types is pictured above and you can click the image to zoom it. If you want more detail on the specific descriptions, please refer to that post.

After several thousand votes, here is what you guys said are the most sexually attractive body types:

So if Prof. Bainbridge was right about the types of bodies that men prefer, why is he so wrong about whether men prefer intelligence over looks?

I think it is because he didn't tell us the full story.

If you ask men- and by this I mean real men, not Gamma and Omega males- what qualities they most prefer in the women that they would most like to settle down with long-term, the answers will likely include the words, "someone who I can have a decent conversation with at the end of the day".

Thing is, this does not necessarily mean that said woman needs to be of high intelligence. Rather, it means that she needs to have a warm, nurturing, caring personality, combined with a modicum of intelligence.

And that is precisely what Prof. Bainbridge apparently didn't test for.

Sure, you'll come across the odd man or three who wants his wife or girlfriend to be nothing but a subservient doormat, who exists simply to wait upon him hand and foot, but then, those types of men tend to have some serious issues of their own to deal with. I'm writing from personal experience here; one of my blood relatives back in the old country is just such a man, and he is quite simply a failure as a human being.

However, what the study omits, or didn't bother to ask, is whether intelligence in a woman needs to be accompanied by certain other feminine virtues, such as domestic skills and an agreeable personality.

And that is the major mistake that the media and others have made in taking this study at face value. This is the one question that nobody seemed to bother asking.

If that question had been asked, the answers would have been very different.

The reality is that, as a general rule, women like to settle down with men whose intelligence exceeds their own. And that intelligence doesn't have to be just in terms of IQ, although it tends to be. Those who break this rule more often than not find themselves trapped in unhappy marriages with men that they can't stand, because they are intellectually superior to them. Such a woman finds herself in the position of leading her man, having to take the big decisions that he cannot take because he is not capable of taking, nor is qualified to take.

That is a deeply unnatural position for a woman to be in. And that has led to the breakup of many a relationship, and many a marriage.

As for men, well, again, it's quite simple. No man in his right mind would ever want to come home from a long and exhausting day at work, followed by a hard evening working out in the gym or on the sparring mat, to deal with a man dressed as a woman. No such man would ever want to have to come home, make his own dinner, and then spend the rest of his evening debating the finer points of Aristotelian rhetoric, or the current state of quantum physics, with a woman who is as blunt, as uncompromising, as stubborn, and as abrasive as a man can and should be.

This is the mistake that highly intelligent women keep making. They keep thinking that, in order to be taken seriously by men, they need to act just like men, both in their professional and private lives.

The simple fact is that, if men are presented with a straight-up choice between a high-IQ woman with no domestic skills and no feminine traits but stunning good looks (and good luck finding that combination outside of the unicorn stables), or a still-intelligent but lower-IQ woman with lesser looks but amazing cooking abilities and a warm, nurturing, loving personality, we will ALWAYS choose the latter.

Women must always remember that men prefer three qualities above all else when it comes to the opposite sex: youth, beauty, and femininity. That's about it.

The third quality, femininity, is the hardest to nail down, but it is by far the easiest to get wrong. And that is the critical fact that Prof. Bainbridge and his much-ballyhooed study evidently forgot to account for.

The bottom line is that highly intelligent women are at a significant disadvantage relative to their less intelligent peers. They have been taught all of their lives that they are special, that their talents are special, and that they deserve only the best things in life because of their talents. But when it comes time to actually find a man and settle down, those very things will work against them, and they'll find themselves losing out to the women who concentrated instead on maintaining their youthful looks, their beautiful symmetric proportions, and their domestic skills.