The elites are about to wet their short trousers

It would appear that the Greeks and the Germans between them are hell-bent on doing everything they can to destroy the European single currency.

Neither side's intransigence and belligerence should come as any kind of surprise, and if you look carefully at the numbers, this will rapidly become obvious.

The German government knows damn well that if Greece defaults on its obligations to repay loans, debts, and bailout funds to the rest of the EU, and in particular to Germany, then German taxpayers would suddenly realise that they are on the hook for something approaching US$100 billion in liabilities. They'll never see a single red (Euro) cent of that money.

To put that into an American context, that would be a bit like Goldman Sachs defaulting tomorrow, and the average American waking up to discover that he or she is directly on the hook for losses on Goldman's gigantic, indecipherably complex, highly opaque balance sheet. If that happened, and American tax dollars were required to bail out Goldman, there would be bloodshed and riots in the streets- with complete and total justification.

In fact, in Greece's case, the numbers are far worse than anybody realises. Take a look at the graph below from the Wall Street Journal. This gives you an idea of just how much the Greeks have to pay up over the next few years- and remember, their economy only produces about US$267 billion a year. 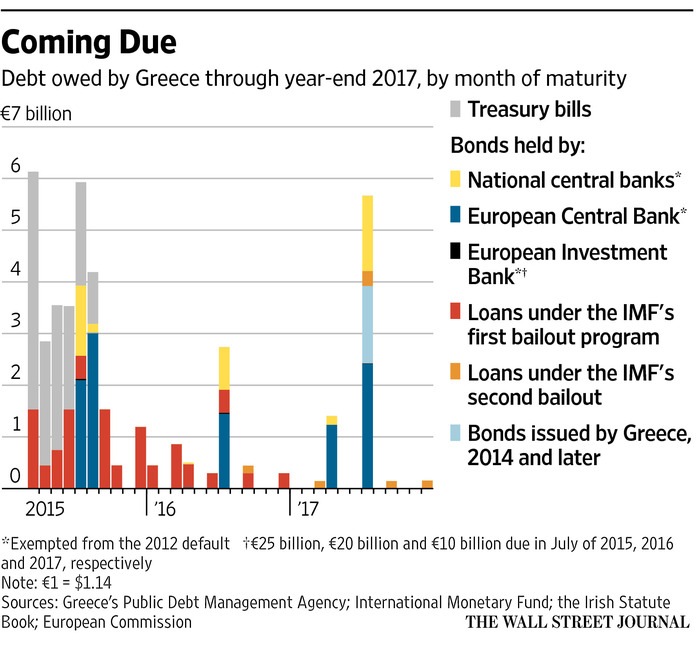 Now take a look at the potential total losses that could be triggered throughout the European banking system by a Greek default on its debt obligations:

The Target2 claims of the Bundesbank on the ECB system have jumped from €443bn in July to €515bn as of January 31. Most of this is due to capital outflows from Greek banks into German banks, either through direct transfers or indirectly through Switzerland, Cyprus and Britain.

Grexit would detonate the system. "The risks would suddenly become a reality and create a political storm in Germany," said Eric Dor, from the IESEG business school in Lille. "That is the moment when the Bundestag would start to question the whole project of the euro. The risks are huge," he said.

Mr Dor says a Greek default would reach €287bn if all forms of debt are included: Target2, ECB's holdings of Greek bonds, bilateral loans and loans from the bail-out fund (EFSF).

That figure is approaching TARP-like levels of insanity. And unlike the US, which can basically just print its way out of a crisis- not that this is a good idea, mind you- Greece has no ability to inflate away its debts.

Bottom line is that the German people cannot, and must not, be forced to pay for the follies and vices of others. Yet this is exactly what the entire European Monetary Union system has always been designed to do. You'll never actually hear any of its architects say so in public, of course, but the goal of the single European currency always was to socialise risk and remove sovereignty from national governments to transnational, unelected, unaccountable bodies like the ECB.

The fundamental problem with the entire single-currency experiment was predicted pretty much from the outset by heterodox scholars, who warned that a pan-European currency would basically encourage the formation of massive investment bubbles. They were right and the neo-Keynesians who created this gigantic economic death-trap were wrong.

To understand exactly why Greece is in the pickle it's in today, you have to take a (short) detour into Austrian economic theory.

Austrian economics has always revolved around the concept of time preferences. A society with high time-preferences simply prefers current consumption over future consumption. Such a society is generally marked by a poor work ethic, a record of political instability, a lack of strong legal protections for private property, and a currency that does not hold its value well. By contrast, nations with low time preferences show the exact opposite characteristics. Time preferences are, of course, best reflected by interest rates in an economy; the rate at which you can borrow money gives you a good idea of how likely people think you are to pay it back.

When countries that are judged by their people and by others around them to be unlikely to repay their debts, are suddenly given a rate of interest far below what the market would charge them, by virtue of monetary union with a country that does not and will likely never have problems repaying its debts, the inevitable result is that said countries will always go on massive investment and spending binges.

The crushing economic depression we're seeing in Greece today is a direct result of their inability to discipline themselves, and they are now paying a truly terrible price for their lack of foresight.

So what is the solution?

Well, it's quite simple: default, leave the EU, reinstate the drachma, and rebuild.

There is no legitimate reason whatsoever for the Greeks to remain shackled to a European monetary infrastructure that daily destroys their sovereignty and renders invalid the will of the people. Nor is there any reason at all for the people of Germany to have their money and their taxes held hostage by the threat of a Greek default. Let both parties go their separate ways, and let this absurd house of cards that we call the single European currency collapse, as it always should have done.

Don't for one moment think that a Greek default would be quick or easy. Iceland discovered that defaulting means being locked out of international markets for a few years, but by defaulting, devaluing their currency (massively), and writing off the malinvestments that went sour on them, the people of Iceland went back to building a real economy that produced real goods and services. If Greece defaults, the shockwaves will cause tremendous financial damage, but the sooner Europe bites the bullet, accepts the losses, and begins rebuilding, the better; delaying the day of reckoning will only increase the final cost.

By fighting to preserve the European single currency at all costs- at any cost- the Germans are imposing financial conditions upon Greece that are truly impossible to bear. I saw what severe austerity did to Indonesia during the Asian Financial Crisis. The results were not pretty. It took Indonesia over a decade to recover to pre-Crisis levels of employment, output, and growth; in some ways it still hasn't recovered.

I'm not saying that Greece can avoid painful and necessary structural reforms by exiting the EMU- those will have to happen anyway. Spending has to be brought under control, debt has to be paid off, taxes have to be cut, and stable money has to be introduced. The entire Greek economy would have to be put through the wringer, and that will be unbelievably painful. But at least the Greeks would get a chance to do this on their own, without being held hostage by Germany and the other "Northern" EU nations.

Ultimately, the question of abandoning the European pipe-dream comes down to a decision about whether one's nation should be free, or enslaved. To my mind, that's not a difficult decision to make.
Email Post
Labels: economics finance government stupidity human stupidity liberal stupidity