Guest Post: Feminine Decline in the Work Force by Stephanie

[Following on from the launch of Stephanie's new blog, I invited her to contribute a guest post as a way of getting the word out about her new venture. Now I don't pretend to be an influential blogger- I leave that to better and more capable (and more frequent) writers like Vox and Roosh- but I do hope to see more guest posts in the future from people who have interesting things to say. Stephanie is one of those, so I'm very pleased to present the first of two guest posts from her, presented here unedited and in full as I had promised her. You can of course find both posts at Ready To Be Caught. Also note that there will be a post up here shortly on a number of subjects discussed by Stephanie, especially those relating to women in the workforce, so stay tuned for that. Readers with their own blogs interested in presenting guest posts can do so at any time via the email contact details at the top left.]

FEMININE DECLINE IN THE WORK FORCE 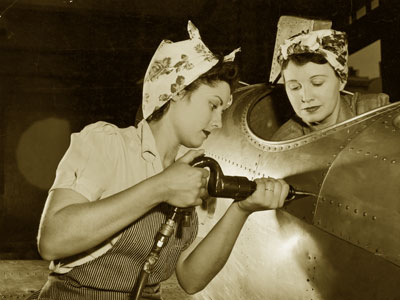 The image of women working has greatly changed since the initial Rosie the Riveter Era during World War II. Prior to the Boomer Generation entering the work force at great numbers, many women flourished working. My great-grandmother was a working woman, a wife, and mother. She taught primary school in a small town starting in the 1930's. I still have her letters of recommendation from her employers. She was remembered quite fondly by her community and former students.

I had the privilege of meeting many of her former students through school projects with Veterans. Many of our town's World War II Veterans at the local VA had been her students. It was a great piece of family history to learn as a teenager. The amazing story attributed to my grandmother and her being one of the first wave of women working, was the stark contrast of women working today. During her time as a college girl and school teacher there was no illusion of "choice". She became a teacher in the middle of the Great Depression. My great grandfather at the time, had become one of the train riding migrant workers in California. They were not changing the gender roles of America. They were just doing what was necessary to survive, while living 3,000 miles away from each other.

Once manufacturing in Detroit and Lansing started to recover, my grandfather returned home to his family farm, and married his sweetheart. They had two boys while she taught school and he worked as machinist in a factory. My grandmother raised two boys into successful men, retired after decades of being a teacher, and was married to my grandfather for over 50 years. She never had to choose one role over the other. She never had to sacrifice. She never had to compromise herself as a woman to have a job. She ended up dying in her 80s after enjoying a very fulfilling life. My grandfather died three days after her, before she could be buried, from a broken heart.

Much of the trends that were started in my great-grandmother's era continued throughout two decades. Many women went to college, mostly all female colleges, and took on relatively what was deemed "women's work". The most popular jobs being homemakers, teachers, nurses, and administrative work. These were the typical 9-5 jobs. Many were able to lead happy lives going to work as what we would deem now as part-time jobs. There was a structure in place where many young women would go to college to learn, not for the sake of career building, but to learn to maintain a home. The duties most women had to preform were more time consuming. Prior to the 1960's a woman's ability to stay out of the home for longer periods were hindered by a large household work load. Something many women today take for granted are machines of modern convenience. Dish washing machines, washer and dryers, vacuum cleaners, and two cars were not a luxury most could afford.

By the early 1960's all that had drastically changed. Manufacturing in the USA and made in USA had build up a wealthy and sturdy middle class. The frugal characteristics and cheap goods made possible by the previous generation, had paved the way for women to work outside the home more. Many universities were built and women were able to receive grant money that the federal government had only previously offered to STEM degrees. Women were for the first time in history able to have careers.

Throughout much of the 1970's and 1980's co-ed universities were becoming popular along with women leaving their parents home and setting off on their own. The transfer of women living at home, then moving in with their husbands as newlyweds, declined rapidly. Cheap housing that sprang up in the early 1970's made it possible for women to live on their own for the first time. They were on the brink of creating a new type of womanhood. In the meanwhile many young women traded in boring femininity for the newly unexplored sexuality. They no longer wanted to be the traditional housewives as their mothers had been. That lifestyle was viewed as outdated and shallow.

Popularity of the pill took away the consequence of unplanned pregnancy. Women were able to choose different when it came to lifestyle and choice of husband. Being a provider and a gentleman willing to wait was no longer a must. Killing off femininity happened very quickly. As the world turned into a constant career and materialistic binge, children started growing up in empty homes. For nearly 30 years many children were raised in the structure of public school, television programming, and a new latch key childhood.
Email Post
Labels: feminism game philosophy red pill