Book Review: The Line Must Hold by Jay Allan

[It is waaaaaay past time that I started posting some book reviews again. In fact I'm at least 8 books/albums/films behind in terms of posts, so if you see a seemingly never-ending series of reviews bombarding this place over the next few days, well, there's a good reason for it. Don't worry, I'll get back to my irregularly scheduled bouts of cranky social commentary soon enough.] 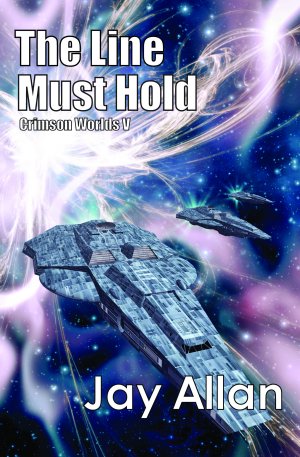 It's been about 8 months since I first started reading Jay Allan's "Crimson Worlds" series, starting of course with his excellent Marines. We are now six books (and counting) into this series, and I have to say that I'm amazed that one author can continue to maintain this level of quality and skill in his writing. He's doing a great job building a consistent and believable sci-fi universe, and he has done so by focusing on the four fundamentals of good sci-fi: plot, character, conflict, and technology.

The Line Must Hold is the fifth book in this rather good series, and comes after a change in direction in the fourth book. The first book was about Erik Cain and his development into a badass Jarhead. The next two books were about setting the tone and the canon of the universe that Allan has built- specifically, a canon that involves the inevitable conflict between fledging colonies in the outer reaches of human-explored space and their oppressive parent regimes on Earth. By the end of the third book, the Alliance government has suffered a spectacular defeat at the hands of the Marines and the Navy, and the Colonies have won independence, but at a terrible cost.

Then along came a complete curveball with the fourth book. This is when Allan decided to introduce the robot-warriors of an incalculably ancient race. The warrior-servants of the First Imperium push humanity to the breaking point, and it is only with truly terrible sacrifices that Erik Cain is able to stall the invaders. They are now poised to break into the heart worlds of human space, and it is up to Erik and his Marines to stop them cold and destroy them.

Such is the scenario that confronts us in this book. Cain and his Marines are dug in on the resort world of Sandoval as part of a strategy to hold the Line- a chain of three worlds and warp nodes that control the ability of the First Imperium's fleets to attack the homeworlds of Man. Augustus Garret and Terrence Compton are positioned with the combined might of humanity's naval forces in space to attack and harass the enemy's landing craft wherever possible. And two other worlds in the Line are similarly fortified, with the intent of turning all three into a meat grinder (figuratively speaking) for a relentless and unstoppable enemy.

And all of it still might not be enough.

The general plot of this book is, unsurprisingly, somewhat predictable. The plucky, outnumbered, technologically outmatched humans still manage to put up a tremendous fight against a tactically moribund opponent and thereby somehow come up with an almost impossible victory. Yes, we've seen this plot many times before and yes, it's predictable. Yet somehow Jay Allan is still able to turn an otherwise generic plot into an exciting, action-packed, interesting story. He does so by ensuring that although the core story is predictable, specific events within that story are not. The action is intense, unpredictable, and extremely well-written. Even when Allan switches away from the main protagonists to look at the battles through the eyes of ordinary grunts on the ground, he finds a way to make you care about the soldiers fighting for their lives against the cold, relentless robot warriors who grind on heedless of casualties.

Characterisation has always been a strong point of this series, and Allan shows no sign of deviating from the skill in writing interesting, believable heroic characters that he has shown throughout the first four books of the series. You genuinely do care about what happens to the main protagonists- Erik Cain, Augustus Garret, Terrence Compton, Elias Holm, and others. You really come to loathe characters like Gavin Stark and Alex Linden. And even when Allen introduces new characters into the mix, he never quite loses the plot the way George R. R. Martin did so completely and so catastrophically with his new-chapter-new-character approach in the last two books of his now-apparently-moribund series.

This book also seems more tightly focused than its predecessors. With very few exceptions, the story focuses primarily on the hell of war on Sandoval's surface. It focuses primarily on Erik Cain, rather than on the ancillary characters that populated the last book. And by doing so, it turns Erik into something new and far more interesting than the merely heroic character that he was at the beginning of the series. The Erik Cain presented in this book isn't really human anymore. The death of his best friend and brother-in-arms in the previous book has clearly turned him into something terrifying, an avatar of death and destruction made flesh, a man with only one reason for existence: to destroy any and all threats to humanity. His lack of humanity stands in sharp contrast to the characters around him, as he routinely and, it would seem almost casually, orders brave fighting men and women to their deaths in seemingly pointless sallies against a seemingly invincible enemy.

Yet despite his almost unfeeling appearance, it becomes clear that Cain's strategy is to draw the enemy in, bog it down, and then tear it apart piecemeal. This is revealed right at the end of the book, where Cain personally leads the charge that he has been holding back for the entire story to take the fight straight to the enemy. And at last, the true character and heroism of Erik Cain is revealed, even as the last shreds of his humanity are almost destroyed in the process.

To my mind, this is the best book in the series that I have read thus far. It avoids getting overly caught up in the machinations of Gavin Stark, the way the last book did. It avoids bringing in too many secondary characters, again like the last book did. And it keeps the focus squarely on the combat and the desperate last stand of humanity against the overwhelming tide of an alien invasion. That renewed focus should serve the series well as long as Allan continues to hold to it.

Didact's Verdict: 4.5/5, a great book that reads very fast and is immensely enjoyable.