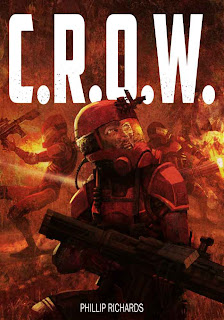 After tearing through Marko Kloos's Terms of Enlistment at what probably amounted to record speed a few weeks back, I was definitely hungry for more good, high-quality hard military sci-fi. And it took me a little while to find it, because that sort of book is easier to write than you might think. Basically all you have to do is throw together a bunch of motley characters in an interstellar war with aliens/bugs/rebels, ensure that gender equality is a major part of your story (after all, what would the modern Starship Troopers universe be without those co-ed showers?!), toss in some kind of improbable but not completely ridiculous loophole in Newtonian physics that permits FTL travel, and proceed with describing the horrors of war either in overly graphic detail or in detached, clinical terms that make it sound like you're just describing an everyday walk in the park.

If I sound cynical, that's because when it comes to great military sci-fi, I am. There are far too many pretenders out there, and really great mil-S/F books are as rare as they are amazing. True classics of the genre like Starship Troopers (the original version, written by Robert Heinlein, thank you very much) and The Forever War by Joe Haldeman are few and far between. Even great modern takes on mil-S/F like the Stars At War series by David Weber and Steve White have their flaws. Almost every modern military sci-fi novel has fallen prey to the flatly absurd idea that you must have female space marines and naval personnel- and that includes my beloved HALO series, where female SPARTAN supersoldiers (which I can almost believe, given the way the original SPARTAN-IIs were created) mingle with badass female marines and female ODSTs (which I flatly cannot believe at all). No matter which way you cut it, there is nothing realistic about the idea of women serving in front-line infantry combat. The political correctness of modern military sci-fi is also reflected in the fact that most modern series start out by pitting humanity against brutal, barbaric alien hordes, rather than the more likely outcome- humans fighting humans for control over the stars.

So when you come across a truly well-written, action-packed, deeply engrossing story like the one that Phillip Richards has written, that pulls no punches and doesn't try to be politically correct, it is most certainly worth reading and praising.

C.R.O.W. concerns the experiences of one Andy Moralee as he escapes the overpopulated, resource-depleted hellhole that is Earth and joins the Union dropship infantry. You see his world through the eyes of a scared kid who is bullied and beaten by his platoon, who knows he is completely out of his depth in a war zone, and who grows over time from just more fodder for the meat-grinder into a reluctant hero and leader. Even his designation as a C.R.O.W., combat replacement of war, is dehumanising. You follow this young man on his journey, and as you do, you see that Phillip Richards has done what only the best fiction writers can do- his journey becomes your journey.

Even the background to the novel isn't your standard set of sci-fi tropes; it's much better than that. Essentially, the European Union is now a major global and interstellar superpower- along with the Chinese, apparently. The Americans, interestingly enough, are nowhere to be seen at all. Neither are the Russians. The last great superpower, the Indo-Japanese Alliance, was defeated and destroyed by the Europeans in the last major war on Earth. The Chinese and Europeans were once allies, and as allies they attacked and conquered the colony of New Earth (better known to you and me as one of the planets in the Alpha Centauri system). And then, inexplicably, the Chinese turned on their allies, betrayed them, and in a brief, bloody, and brutal war, threw the Europeans back into space 2 years before the events of the novel.

Several of the usual mil-S/F tropes are present and accounted for- the scared new recruit, the dystopian future, the brutal horrors of war, the faceless and terrifying nature of a dehumanised enemy (mostly due to EU propaganda), and (of course) the aforementioned loophole in physics.

However, as I wrote before, this is not your typical by-the-numbers space marine novel. There is no gender equality going on here; the dropship infantry and indeed most of the military is a male-only institution. The only women in this book serve in the Navy; in fact I can only recall one, the ship captain of Challenger, the troopship that carries young Private Moralee and his squadmates to the battlefields of New Earth. Conscription is very much a reality in this world, and the only choice that any conscript has is whether to choose regular infantry or the much more dangerous, much more intense dropship infantry. For reasons known perhaps only to himself, Moralee chooses to be a Helljumper- an orbital assault specialist, trained to ride a dropship down and take the fight straight to the enemy.

The book starts by picking you up and dumping you right smack into the middle of the action. Moralee and his unit are dropped in to fight the Chinese occupiers of New Earth, and the book makes no apologies whatsoever when describing the horrors of the war. There is blood, guts, brutality, and extreme violence- all described with the vivid, adrenaline-fuelled accuracy that only a true soldier could deliver. For Phillip Richards is indeed a former soldier, and you really get the impression that he is essentially telling his own life story in a different, futuristic setting. Death and destruction are not sanitised at all in this book; this is raw, brutal, in-your-face violence, and there are absolutely no prisoners taken in the writing or in the action.

Then the book abruptly switches gears and takes you about 10 months into the past, to show you Andy Moralee's days as a trainee and recruit on the long voyage out to New Earth. The true nature of being a new boy in the military is revealed in often sickening ways. The bullying, the psychological torture, the violent initiation rituals, the hazing- it's all there, described in vivid detail. You get to see life in the military through the eyes of a true soldier, right down to the gear that troopers use. The weaponry is described with the skill of a true expert, unlike with other mil-S/F books; when Richards describes an assault rifle that uses magnetic acceleration to take tiny, half-inch steel darts and turn them into lethal (and lethally accurate) hypervelocity projectiles, with target-correcting software and gel-padded armour, you actually find yourself believing him.

Throughout the narrative, you really do get the impression that Moralee is frightened out of his wits at the idea of being in combat, trying not to stand out, trying to survive in an extremely hostile environment. Among the recruits, the coming war is represented as an opportunity for revenge against those who dishonourably betrayed the Union; but among the older veterans, the war is treated as just another exercise in corporate greed, started by faceless and nameless people back on Earth who send thousands of men to fight and die on an alien world with the stroke of a pen. You get to understand the anger and hatred that enlisted men feel for each other during their training days, when politics and hazing are such a big part of daily existence- and then you see how all of that goes straight out the window the moment the first shot gets fired, the moment the first man gets hit and goes down and the man who was beating you to a pulp in the locker rooms yesterday is now your brother and comrade-in-arms, the last remaining link to your humanity, the only person that matters now amidst the hell of war.

The last third of the book is where the war finally gets in your face, and you get to see and experience the horrors of war as though you are right there fighting alongside Moralee on the red soil of New Earth. This is where the real quality of the book becomes clear. Richards is one hell of a descriptive writer; you can see in your mind's eye the brutality of the war as you read descriptions of men reduced to flying bits of meat and bone by technological wonders spitting death and destruction from above. You can feel Andy's horror and sorrow at seeing his squadmates killed. You understand his rage as he charges the enemy and engages them at point-blank range. The images of men being blown apart, of limbs being shredded, of blood and guts flying everywhere, will stay with you long after you stop reading the book. The cowardice of men who abandon their comrades in battle and flee will make you angry, just as it does Andy. In every way, his experience of the war becomes your experience as you read this book.

For all of its incredible quality, though, there are flaws in the book. The most irritating by far are the errors of spelling, punctuation, and grammar. I have seen this repeatedly with almost every new, self-published author out there in the last couple of years, and I have very little tolerance for it. In this day and age of spell-check and grammar check, it should not be that difficult to produce a work where the spelling is consistent and correct.

This is a pretty minor quibble, though, because overall this is one hell of a great book. In many ways this book could probably be described as "We Were Soldiers in space". That comparison holds in both the description of the Chinese enemies and in the last few pages of the book. The Chinese are never described as inhuman monsters; the few Chinese soldiers that you do get to see up close through Andy's eyes seem just as scared as he is. The soldiers that he kills could easily have been just like him. And I guarantee you that you will come away from reading this book with a very sober, very raw appreciation of what real soldiers go through every day on the front lines when fighting other human beings. In the last few pages, Andy is taught an important lesson in the futility of the war, as he notes that the people of New Earth seem to be rather less than enthusiastic at the fact that they have been "rescued" by the Union. The words of a Sergeant in the book give real weight and meaning to that hostility: the people of New Earth came there to be free of the politics and misery of the old world, and now those same evils have come to them with the war. This is really the only point in the book where things get political, and not in a bad way at all.

Bottom line: if you like great military science fiction, and you're tired of the equalitarian, politically correct nonsense that passes for the majority of the genre's modern output, you need to read this book. It is completely worth the money that you will pay. In fact I am very much looking forward to reading the second book in the series.